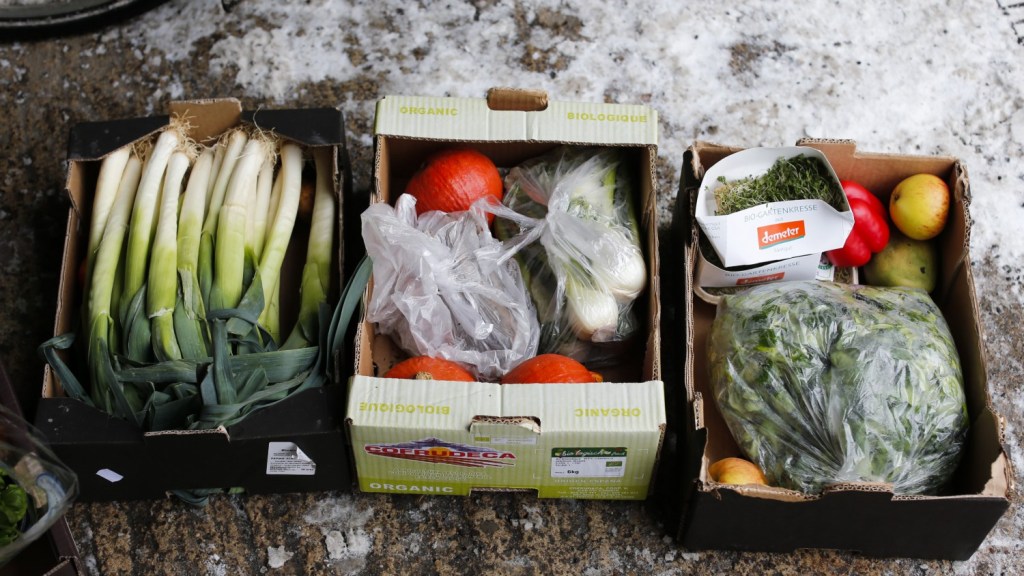 Vegetables pulled from the trash of an organic supermarket. REUTERS/Fabrizio Bensch
Food

There’s a bagel place two blocks north of my apartment. During the day, it serves hundreds of people. One of its points of pride is that its bagels are made fresh, daily. From what I understand, that’s kind of the thing with bagels: They have to be made fresh daily.

If I’m walking home late at night, after the grates are pulled over the storefront, I’ll kick the trash bags out front of this shop. Pretty much every time, I’ll find one that feels soft and bready beneath my toe.

This is the free bagel bag. As far as I know, it is my secret.

Though I’m happy for the free bagel or seven, most of these bagels will still be carted off to the dump in the morning. And across New York City, there are likely many free bagel bags going undiscovered.

Our country throws away 40 percent of its food, routing $165 billion of food to landfills each year. An individual American throws away an average of 20 pounds of food a month, according to a 2012 report by the Natural Resources Defense Council.

At the same time, in 2013, 49.1 million people lived in food-insecure households, according to USDA figures. At some point during 2014, one out of four Americans relied on some sort of federal government food assistance program. The number of Americans turning to these programs has increased since the 2008 financial crisis, yet, since the start of the recession, funds for these programs have repeatedly been cut, and congressional Republicans are pushing for further cuts this year.

All of that wasted food, meanwhile, creates a host of environmental problems, growing the size of landfills and contributing to climate change. Organic matter decomposing in dumps is the third largest source of methane emissions, a potent greenhouse gas, in the U.S.

Not all of the food we send to landfills is fit to be eaten — but a lot of it is. Grocery stores overstock to make their shelves look bountifully full. Industrial kitchens, like those found in universities and hospitals, cook too much to make sure they will have enough food for an unexpectedly large influx of diners. Much of this food would still make a fine dinner up until the moment it gets bagged and tossed in the dumpster.

So why are we so bad at getting this food to people who want to eat it?

There are a number of answers to that question, says Steve Dietz — none of which amount to terribly good excuses for our wasteful nation. It’s Dietz’s job to convince kitchens of various sorts — those at universities, hospitals, restaurants, airports — that it’s in their best interest to donate food. He heads up business development for the Food Donation Connection, a group that connects 8,000 locations in the U.S., Canada, U.K., and Ireland to around 9,000 nonprofit agencies that get food to people in need. “So I’ll go up to a CEO and say ‘We want you to save your surplus food and donate it, and we’ll come up with the process on how to do it, we’ll manage that process for you,’” Dietz explains. “‘We’ll find the agencies, link them, and basically we’ll run the program for you.’” By end of this year, the Food Donation Connection expects it will have rescued 500 million pounds of food.

Dietz says the most common reason kitchens don’t donate is because management is afraid of the risk involved. On one recent survey by the Food Waste Reduction Alliance, 67 percent of wholesalers and retailers in the United States listed liability — say, if someone gets sick from spoiled food, and decides to sue — as their biggest concern about donating.

But that 67 percent of people need not worry. In 1996, Bill Clinton signed the Bill Emerson Good Samaritan Food Donation Act, which protects food sellers and kitchens from any liability should they choose to donate excess food.

Donors are safe “unless there’s gross negligence, and gross negligence has been described to me by several people as someone has to willfully taint the food knowing it’s going to harm someone,” says Dietz. “To date, to anyone’s knowledge, no one has ever challenged that in court,” he says. “Nobody has ever sued anybody under that act.”

But potential donors still worry. “Just because I can’t win a lawsuit under the Good Samaritan Act doesn’t mean I can’t drag you through the mud and cost you a fortune,” Dietz explains.

Though liability is the big one, there are other concerns that also sometimes prevent people from donating. Some restaurants, for example, aren’t sure what to do with the food while waiting for the groups that give it to needy people to come pick it up. “We hear about the cost of, you know, ‘What are we going to put it into?’ and ‘Where are we going to leave it?’ — reserving space in the cooler for it,” says Emily Broad Leib, an assistant professor of law at Harvard who directs the university’s Food Law and Policy Clinic. “And then, if the food recovery organization isn’t the one picking it up, ‘How are we going to get it to the place where it needs to go?’”

While working with organizations seeking to donate food in Massachusetts, Broad Leib has also found that kitchens can face pushback from health inspectors when they consider setting up a donation program. “I think sometimes health departments get really nervous — they don’t know what the rules are, and they really scare companies,” she says. “When a company asks their health inspector, ‘Well, how can I do this?’ they get guidance back that is really onerous.”

Perhaps surprisingly, most people I spoke to agreed that retraining workers, or scheduling more workers, to get a food donation program up and running was not a major impediment for potential donors. According to Dietz, Darden restaurants, one group the Food Donation Connection works with, did a study that found that preparing food for donation took workers about 15 minutes a day, and that that cost could be covered completely by “reallocating labor,” without the need to hire new employees.

But while there are a host of concerns about donating food — the biggest of which, liability, is something of a nothingburger — there’s one big, good reason (at least, for some companies) to donate food: Many corporations are eligible for a tax credit if they donate food that would otherwise be wasted.

The challenge for Dietz’s Food Donation Connection and other groups that want to facilitate food donation is to overcome the burden of concerns about liability and spread the good news about the tax credit.

“So I go to a CEO and I say ‘We can save you $5 million next year on your income tax,’ we take a small percentage of that to fund us, and the agencies get all the food for free,” Dietz says. (The Food Donation Connection is for-profit, and makes its money from the corporations that it helps set up donation programs. It’s a model Dietz says better allows the organization to provide food, at no cost, to groups like soup kitchens, and to not compete with them for funding.)

Dietz ran through a hypothetical scenario of how the tax incentive could help a company that regularly throws out its food. Think about a bowl of spaghetti. It costs $10 on the menu. If it costs the restaurant $3 to make the dish, and then you take taxes into account, the restaurant might make about $4 in profit on that spaghetti — if you order it.

If you don’t, and the restaurant throws out its $3 of ingredients, it loses $2.05 — it’s not a complete $3 loss because the restaurant gets a small tax benefit just for buying the food in the first place.

But, if the restaurant donates those same ingredients — and receives the tax benefit for doing so — it may end up losing only about $0.85.

The problem is, not every business is certain to get the tax break.

For C corporations — a tax designation which includes many, but not all, American companies that deal with food — the tax break has been in place since 1976. But for years it didn’t apply to other types of corporations, including many small businesses and farmers.  The tax credit was temporarily expanded in 2005, but that expansion has been renewed only sporadically — often, like so many other tax credits, amid a frantic rush of tax extenders at the end of the year. Because of this uncertainty surrounding the tax credit, many people with food to give have remained reluctant to donate — fears about liability trump the potential benefit of an unreliable tax credit..

“People would rather do nothing than take the tiniest bit of risk,” says Broad Leib. “We don’t have great data on how much the tax incentive changes people’s minds, but we do have one data point: That, in 2005, when we expanded that tax incentive to go to all businesses instead of just C corporations, donations rose by 137 percent the following year.”

In the face of federal inaction, some states have set up their own tax incentives for certain groups excluded from the federal tax credit. But other states are taking a different tack: Instead of providing a tax incentive to donate food that might otherwise be wasted, they’re simply banning organic waste from landfills. It’s a method that could cut down on needless food waste even more than tax incentives. (I’ll take a closer look at these food waste bans in my next post.)

New York, in fact, is rolling out such a law. But it’s still getting up and running.

So, in the meantime, if you’re interested in acquiring some day-old bagels in bulk, let me know. I can hook you up.