The Singapore-based palm-oil business Musim Mas announced Thursday that it will make sure that the oil it purchases hasn’t been harvested in ways that cause deforestation.

Musim Mas handles about 18 percent of the world’s palm oil. It was the last of the big palm oil companies that hadn’t agreed to fight against land clearing and human rights abuses. The announcement comes one year after Wilmar International, the biggest player in the palm-oil game, agreed to take a stand on the issue. Since then, all the other major corporations have followed suit. Now 96 percent of palm oil production is covered by a no-deforestation policy. 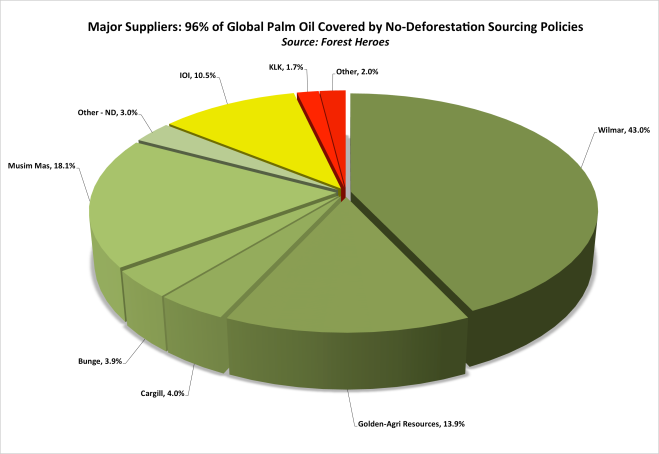 It has been — in short — a remarkable year for reform in the palm oil industry.

The development of oil palm plantations has caused the loss of critical orangutan habitat and led to massive underground fires — where thousands of years of accumulated carbon, in the form of jungle peat, is released into the atmosphere. It’s been a pretty grim situation. Now, this rolling catastrophe looks like it could soon grind to a halt. The NGOs campaigning for change will be monitoring the companies closely to see if they actually follow through on their commitments.

But this doesn’t mean that all of you who have been abstaining should go out and shotgun a gallon of palm oil. There’s no specific date when we’ll be able to say the problem is solved. “It’s a continuous improvement,” said Glenn Hurowitz, chair of Forest Heroes, which played a major part in securing these commitments. It takes a lot of hard work to push the policy all the way down to the field, to make sure it is implemented by every farmer whose oil ends up going to these companies.

Greenpeace, the Rainforest Action Network, and The Forest Trust led efforts to convince Musim Mas to make this latest commitment. In a press release, Musim Mas announced its new sustainability policy, which, it said, “re-affirms its commitment to bring benefits to the community, respect the rights of smallholders to develop or conserve their land, while maintaining a strict guideline of No Deforestation, No Peatland Development and No Exploitation.”

I recently sat down with Hurowitz to talk about what this palm oil revolution means in practice and how it came about. Look for that next week.

Correction: The headline of this story originally referred to palm-oil producers, but the businesses in this story are mostly palm-oil buyers. The producers, that is, farmers, are generally much smaller, which is why campaigners have focused on the next link in the supply chain — the commitments of the large buyers creates the incentive for producers to change their practices. The author regrets the error and has been sentenced to a day of greasing palms.

E.O. Wilson talks science and the meaning of life