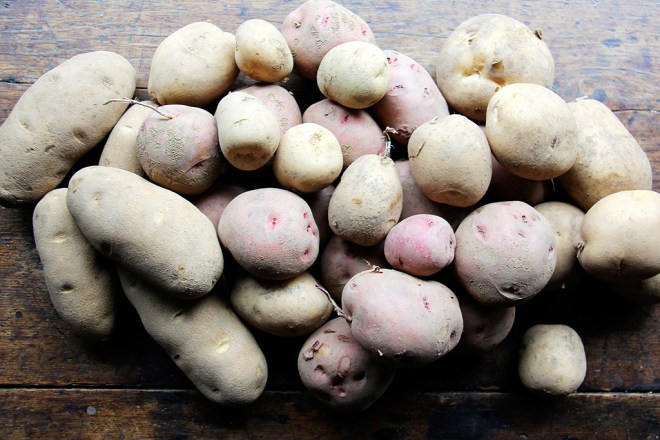 It turns out that peeking under an eight-inch wide potato pancake isn’t so easy. And flipping it is another story altogether.

Two too many burnt-centered, mangled rösti had me dreaming about see-through skillets, ones with fog-free technology to boot.

Determined to get it right — a photo of a beautifully golden tangle of potatoes in the I Love New York cookbook a constant inspiration — I decided to change my strategy. I stopped wishing for that see-through pan and mustered a little patience, faith, and finesse. 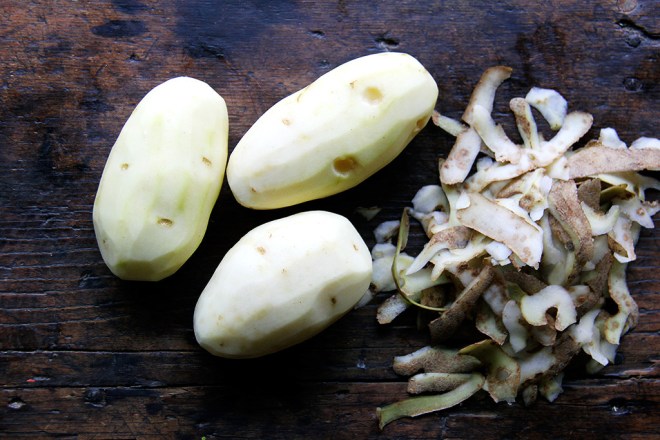 And by some miracle, it worked. It turns out that these virtues are the keys to rösti-making success:

Patience: Keeping the skillet at a medium-low temperature will allow for even browning and a crisp edge. As long as you can hear the oil gently sizzling, you’re on the right track. 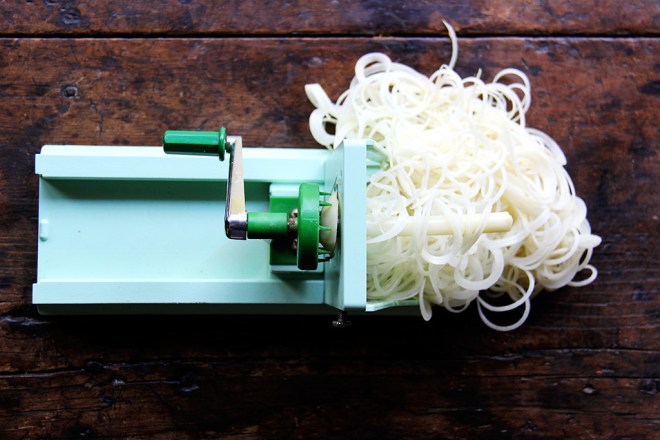 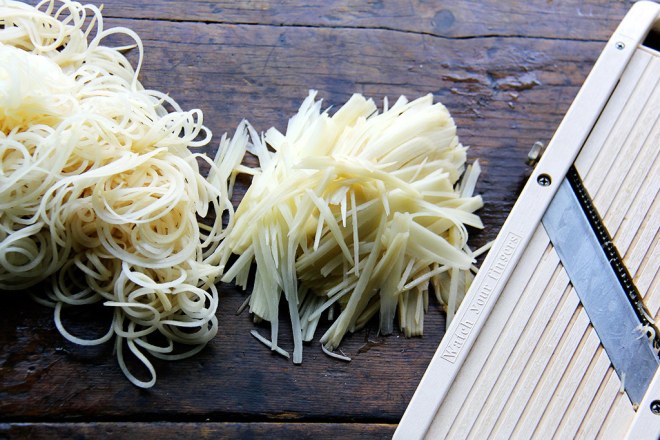 Faith: After 15 minutes of cooking at a low temperature in a generous amount of oil (requisite for rösti making), the pancake will release from the skillet without leaving more than a strand or two behind. Really, it will.

Finesse: Flipping the pancake with a spatula proved as difficult as attempting to flip it fried-egg style with a nimble jerk of the wrist. The solution? Place a plate just smaller in diameter than your sauté pan over the potatoes; using one hand to secure the plate to the potatoes, flip the pan with your other hand so the pancake turns out onto the plate; slide the pancake back into the pan. 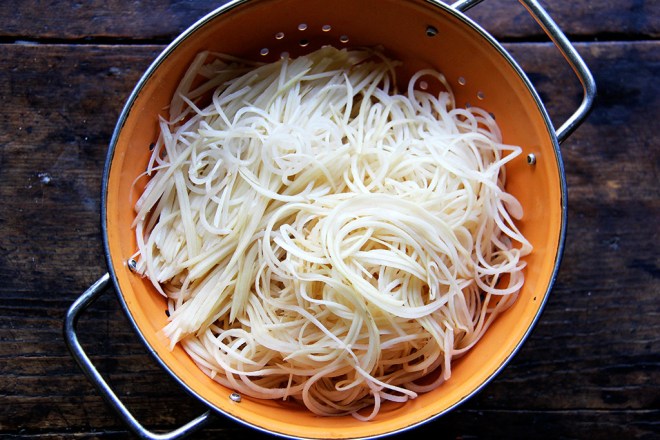 Rösti, the Swiss version of a giant potato latke, is traditionally served at breakfast. Inspired by the I Love New York cookbook, which serves their rösti with maple-smoked sturgeon, I’ve used smoked salmon here. A dollop of crème fraîche, a squeeze of lemon, and a scattering of capers and onions complete the meal — a simple supper, an elaborate brunch.

The season of gratins and mashes and soups is upon us. My only hope is that this season will be one of röstis, too. 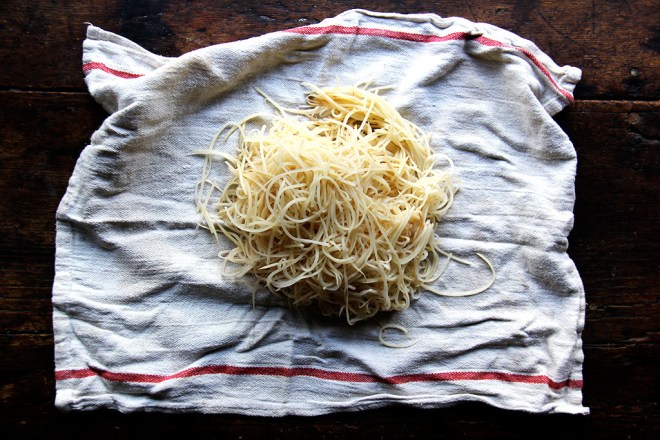 To store your potatoes: 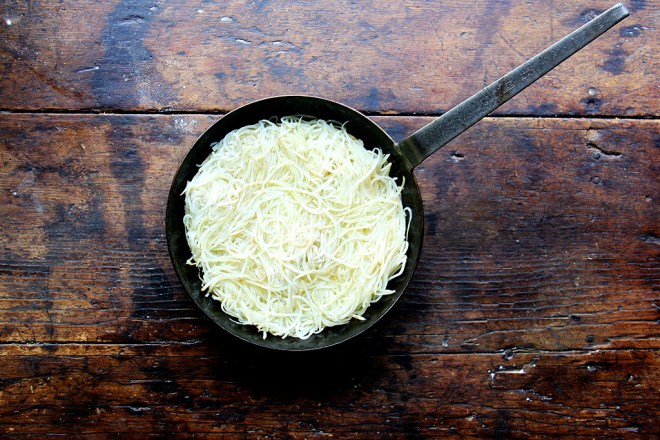 To prep your potatoes:

Potatoes do not have to be peeled before cooking, but if you notice any green in the skin or flesh, cut off that portion and discard. Eyes can be left alone, but if the eyes have started to sprout, simply cut off the sprouts and discard. Potatoes can be dirty, so if you are not peeling, run them under cold water and scrub them with a vegetable brush to remove any dirt. If you are peeling them, and if the potatoes will be sitting for any period of time before cooking, place them in cold water, which will prevent browning. Be sure to dry potatoes well before roasting or frying. 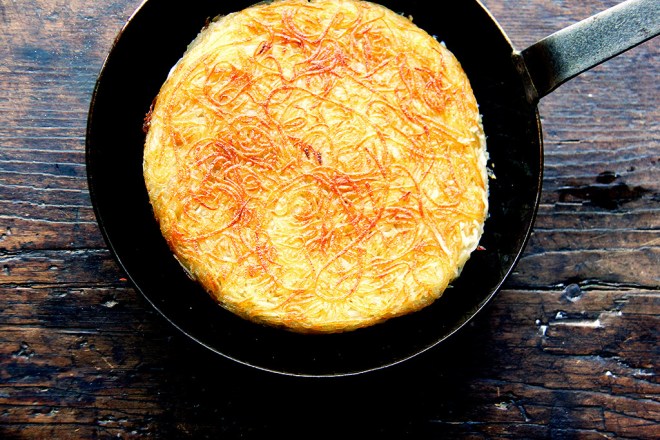 To cook your potatoes:

Where to begin? There are countless ways to cook potatoes, but this time of year, especially if you are buying potatoes at farmers markets, receiving them in your CSA, or harvesting your own, simple preparations are best: Dice or thinly slice; toss with olive oil, salt, and pepper; and roast until golden. Or boil them until tender, mash with lots of olive oil, salt, and chives — this is particularly good with small, red-skinned potatoes (no need to peel).

Of course, because potatoes vary in starch content, certain potatoes are better suited for certain preparations. Russets, high in starch, are prized for baking and frying, and are a good choice for making slap fries or elegant stacks of potato dominoes (though I’ve made these with Keuka Golds, and they couldn’t have been more delicious.) Russets are also great for hash browns, rösti, and mashes, though Yukon Golds make great mashed potatoes as well. 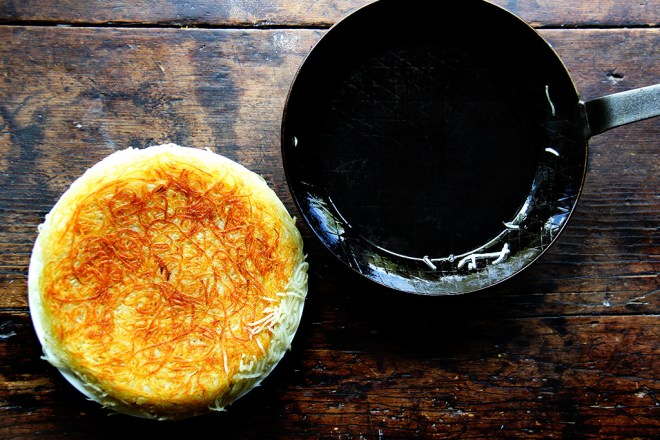 Fingerlings can be simply roasted (left whole if small or halved if larger), but when treated a little differently — boiled with salt in a wide shallow pan or boiled, smashed, and then fried — make irresistible appetizers.

New potatoes need little more than a browning in butter and a showering of parsley. 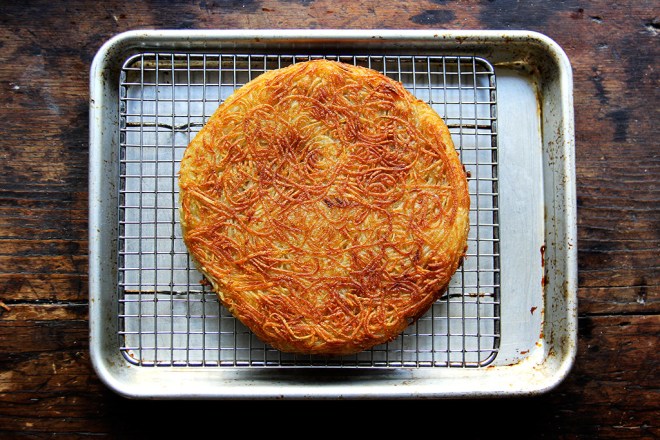 And although certain potatoes fare better with certain preparations, a variety of potatoes can be used for countless preparations: salad, pizza, soup, stew, pierogi, and gnocchi. 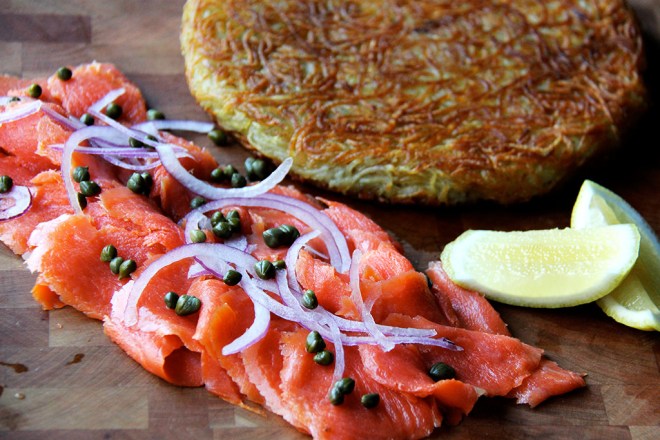