This Airstream farm is so ... Burning Man 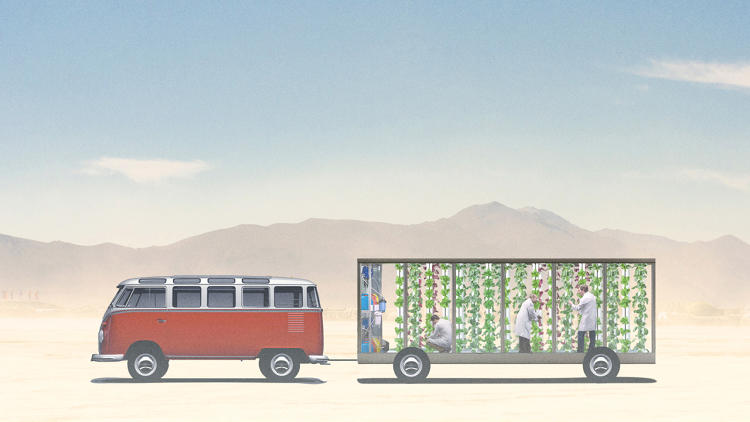 Isabel
baby, you can drive my chard

This Airstream farm is so … Burning Man

Ah, Burning Man! The annual gathering of hula-hoop enthusiasts and tech billionaires might welcome a new compatriot this year, and her name is Isabel.

Not to be mistaken with the 2003 hurricane that killed dozens of people, this Isabel would be a vertical farm on four wheels — otherwise known as an Airstream with some plants in it. If the makers meet their IndieGoGo goal, Isabel will be retrofitted with clear panels so you can see inside and she will house crops like tomatoes, kale, and cucumber — as well as a DJ booth, because nothing makes veggies grow like dubstep. Naturally, Isabel would premiere at Black Rock City next month, hopefully parked between the Carny Corral and Mark Zuckerberg.

Ryan Hooks, one of Isabel’s creators, got interested in vertical farming after moving from New York to San Francisco and seeing the consequences of the California drought. He sees Isabel as educational:

People can come see it, get free salad, and they can ask us any questions. We can tell them this uses 95% less water than conventional farming, it’s two times faster, it doesn’t use pesticides. The Internet of Food is here, are you ready?

As good as pesticide-free van kale sounds, I’m not sure that I actually am ready for the Internet of Food. Isabel may not be either: Her appearance at Burning Man is contingent on the creators’ $45,000 IndieGoGo campaign and not breaking down on the way from San Francisco to Nevada, thereby forcing her entrepreneurial creators to abandon their heirloom trailer tomatoes and resort to eating each other. But if they do make it and you need a break from tanning your balls in the Nevada sun, stop by! Maybe they’ll have some aloe along with the cukes.