Disclosure: Lori Rotenberk was a guest of New Holland along with nine other American journalists who visited the T6, the tractor featured in this story. New Holland paid for her flight and lodging.

Little do college students know, but their late-night scientific observation of a burst of methane flatulence kissed by the flame of a match may be the innovation that saves us all from climate change catastrophe. That conversion of food to gas could truly curb greenhouse gas emissions.

Around the world, farmers are installing anaerobic digesters. These digesters ferment manure and plants into biomethane. Many farmers use the fuel for heating homes and buildings, selling their excess to local grids. Soon, however, many European farmers hope to fuel their machinery via anaerobic digestion, making themselves greener and fuel-independent.

A short distance outside of Turin, Italy, in the small town of Venaria Reale, rolls a beauty of a tractor fueled from a hefty mix of chicken shit, bovine slurry from local farmers, and corn and triticale silage from the 1,100-acre farm known as La Bellotta. Luca Remmert, who owns the farm, keeps 9,000 hens for organic eggs and grows corn, wheat, and cereal grains. In an effort to save his farm, which was not making income enough from crops, he installed a digester, selling excess methane to the local grid. He also uses the liquid byproduct in his fields, saving more than $300,000 per year on fertilizer.

His farm is the testing ground for the T6, a second-generation prototype and the world’s first methane-fueled tractor, designed by New Holland Agriculture. Fragrant mounds of Remmert’s mixture for methane minestrone serve as the backdrop to the sky-blue tractor. It is as sharply designed as a bespoke Italian suit, and it makes Remmert’s farm more sustainable. Jarrod Angstadt, New Holland’s manager for growth initiatives, says the tractor, expected to roll out internationally in the next five years, produces 80 percent less CO2 pollution than one running on diesel. By that time, Remmert hopes to have all eight of his tractors running on methane made on the farm.

The T6 was introduced to the world at this year’s World’s Fair, Expo Milano, which has the theme “Feeding the Planet, Energy for Life.” Designed for a more environmentally-aware generation of farmers, it features all the toys that come with modern tractors: an expansive bubble-windowed cab, intricate computer systems with touch screens, and great sound systems. 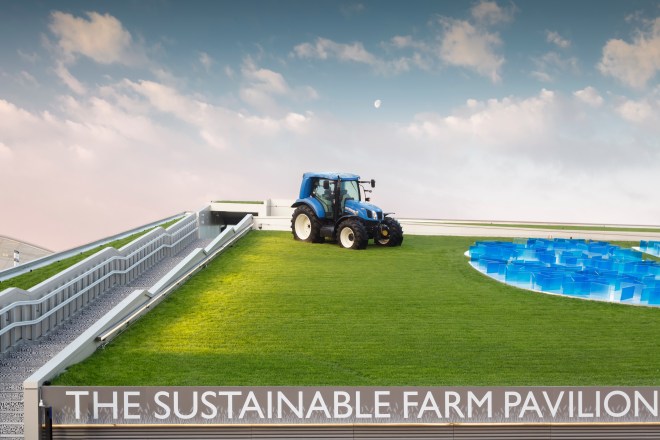 The T6 at Expo Milano.New Holland

While the cost of installing an anaerobic digester can be steep — initial costs for a large farm start around $6 million — they pay for themselves, says Remmert. The U.S. currently lacks the infrastructure it would need for this sort of thing, such as fueling stations for biogas, but Europe is light-years ahead. The E.U. has a government mandate requiring a 20 percent reduction in greenhouse gases by 2020. Germany, for instance, chose to subsidize biogas rather than ethanol.

One of the people hoping the U.S. will catch Europe’s poop fever is Dan Andersen. Andersen, who goes by the Twitter handle @DrManure, is an agricultural and biosystems engineer at Iowa State University where he teaches manure management. Poop, he says, has been given a bad name (many, in fact) and needs to be elevated.

And there’s no reason it couldn’t be elevated: In making craft beer, a (probably young and bearded) brewer is just using microorganisms to metabolize the sugars in grain, producing alcohol and carbon dioxide. Making biomethane is not so different than fermenting a batch of say, Dogfish Head’s Indian Brown Ale.

The process, Andersen points out, turns a negative into a positive: Animal waste, if left to fester, pollutes waterways and sends methane into the atmosphere. By turning it into an energy source (via digestion or other means such as gasification), it’s recycled. The use of animal waste as fuel goes back thousands of years. In some places, the poor still use dung as a cooking and heating fuel. There was even a movement underfoot in the U.S. in the 1970s to use dung as fuel when the price of oil skyrocketed.

Andersen says that the U.S. should make better use of the estimated 360 million tons of farm animal waste kerplunked yearly. There are an estimated 250 anaerobic digesters in the U.S., he says, most being on dairy farms in California, New York, North Carolina, and Wisconsin. Farmers take the power they generate to heat homes and barns, or they sell it to utility companies. Why dairy farms? Because dairy cows yield the most poop.

When I asked about the varying waste production of farm animals, Andersen produced this measurement chart and added this chicken nugget as a bonus: “Most animals poo and pee, but chickens do both at the same time.”

Poo matters, Andersen says. As fuel, it’s biodegradable and costs 30 percent less than diesel. Methane from an anaerobic digester burns clean, and although it emits some CO2 it’s not adding new and additional CO2 into the atmosphere. Rather, it’s recycling it as the plants and food the animals eat are converted from gas to solid to gas again.

Moreover, the liquid byproduct from the digester can be reapplied to fields, and this the organic matter helps build carbon in the soil. The fermentation process also kills off bad pathogens.

“The further adoption of anaerobic digestion systems on livestock farms can be a win-win for the environment and rural communities, reducing greenhouse gas emissions, helping protect local air and water quality, and providing a local, reliable source of energy and fuel,” Gunning says.

Biogas recovery in the U.S. is already used in food processing and wastewater treatment. But it could be used further. Reducing methane is a key component of the president’s Climate Action Plan.

Meanwhile, Andersen, who adds that he’s often referred to as Dr. Manure by students and faculty, begs that we rethink crap. “Good use of it allows us to be the ultimate recycler,” Andersen says. “It can become energy or fertilizer. Why pooh-pooh it when we can make it useful?”