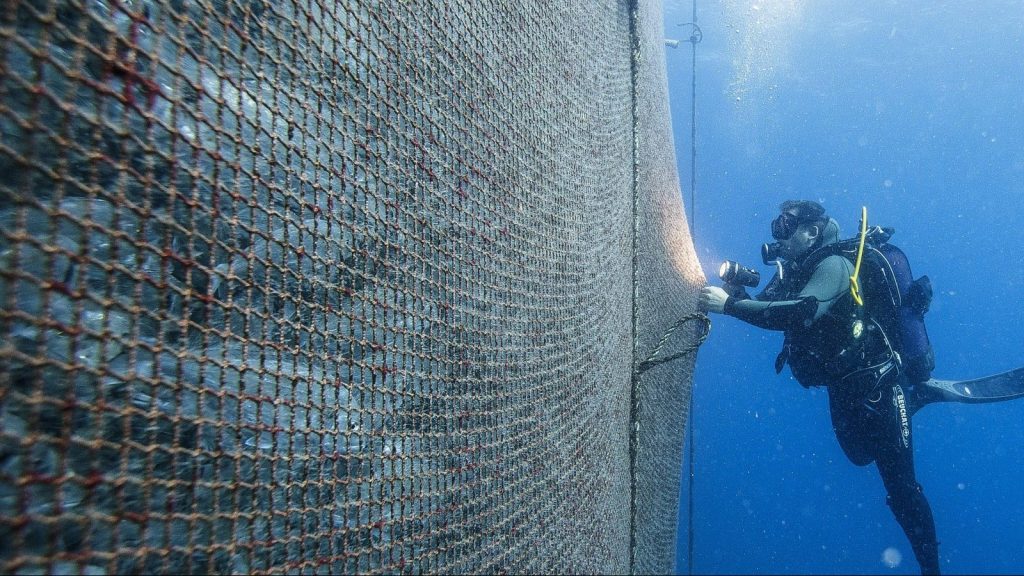 As the coronavirus pandemic ravages the meatpacking sector, the Trump administration last week made a major announcement about another essential food industry: seafood. With a late-afternoon executive order, the administration laid out a pathway for the approval of ocean aquaculture in federal waters, a controversial departure from existing policy that could reshape the country’s seafood production.

The order sets in motion a process for approving finfish aquaculture projects in federal waters, establishes authority over those projects at the National Oceanic and Atmospheric Administration (NOAA), and aims to deregulate and expand seafood production.

“This [order] is slashing through what it calls barriers, but those barriers are there to ensure public health, safety, and environmental safeguards,” says Hallie Templeton, senior oceans campaigner at Friends of the Earth. “They’re placing corporate interests over protecting people who actually need it right now.”

Currently, a bulk of U.S. aquaculture involves growing bivalves, like oysters and mollusks, close to the shoreline. The prospect of opening federal waters to farming finfish — like tilapia, perch, or bass — has always been polarizing. Some experts say that the method of raising fish is akin to a floating industrial farm, with the accompanying risks to the environment, wildlife, and smaller producers.

The executive order could expose the U.S. to those risks, says Rosanna Marie Neil, policy counsel for the Northwest Atlantic Marine Alliance. “[The order’s provisions] will pollute the ocean and affect wild fish, the quality of the fish, and the health of ecosystems,” Neil says. “The product that independent fishermen offer, which is a premium, healthy, wild-caught fish, may not be the same if we open the door to offshore aquaculture. It will create competition that could put people out of business.”

But the fishing industry has long argued that the country needs more aquaculture to enhance food security and decrease our reliance on seafood imports. Currently, about 90 percent of our seafood is imported, though some say that figure is misleading because a portion of our domestic catch is shipped overseas for processing and re-imported.

“We simply cannot meet the rising global demand for healthful animal protein without farming fish,” said Sean O’Scannlain, a board member of Stronger America Through Seafood, an industry coalition, in a statement on the executive order. “Today’s [order] recognizes a need and an innovative, thoughtful program to meet that need using American workers, American technology, and American resources.”

The order settles a number of debates about who should regulate the nation’s fisheries and how. It establishes NOAA as the agency to review and authorize aquaculture projects in the country’s exclusive economic zone, defined by the Magnuson-Stevens Act — the federal “fish bill” — as the ocean waters spanning from three to 200 miles off of the U.S. coastline. It also requires other agencies to cooperate with NOAA’s review and authorization process in keeping with the 2017 One Federal Decision rule, which consolidates environmental review of such projects under one agency.

NOAA has sought authority over aquaculture projects for years, even taking the issue to court. But other agencies have also been involved in aquaculture review; for instance, the Environmental Protection Agency is currently reviewing a proposed finfish aquaculture operation off the coast of Florida. And some members of Congress have proposed that that body should have oversight of aquaculture given its potential environmental risks. The executive order’s move to grant NOAA sole oversight of aquaculture permitting “removes checks and balances that you get from having different agencies weigh in on these processes,” says Neil.

NOAA responded to a request for comment with a statement the agency released May 7 in response to the order. In the statement, Chris Oliver, NOAA’s fisheries assistant administrator, said the order “creates an exciting new opportunity to address long-term challenges to expanding the domestic seafood sector.”

The order also gives the country’s eight regional fishery authorities, which set fishing seasons, quotas, and other management plans, six months to generate a list of “recommended actions to reduce burdens on domestic fishing.” This deregulatory action is “deeply concerning” and could endanger the progress that has been made to restock depleted fisheries over the past two decades, says Dr. Miriam Goldstein, director of ocean policy, at the Center for American Progress.

“In the era of climate change and shifting stocks, we need to keep the laws that safeguard wild fish stocks and marine ecosystems in place, not weaken them,” she says.

Environmental advocates are also concerned about the ambitious timeline laid out by the executive order, especially as the country is overwhelmed by managing the coronavirus pandemic. The order calls on the Army Corps of Engineers to draft a nationwide permit for ocean aquaculture within 90 days, which may result in the issue “[flying] under the radar, and the public will be robbed of its opportunity to engage,” says Templeton.

And the order requires agencies to complete environmental reviews of aquaculture projects within two years, which is much faster than review processes typically take, Templeton says. “There will not be a perfect environmental impact statement that can be produced in that timeline,” she says.

The fishing industry has been struggling to stay afloat during the coronavirus pandemic and has made multiple appeals for federal relief. Last week, the first of that relief came in the form of $300 million that will be allocated to the industry as part of the Coronavirus Aid, Relief, and Economic Security (CARES) Act. The largest allocations, $50 million each, will go to Alaska and Washington State.

“The fishing and seafood industries have been hit hard by the coronavirus pandemic,” said Rep. Jared Huffman of California, who has been advocating for federal relief to the fishing industry and who leads the House Natural Resources Subcommittee on Water, Oceans, and Wildlife, in a statement on the allocated funds. “This money needs to quickly be delivered to all those whose businesses and jobs have been disrupted.”

“If we want to strengthen the domestic seafood system then we should be focused on replenishing fish stocks here and making sure our fisheries are healthy and productive,” she says. “For [the administration] to take advantage of this moment and use it to deregulate the fishing industry is really appalling.”

This story was produced by the Food & Environment Reporting Network, a non-profit news organization.