What happened to America's black farmers? 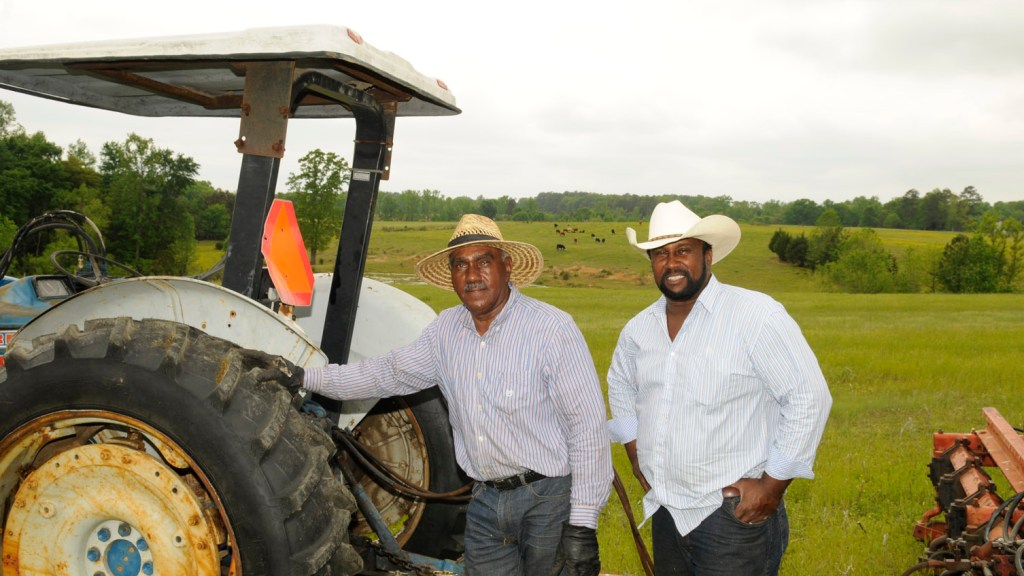 John Boyd (right) and his father on their farm in Virginia. Courtesy of John Boyd
Farm Size Matters

What happened to America’s black farmers?

John Boyd remembers watching a USDA official toss his loan application in the trash. It was the late ’80s, and Boyd, a fourth-generation black farmer from Baskerville, Va., was counting on a $5,000 loan to keep his family farm in business. Boyd was told to come back the next week to re-file his paperwork, but a white farmer walked out of the office with a $157,000 check.

Boyd wasn’t alone. By 1982, African-American farmers received just 1 percent of farm-ownership loans. In fiscal year 1980, the USDA allotted 398 farm-ownership loans to black farmers, totaling $15.9 million. By fiscal year 1983, the agency administered 109 loans, valued at $4.3 million. Such stark data, as well as a growing body of testimonies from African-American farmers like Boyd, raised the question of discriminatory practices by the USDA — and the role those practices played in removing black farmers from the American landscape. So Boyd and others took action. In 1995 Boyd founded the National Black Farmers Association, a nonprofit support group that challenged the USDA’s track record of denying black farmers loans. The following year he marched to the White House with a group of 60 farmers.

Boyd’s work helped spark a landmark legal case in 1997. In the class-action lawsuit Pigford v. Glickman, 400 black farmers alleged that the United States Department of Agriculture had denied them loans based on racial discrimination. The decision eventually awarded thousands of black farmers payments up to $50,000 for discrimination claims. In 2010, President Obama announced an additional $1.25 billion settlement, known as Pigford II, to fund any additional unfiled claims. Native American, female, and Latino farmers were also eventually awarded similar settlements, too. A New York Times investigation into the settlement later raised suspicions of fraud by some claimants, which led to a fiery media dialogue about how to prove discrimination.

I spoke with Boyd about Pigford, land loss, and the future of black farming in America. Below is an edited and condensed version of our conversation.

Q. It’s been about five years since the last Pigford settlement. Is the fight over yet, or was the lawsuit just a step in the right direction?

A. We have so many hurdles to cross before we [are on] a level playing field. We’re just not there yet, even with a black president — and the president was doing his part. People ask me all the time, ‘Do you think the president has done enough?’ He signed that bill for a billion dollars and he put his name on there. George Bush didn’t do it. I’ve spoken with every president since Jimmy Carter about black farmers, can you believe that?

A. It admitted that a lot of these things transpired. It doesn’t fix all those problems, but it said, hey, here’s what happened to America’s black farmers when they tried to apply for credit at the United States Department of Agriculture. Their applications were torn up and put in the trash can, they were spit on, they were humiliated, they were spoken [down to] by these racist agents that were very pervasive in the South. For me, the 30-year struggle took too long; it took too long to bring justice. So when the president signed that bill on Dec. 8, 2010, it was [a] huge weight lifted off my shoulders. But for many of the farmers who started the campaign with me, all of these great advocates didn’t get to live to see that day. So that’s very painful for me. We marched year after year and I lobbied Congress year after year, and I went home and didn’t win year after year.

Q. What are the unique circumstances of the black farmer today?

Although we had two historic settlements, many of the challenges that stemmed that fight are still in place. There were very few people, actually just a handful, that were terminated or penalized for the act of discriminating against black farmers. So we hear a host of these things and these issues at our annual convention. [The settlement] was a huge victory for not only black farmers but for black people, because it showed that a ragtag group of people could take on the government and win.

Q. Is racism still an issue?

A. Many of the places where I’m selling grain, these people may look at me and may not know I’m John Boyd, you know what I mean? I’m coming in as a farmer and yes, I do see the different ways they treat me as an African-American farmer and the way they treat the white farmer. There’s a clear difference the way they treat us when we come in. It’s a race thing and I don’t know how to fix that; that may not happen in my lifetime. [Racism] is real. We have a real race problem in this country and there’s no better issue to look at on race than the black farmer, if [Americans] really want to see what happens in this country. There are all sorts of uphill battles we had to overcome and by the grace of God, a handful of us are still out here farming.

What has happened is that a lot of family farms have been left to the next generation, and they’re really not set up to continue farming. That has created a huge challenge for black people in this country as far as being agriculturalists and maintaining and contributing to America’s fabric, which is why black people were brought into this country in the first place. We were brought to this country to work the land and we’ve done it for hundreds of years for scot-free. Here we are hundreds of years later, barely holding on here.

Q. Why is land ownership particularly important for black farmers?

A. If we don’t have land as a group of people, we don’t have any power. We don’t value land the way white America values land, and I’ve been fighting to change that. You know, when daddy dies, don’t be so quick to sell daddy’s farm. We moved up [away from the] South, we moved away from the farm. Many generations, my generation and the generation before that, said, “I want to get as far away from this farm and this mule as I can, I never want to come back here again because I’ve had such a bad experience.” And that should never be the case. When we lose our land, we’re also losing a part of our history. We’re losing a part of our identity in that community.

Q. What can people do to regain lost farmland?

A. One thing people can do is to start growing their own food in their backyard. That is a huge step in the right direction of reconnecting their children with the land and food and showing their children where their food actually comes from. These are all things that can be done on a small scale that would improve the lives of black Americans here in the United States.

We need people to become concerned that God doesn’t make any more land. They make a new Cadillac and a new Mercedes-Benz every day, but the actual land, once it gets away from you and your family loses that land, it’s very difficult to go back and buy it from a white farmer because they’re not going to sell it back to you. We can’t continue to give our land away for pennies on the dollar and move to suburbs and condominiums. That’s a real problem.

Q. Why should young black farmers care about farming?

A. Given the history we’ve had, that a lot of the older black farmers don’t want anything to do with the government is rightfully and understandably so. But the next generation that’s coming along, we’ve worked so hard to put all these programs in place. I want to see the next generation go in and start to apply and take part in all these federal programs that white farmers have really been taking advantage of. I’m really asking our people to take a second look at farming and agribusiness. As my grandfather said, “I can’t leave my PhD to my children, but I can leave my raggedy farm to them.”