When they're not busy weaving leaves, these ants make great insecticides 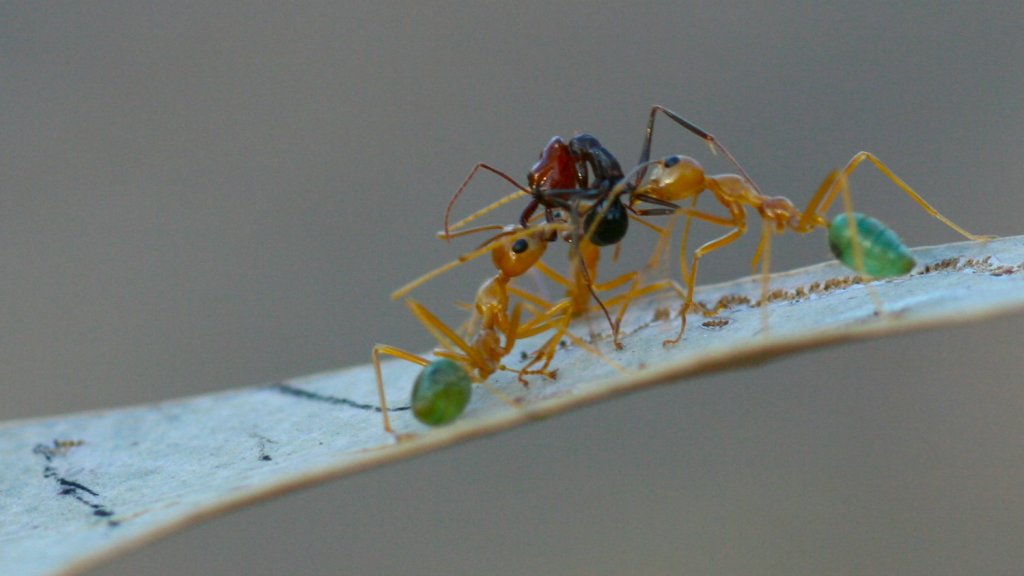 Benjamin Jakabek
it's not a bug, it's a feature

Humans have spent millions of dollars to develop the next best pesticide system, building smart technology like sensors, drones, and autonomous robots to more accurately spray pesticides on crops. But, as it turns out, we may have missed something important in our quest to find the latest, greatest, most expensive technology to solve our problems.

According to new review of research by Joachim Offenberg a biologist at Aarhus University, ants can control pests as efficiently, and much more cheaply, than pesticides. The review of more than 70 studies was published in British Ecological Society’s Journal of Applied Ecology. It showed that for many crops — from cocoa to palm oil to citrus to cedar — ants could be used in a wide variety of climates and locations in place of pesticides.

The review may be new, but the technique isn’t. According to Science, the Chinese started using the method 1,700 years ago, when farmers released ants in citrus groves. Farmers in Africa, Latin America, and Australia regularly use ants to control pests. But farmers in more industrialized countries just never caught on, primarily because of the invention of synthetic insecticides.

“It has just been forgotten,” said David Hughes, an ecologist and co-creator of PlantVillage, a mobile resource for plant-related information.

Most of the studies in the review looked at weaver ants, which live in tree canopies in the tropics and weave ball-shaped nests from leaves. Farmers don’t need to do much to get them going — just collect some nests, hang them among the tree crops, and feed the ants a sugary solution while they weave new nests in the field. Be sure to connect each colony to a tree in the field via a string so the ants can get around, and voilà: pesticide. The ants will diligently wipe out other insects that try to feed on the trees. From there, all they need is water during the dry season, pruned trees to avoid ant fights, and obviously, limited use of pesticides.

But there’s no such thing as a silver bullet in farming. We don’t know yet how ant-as-pest-control would work in places where it hasn’t been used before. Ants could wipe out populations of beneficial insects, push pests to nearby farms, or ignore all pests and focus on sugary secretions from insects like aphids. And if farmers are counting on species used in other parts of the world, we’d have to remember that introducing new species is always a risky proposition.

So we don’t know yet how all this could play on, say, a vineyard in California. But the evidence points to the fact that in many places, the pluses could outweigh the minuses.

Weaver ants are ideal for agriculture because of these unique characteristics, said James Traniello, a biology professor at Boston University. They are especially suited to crops like cashew and mango. One study in Australia showed the yield for cashews was 49 percent higher and the nut quality was better, leading to a 71 percent higher net income for farmers.

Farmers spend about $4 billion on pesticides annually, according to the EPA, and its latest research from 2007 shows that 5.2 billion pounds of pesticides are used globally every year. Millions of hard working ants could potentially make a big dent in that.

“There’s a renaissance use of weaver ants as pest controllers and proteins, which are positive indicators, but how broad it will be is difficult to say,” Traniello said.

At the latest count, about 15,000 ant species exist in the world, says Traniello. Plenty of those could offer their services to replace chemicals if farmers use proper protocol for Integrated Pest Management (IPM), a series of guidelines to sustainably manage pests.

Offenberg, head researcher of the review, said in a press release that ground ants could be used for sugarcane and maize, and European wood ants might control moths in apple orchards. Ants are powerful little things, too. Because they work in mass groups, they cooperate to get rid of large pests like caterpillars, and to combat disease.

“Most food in the world [is] grown on small farms and most of those have higher productivity than big scale farms,” Hughes said. “If you can show farmers how implement this and spread that knowledge through their communities then potentially, there are no barriers.”

But perhaps the biggest barrier is that most people still view ants as pests. Take the fire ant, Hughes said. We exterminate them even though they are good bio-controllers, because we don’t want them around. So for ants to be useful, farmers would have to find species that occur naturally and shift the environment to help those species become dominant. If it’s done within the IPM framework, he added, the little guys could have a large effect indeed.