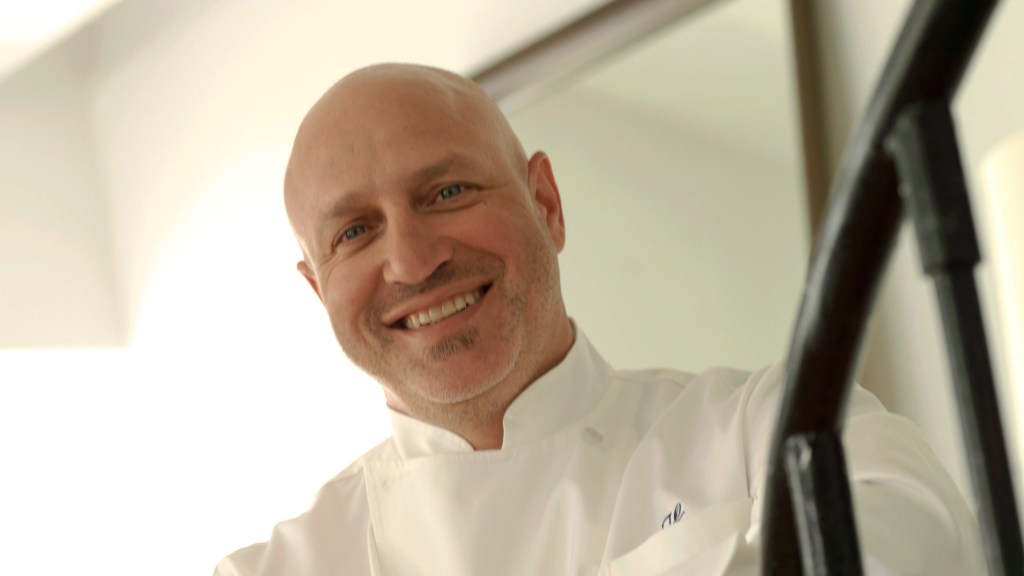 You might know Tom Colicchio as a Top Chef, but he also seems to be in the running for Top Food Activist.

In addition to being head judge of the Bravo hit reality TV show and chef/owner of Craft Restaurants, Colicchio is an influential advocate for ending hunger and improving the safety and environmental practices of the food system. He is a board member of the nonprofit Food Policy Action, and he recently served as executive producer of A Place at the Table, a film about food insecurity in America directed by his wife, Lori Silverbush.

Colicchio is concerned that different segments of the food movement aren’t coming together to support each other. In fact, he wonders if there’s really a food movement at all.

Among other issues, he’s worried about systematic overuse of antibiotics in the raising of animals, which has been linked to a rise drug-resistant superbugs.

We spoke last week, the day after the U.S. House passed its version of the farm bill.

A. Most chefs feel that access to healthy, safe, and affordable food is a right. I was always happy to do my part raising money for hunger organizations, but when my wife decided to make a film about hunger in the U.S., that got me focused on the political side of why people are hungry.

Q. And antibiotic overuse in agriculture?

A. I care deeply about the way food is produced, and the effect it has on the environment and on people. So I was aware of the problem, but about two years ago I had surgery on my neck and I spent a week in the hospital with a staph infection. Then for a month and a half I was on an IV antibiotic drip, and that made me focus even more on it.

If you care about local food and how your product is being raised, you realize animals don’t need antibiotics if they’re raised right. Unless they get sick, obviously, but not prophylactically. When I understood the issue more, I started to voice my opinion about it more. Around that time I was on Morning Joe, and Joe Scarborough asked me what I thought was the biggest concern in the food industry right now, and I said “antibiotics,” that the majority of antibiotic drugs being used in this country are going into animals, and it’s creating superbugs that we can’t fight.

I care about issues like this and GMOs, hunger, and farmworkers’ welfare partly as a chef but also as a parent. If I have an outsized voice because I’m on TV, I want to use it for good, for things I care about.

Q. What evidence do you like to point to when sharing the scope of the problem with your peers?

A. I’m not a scientist or nutritionist, but I rely on sources I trust, and I’ll typically read both sides of the argument and then form an opinion. On the GMO issue, I’m not going to say they cause health problems, because I don’t see empirical evidence of that, but I still want them labeled. I just want to know what’s in our food. I believe we have that right. No one’s asking for a skull and crossbones logo on packages, or a surgeon general’s warning like with cigarettes, but if there’s GMO ingredients, the label should say so.

Q. I read that your restaurants are 95 percent antibiotic-free in terms of the products they buy. What can other restaurateurs do similarly to move the dial, when the cost of antibiotic-free is so high relative to conventional?

A. We’re now at 99 to 100 percent antibiotic-free at Craft, Colicchio and Sons, Craft Bar, and Heritage Steak.

In general, the more chefs and consumers buy antibiotic-free, the price should come down. And I’d love to see tax breaks for those farming without antibiotics. That could bring the price down, and encourage others to get into it, too.

But I also tell chefs that if there’s an outbreak and people are leery of going to restaurants, your business is going to suffer. We print on our menu that all our meats are antibiotic-free, and I think people care about that. We also train our staff to explain why it’s important if customers are curious to know more.

Q. Last year, you said on a radio program that you’re afraid it’s going to take a major outbreak of food-borne illness to get any real traction. Do you still believe that?

A. Yes, I’m afraid we’re going to have a bacterial epidemic that’s going to affect a large part of our population unless we get this under control. In general people don’t care as long as food is cheap. The problem is that we’re not seeing the real cost of food: the tax dollars that go into subsidizing cheap food, the health care costs of E. coli outbreaks. Unless people are directly affected, it goes in one ear and out the other.

Q. Have you been to D.C. lately to lobby or testify about food issues?

A. Last Monday, on the farm bill. Didn’t get very far.

Q. What passed is a real mixed bag.

A. Yeah, a mixed bag for sure. What bugs me about it is that although there are wins in there for things like farmers’ markets and Wholesome Wave’s double bucks program, the big winner is insurance companies. The government will be paying them huge amounts of money to write [crop] insurance policies. The idea that we’ve switched from subsidies to crop insurance is disingenuous. If it’s guaranteeing income, it’s still a direct-payment subsidy, they’ve just changed the method. Big Ag is also a big winner.

Q. What’s your take on the recent FDA rule change calling for the voluntary phaseout of growth-promoting antibiotics?

A. It’s a cop-out and doesn’t go nearly far enough.

Q. When you go out for a bite, are there kinds of foods you avoid given their relative safety statistics?

A. I go to restaurants that share my values: buying local when possible, buying organic when possible. I don’t walk around fearful of food at all, but I will stay away from chicken unless I know it’s been raised right by a reliable source. I don’t want something stuffed in a cage and mass produced.

Q. What is the food movement, to you?

A. I question that there’s actually a movement. I know I’ll take flak for this, but the problem I have with it is that it’s not organized, it’s a bunch of people in various silos working on their own issues, whether it’s antibiotics, animal welfare, hunger … But you know, until we all get together and support each others’ causes, we’re never going to get anywhere. There’s not enough hunger advocates to push the needle on the issue, unless the whole food movement joins in.

And that’s what I found so frustrating yesterday, seeing many organizations sending out press releases saying, “It’s great news that the farm bill passed.” Do they really think that? They should look at this bill line by line, and then issue a statement with some reservations, and talk about what’s good and what’s bad.

The food movement is fractured, we’re not taking care of each other. That’s why I love the work we’re doing at Food Policy Action, because our board consists of leaders from all parts of the food movement.

A. I was at an event a year or two ago with a bunch of people talking about various food issues, and I asked the group if they thought the food movement could get more political, and that made people nervous. But Marion Nestle was there and she said, “You know what? We have to.” She had just been up on the Hill and mentioned the food movement, and was laughed at. Of course that’s the D.C. bubble for you. But the point is that unless we start getting together and creating more of a grassroots political movement that leans on politicians to make the right decisions, the food movement is going to stumble along. We made some gains on this farm bill, but for hunger advocates, it’s terrible what happened. The environment got killed, too.

We now have 47 million Americans relying on food stamps and the president didn’t mention hunger once in the State of the Union address! And it wasn’t mentioned in any of the 20-plus debates during the last presidential election.

I keep saying that someone has to lose an election over the way they’re voting on food. When that happens, we have a food movement.