We’re serious about keeping farmers market produce on the menu all year long. Alexandra Stafford of Alexandra Cooks shows us how to store, prep, and make the most of it, without wasting a scrap.

My aunt showed up at my door with a chicken, three bundles of leeks, and pounds and pounds of spinach. Her M.O.? The same as all of the Greek women in my family: feed, feed, feed.

No sooner had she kissed me hello than she dropped the chicken into a stock pot, sliced up the leeks, and set a pot of rice on to steam. Shortly thereafter she stood at my counter, pulling chicken from the poached carcass, dropping the meat into a glass bowl as she worked. She was making soup, a process she always begins — no matter the soup — the same way: Place chicken in a pot, cover with water, simmer one hour.

My aunt learned how to cook from her grandmother, a Greek immigrant who, after simmering a chicken to make stock, would salvage the meat from the carcass and serve it immediately with olive oil, salt, and pepper or save it for another use like a simple sandwich or chicken salad. Fifty years later, my aunt is still doing the same thing.

On this recent visit, she introduced me to another soup of her grandmother’s: leek and spinach with a squeeze of lemon. 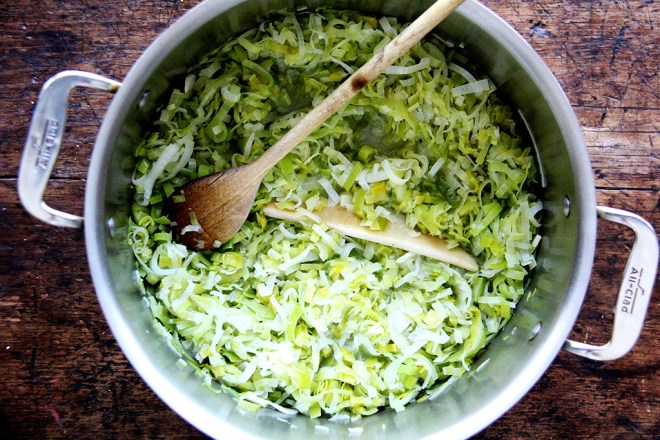 The process is simple: Cook leeks in olive oil and butter until soft, add to chicken broth along with lots of finely chopped spinach. Serve over rice or angel hair pasta with grated cheese and lemon. If you want to make the soup heartier, add some of the pulled chicken meat.

As my aunt cooked, she offered one bit of advice: Cook the leeks slowly over low heat — there should be no browning — until they are completely soft and wilted. Because the chicken broth is so light, and because there are so few ingredients, it’s important to slowly draw out the sweetness of the leeks — it will permeate the broth and ultimately become the predominant flavor of the soup.

I love this soup for its bright green color, its light broth dimpled with drops of oil, and its sweet but delicate flavor. Although leeks are members of the allium (onion and garlic) family, this soup bears little resemblance to an onion soup — the flavor here is still sweet, but somehow more subtle. At once light and comforting, this is a spring soup at its best, one I will happily eat eat eat as long as my aunt is in town. 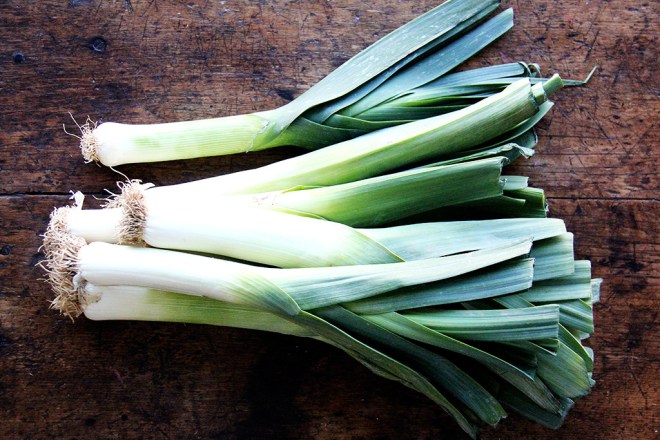 Choosing and storing your leeks:

Look for leeks with firm, white stalks, and upright green tops. Because the best parts of a leek for cooking are those that are white and pale green, look for leeks with a large percentage of white to green. Although leeks are members of the allium family, they tire more quickly than onions and garlic, so store them in an open bag in the vegetable bin of your refrigerator and use them within a week.

Leeks often require a thorough rinsing. Cut off the root end and remove the tough outer layers. If you need to keep the leek intact, make a slit lengthwise starting above the root end. Soak the leeks (intact or slice) in a bowl of cold water for 10 to 15 minutes to allow dirt to settle to the bottom of the bowl, or run them under cold water until dirt is removed. 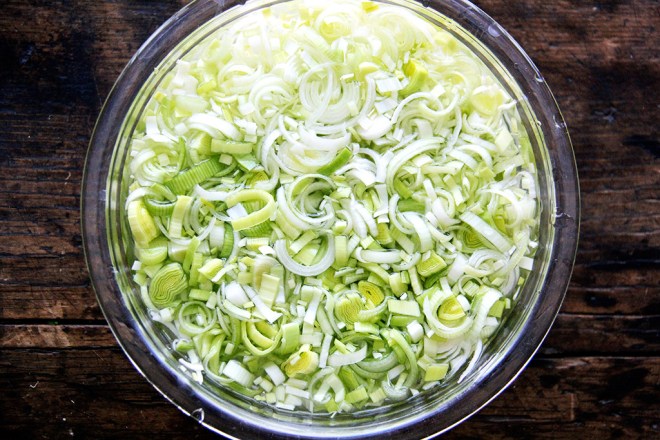 Once you’ve made batch after batch of this soup, here are some ideas for how to use up the rest of the leeks in your haul: 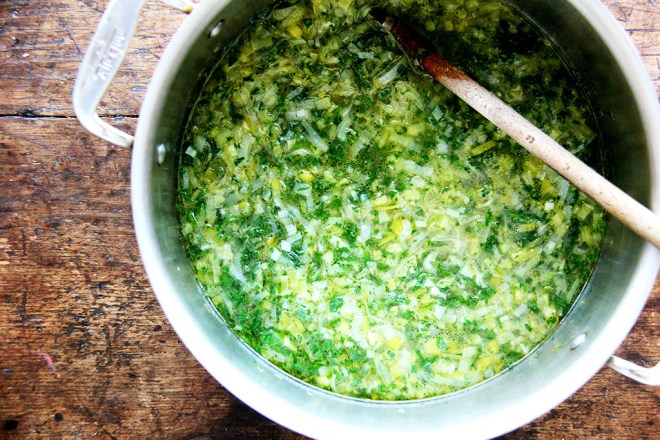 Leek and Spinach Soup
See the full recipe (and save and print it) here.
Serves 8 to 10