After 525 years, it's time to actually listen to Native Americans 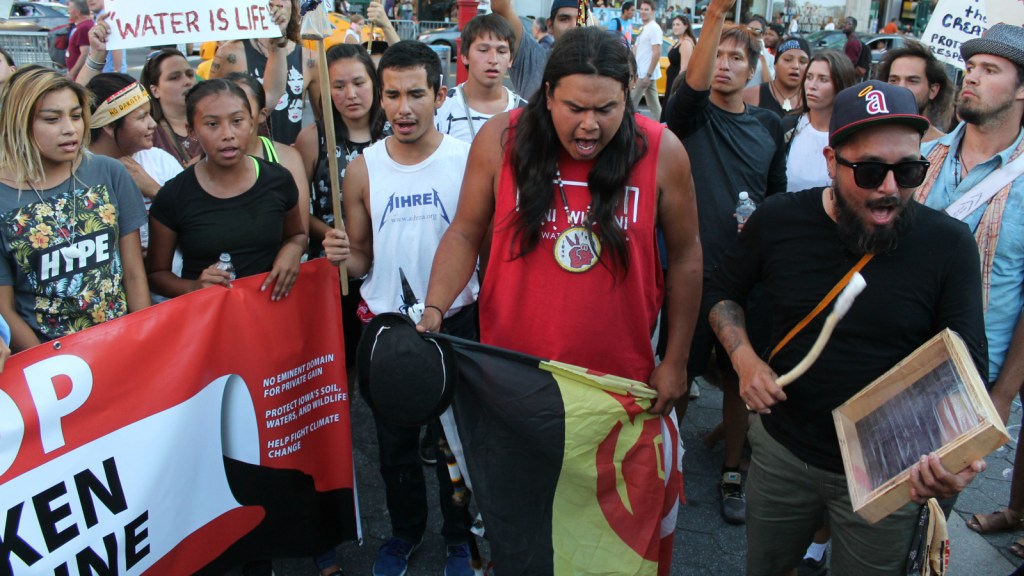 After 525 years, it’s time to actually listen to Native Americans

The center of the fight for our planet’s future shifts. But this week it’s on the Standing Rock Sioux Reservation straddling the border between North Dakota and South Dakota. There, tribal members have been, well, standing like a rock in the way of the planned Dakota Access Pipeline, a huge hose for collecting oil out of the Bakken shale and carrying it off to the Midwest and the Gulf where it can be made into gasoline.

The standoff has been picturesque and dramatic, featuring American Indians on horseback. But mostly it’s been brave and lonely, far from most journalists and up against the same forces that have made life hard for Indigenous Peoples for centuries.

The U.S. Army, for instance. It’s the Army Corps of Engineers that last month granted Energy Transfer Corporation the permit necessary to start construction near the reservation, despite a petition signed by 150,000 people, and carried—on foot—by young people from the reservation all the way to Washington. That would be the same U.S. Army that—well, google “Wounded Knee.” Or “Custer.” “Washita River.” “Pine Ridge.”

That’s not really ancient history, not any of it. It’s the reason that Native Americans live confined to bleak reservations in vast stretches of the country that no one thought were good for much of anything else. But those areas—ironically enough—now turn out to be essential for the production or transportation of the last great stocks of hydrocarbons, the ones whose combustion scientists tell us will take us over the edge of global warming.

And if former generations of the U.S. Army made it possible to grab land from Native people, then this largely civilian era of the Army Corps is making it easy to pollute and spoil what little we left them. As the corporation said over the weekend, it was “constructing this pipeline in accordance with applicable laws, and the local, state and federal permits and approvals we have received.”

But it’s not constructing it in accordance with the laws of physics. July was the hottest month ever recorded on our planet, and likely, say scientists, the hottest month since the beginning of human civilization. And in any event, those “applicable laws, permits, and approvals” are merely the cover for the latest plunder.

A spill from this pipeline would pollute the Missouri River, just as spills in recent years have done irreparable damage to the Kalamazoo and Yellowstone rivers. And that river is both the spiritual and economic lifeblood of the Standing Rock Reservation, one of the poorest census tracts in the entire country.

It would mean that after 525 years, someone had actually paid attention to the good sense that Native Americans have been offering almost from the start. It’s not that American Indians are ecological saints—no human beings are. But as the first people who saw what Europeans did to a continent when given essentially free rein, they were the appalled witnesses to everything from the slaughter of the buffalo to the destruction of the great Pacific salmon runs.

And in recent years they have been the vanguard of the movement to slow down climate change. Why did the Keystone XL pipeline not get built? Above all because Indigenous Peoples on both sides of the border took the lead in a battle that stretched over a decade. Why did Canadian leaders fail in their efforts to replace it with the Northern Gateway pipeline? Because tribes and bands across the west of that country made it clear they could not be bought off. Why will the easiest-to-access deep-water port on the Pacific coast not be turned into the country’s biggest new coal export terminal? Because the Lummi Nation at Cherry Point joined with protesters across the region to say no. This same dynamic is at play around the world, where Indigenous Peoples from the Amazon to the coral atolls of the Pacific are doing more than anyone else to slow down the grinding destruction of our earth.

One has the ominous sense of grim history about to be reenacted at Standing Rock. North Dakota authorities—who are in essence a subsidiary of the fossil fuel industry—have insisted that the Sioux are violent, that they have “pipe bombs.” There are rumors about calling in the National Guard. The possibility for renewed tragedy is very real.

But the possibility for a new outcome is there as well. The Army Corps of Engineers might back off. The president might decide, as he did with Keystone, that this pipeline would “exacerbate” climate change and hence should be reviewed more carefully. We might, after five centuries, actually listen to the only people who’ve ever successfully inhabited this continent for the long term.

If you’re interested in joining the fight but can’t get to North Dakota, there’s a rally on Aug. 24 from 1:00–5:00 p.m. in Washington, D.C., outside the federal court that’s considering challenges to the permits, at 333 Constitution Ave NW.

Bill McKibben is Schumann Distinguished Scholar in Environmental Studies at Middlebury College, and a founder of 350.org. He is a member of Grist’s board of directors.