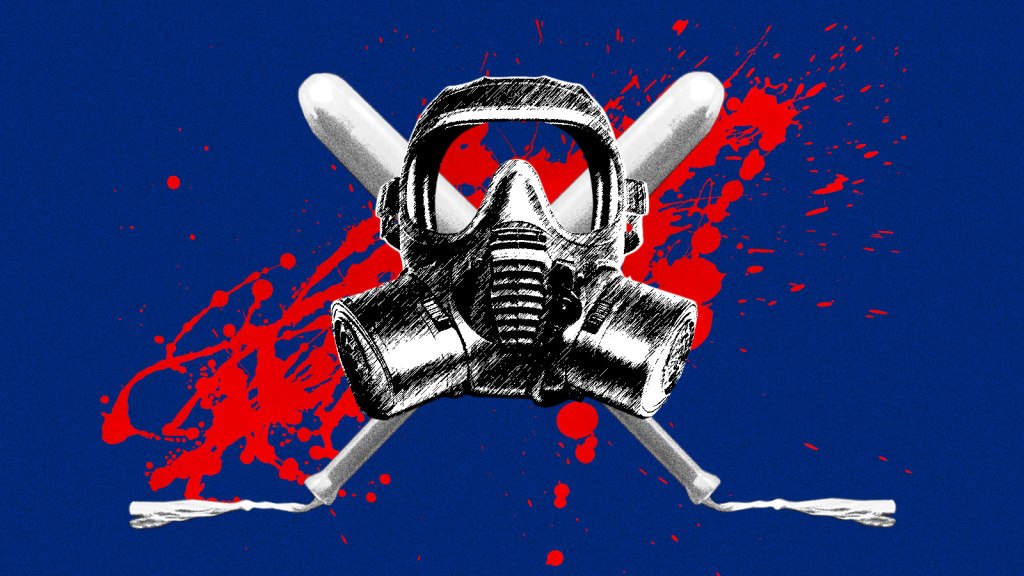 If you found yourself googling “Can tear gas mess with your period” in the last few months, it turns out you aren’t alone.

Several people who were exposed to the tear gas during the recent protests in response to police brutality have come forward online to say they experienced painful disruptions to their menstrual cycle. These anecdotes have prompted concern over the chemical’s impact on reproductive health.

Mallory (who did not want to include her last name due to the personal nature of her experience) was tear gassed by the police in late May as part of a crowd of protestors in Columbus, Ohio. Four days later, she says she got her period — two weeks earlier than expected, and heavier and more painful than she had experienced in a long time.

“I was bleeding through my pants even with a tampon,” she said. “It was pretty overwhelming.”

Ultimately, Mallory says she had two periods in the length of her typical menstrual cycle — the early one, and then one at the usual time. But it wasn’t until she started seeing people connecting the dots between tear gas and menstrual irregularities online that she realized her recent exposure to tear gas might have something to do with it.

She talked to her gynecologist, who didn’t have answers as to whether there was a connection. But Mallory kept thinking about it. “It’s not normal for everyday civilians to be exposed to multiple rounds of tear gas,” she said. She decided to turn to social media to look for answers. She posted on a private Facebook group where locals were sharing information about the protests, and asked if anyone else had had a strange period after breathing in tear gas. Soon, she started to hear from several other people who had attended the protests and had experienced the same thing.

Tear gas is actually a pressurized powder containing a chemical compound called CS, short for 2-chlorobenzalmalononitrile. Tear gas was initially developed for use in warfare during World War I; some scientists have called it “pain gas” as it triggers pain sensing-nerves around the eyes, mouth, and throat. Those effects alone are enough to classify it as a chemical weapon, meaning it is banned in warfare under the Geneva protocol of 1925.

While the reproductive impacts of the gas are not yet well known, it has been linked to other chronic health conditions including asthma, nerve damage, and lung injuries. Some doctors have already raised concerns about the use of tear gas during the COVID-19 pandemic due to the possibility that it could make people more susceptible to complications from the disease.

As for its potential link to reproductive health, “It’s definitely possible that tear gas causes endocrine disruption or hormonal dysregulation,” said Satyanarayana Achanta, assistant professor of anesthesiology at Duke University. But, he added, “there are not many studies conducted on menstrual cycle or pregnancy” following tear gas exposure.

Since the protests over racist police brutality — sparked by the killing of George Floyd by a white Minneapolis police officer — began, American police have used tear gas on civilians in over 100 American cities. Dozens of people who were tear gassed are taking to Twitter to report bouts of early and abnormal menstruation, in some cases despite having hormonal IUDs or taking testosterone, both of which usually prevent or reduce period bleeding.

That’s what happened to Ingrid (who also did not want to publish their last name) after they were tear gassed last month. They were driving through Minneapolis with their partner to drop off groceries at one of the many food relief locations that had popped up throughout the city when they encountered a group of police cars and national guard vehicles. It was after curfew, and Ingrid said it appeared the officers were throwing tear gas canisters at any car they saw out in the streets. As Ingrid drove past, one of them threw a tear gas canister 100 feet or so in front of their car. The gas came through the car’s open windows, burning Ingrid’s eyes and throat, and sending both Ingrid and their partner into coughing intense fits.

A couple days later, Ingrid got their period at the usual time. But then they started bleeding again — and again. Over the next month, Ingrid says they got their period four times, each one heavier and more painful than usual. Ingrid, who has a hormonal IUD and usually experiences light periods, had to go buy tampons. “I don’t remember the last time I had to do that,” they said.

The impact of tear gas on menstrual cycle length is unclear (although it seems like at least one epidemiologist is looking into it), but linkages between tear gas and miscarriage have been documented by a handful of groups: In the 1980s a United Nations spokesperson said tear gas exposure had been linked to “dozens” of miscarriages in Palestine; Physicians for Human rights found an increase in miscarriage rates following use of tear gas against protestors in Bahrain, and the Chilean government temporarily banned the use of tear gas after toxicologists at the University of Chile also found a potential link between the chemical’s use and miscarriage.

Ultimately, though, Achanta says there just isn’t enough research on tear gas on reproductive health and menstruation to say if there’s a clear link. But when asked if he thinks tear gas is safe, he has a clear answer — for anyone. “No.”