‘A stunning betrayal:’ How Democrats voted to give part of a wildlife refuge to the military 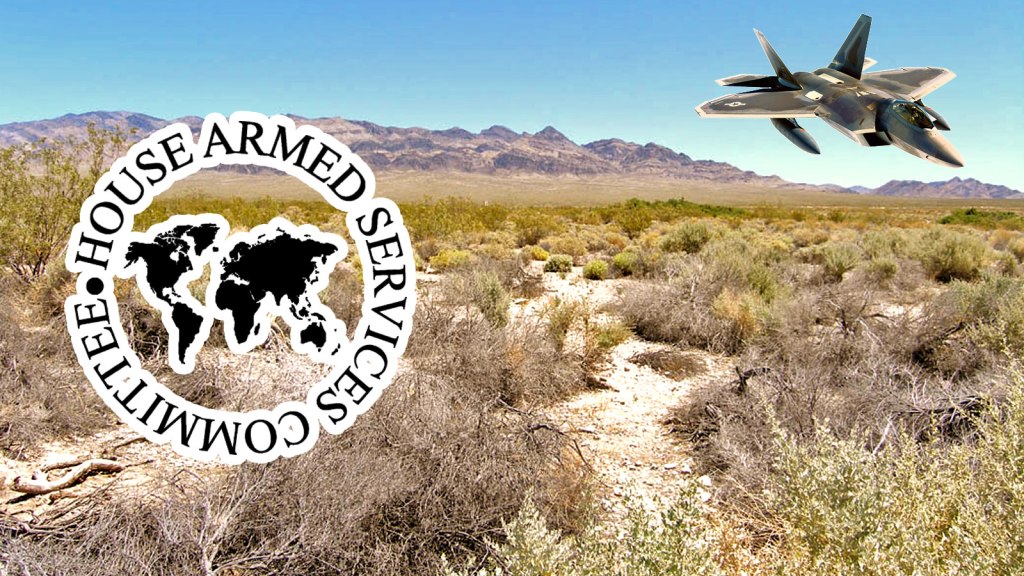 ‘A stunning betrayal:’ How Democrats voted to give part of a wildlife refuge to the military

House Democrats recently introduced a long-awaited 538-page report chock-full of policy proposals to help manage the climate crisis and achieve an equitable economy. But that doesn’t mean the Democratic majority in the House is united in its commitment to the environment.

In a voice vote earlier this month, Democrats on the House Armed Services Committee approved a Republican-introduced amendment to the National Defense Authorization Act that would hand control of more than 850,000 acres of national wildlife refuge in Nevada over to the U.S. Air Force. Patrick Donnelly, Nevada state director for the Center for Biological Diversity, called the vote by the Democratic majority on the committee “a stunning betrayal.”

The fight to preserve the Desert National Wildlife Refuge, which was established in the Mojave Desert by President Franklin D. Roosevelt in 1936 and is the largest national wildlife refuge in the lower 48, has been ongoing for several years now. The Air Force already operates a large base directly adjacent to the refuge. As the agreement stands now, the Air Force has the ability to conduct air drills over the half of the refuge that is closed to the public, provided it leaves the ground-level ecosystem alone. In 2019, the military put forth a proposal to dramatically expand that base, the Nevada Test and Training Range, into the refuge. The Air Force wanted jurisdiction over 70 percent of the refuge to conduct tests and drills, both in the air and on the ground.

In Nevada — a state where 85 percent of the land is federally owned — green groups, veterans, state legislators, tribes, and even pro-military Republicans opposed the Air Force’s proposal. The Moapa Band of Paiutes passed a resolution opposing the proposed expansion of the Nevada Test and Training Range, noting that the region contains sacred lands and cultural resources, and other tribes in the state have opposed the expansion as well. Nevada’s entire state delegation, five Democrats and one Republican, were united against the expansion as well. The refuge is home to iconic species like bighorn sheep and desert tortoises. “They need unbroken, undisturbed habitat,” Donnelly explained. “Most of the desert, they’re dealing with highways, mines, vehicles. Here, they can live their life on their terms.”

Congress’s current authorization for the Air Force base expires in 2021, so its biggest opportunity to seize control of the refuge is the ongoing negotiation of the National Defense Authorization Act for fiscal year 2021. Environmental groups like the Center for Biological Diversity thought the military’s best chance for expanding its footprint was in the Senate Armed Services Committee, which is helmed by Senator Jim Inhofe — the guy who brought a snowball to the Senate floor in 2015 to disprove rising temperatures. But the Senate committee voted to renew the military’s base in Nevada as is, not an acre more or less.

Then, the Democratically-controlled House Armed Services Committee got its opportunity to tinker with the National Defense Authorization Act. Republican Representative Rob Bishop from Utah, a member of the committee, introduced an amendment that would give the Air Force the final say in any disagreements between the two agencies over the half of the refuge the Air Force already conducts drills over — more than 850,000 acres.

It’s still unclear why the majority side of the House Armed Services Committee approved the amendment. In a statement to Grist, a House committee aide said that the amendment “ensures that tribes and refuge personnel who currently cannot access the parts of the refuge that overlap the Nevada Test and Training Range, will be able to enter into an agreement with the Air Force to access it for the purposes of refuge and cultural resource management.”

The committee aide added that there will be an opportunity to make “technical edits to clarify the intent of the amendment and ensure that the Department of the Interior continues to have a lead role in managing the refuge.”

After the amendment was passed, members of the Nevada congressional delegation, including its sole Republican member, said they were caught off guard by the amendment and asked the committee to reverse it. “It wasn’t vetted,” Representative Mark Amodei, the Republican, told E&E News. Representative Bishop told E&E that he wasn’t trying to hoodwink his Nevada colleagues into handing over control of the refuge to the military. “I’m somewhat taken aback and frustrated to think they didn’t understand what was going on because there was no reason they should not have,” he said.

On Monday, three Democratic members of the Nevada delegation, Representatives Steven Horsford, Susie Lee, and Dina Titus, introduced an alternative amendment that would let the Fish and Wildlife Service retain authority over the refuge. “We simply cannot allow the largest wildlife refuge in the contiguous United States to be decimated,” Titus said in a statement.

Bishop’s amendment needs to clear several procedural hurdles before it gets to the president’s desk — including a trip to the House floor for a full vote. If it succeeds, it would potentially open up the Mojave Desert refuge to a flurry of activity: roads across the untouched landscape, frequent shooting simulations, and new radar stations the size of semi trucks.

Whether Bishop’s amendment survives a full House vote remains to be seen. If the amendment remains intact, Donnelly said it’s a sign that House Democrats need to do some introspection. “We’re in a pickle where Jim Inhofe is being outflanked to the right by House Democrats,” he said. “What does that tell you?”