Cities are shutting down bikeshares during curfews, stranding their own residents 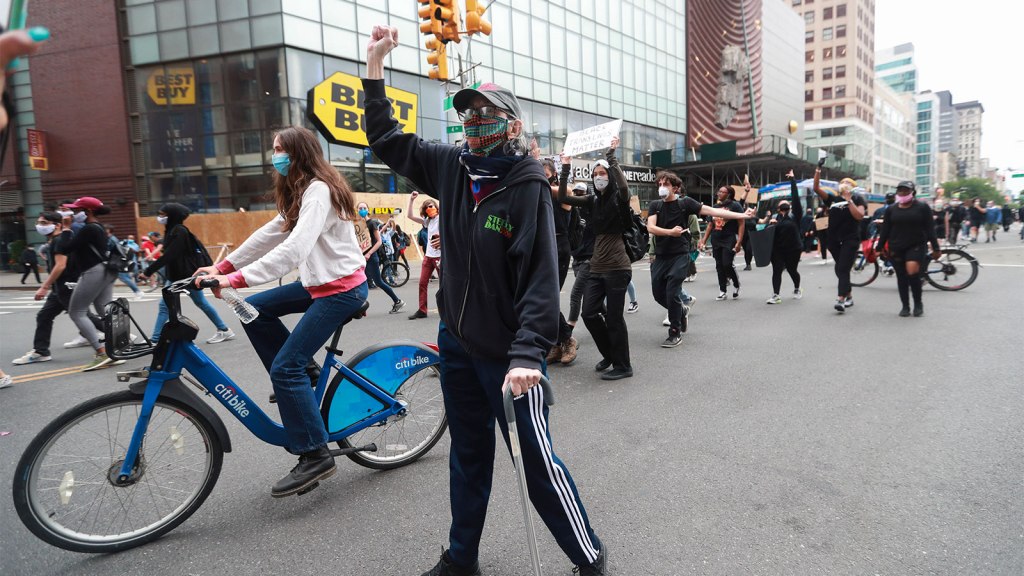 Cities are shutting down bikeshares during curfews, stranding their own residents

Over the past several days, hundreds of thousands of Americans have hit the streets to protest the killing of George Floyd, a 46-year-old black man who was asphyxiated by a police officer on May 25 in Minneapolis. The protests started in the city where Floyd was killed and spread rapidly to all 50 U.S. states and at least three U.S territories.

In response, mayors and governors have instituted rare nighttime curfews in an effort to deter clashes between police and protestors — which videos show are often instigated by police — and waves of looting and property damage. But the curfews aren’t keeping protesters off the streets: People in major cities have been out long past nightfall protesting the national crisis of police brutality. And essential workers are largely exempt from the curfews, leading to confusion among people who work night shifts.

No matter the reason they’re out during curfew, people trying to get home are finding that their options are limited. Some cities, like Los Angeles and Chicago, have shut down public transportation systems in response to the protests, stranding people who are out after curfew. In some areas, like parts of Manhattan, even driving has been prohibited. And bikeshare programs, which have been a key source of safe transportation for essential workers during the coronavirus pandemic, have been directed to hit the pause button by city officials during the curfews.

That means protesters and other people just trying to get around in the middle of an ongoing pandemic are being forced to get places by foot. In New York City, the city’s privately-owned bikeshare program, CitiBike, was directed by the mayor to shut down during the curfew on Monday and Tuesday. “We disagree with this decision,” the company said in a tweet thread.

As directed by @NYCMayorsOffice, we are temporarily shutting down service tonight, restarting as soon as curfew is lifted at 5am.

We know NYC is hurting right now. We’re still discussing options for providing service during curfew hours and will share more when we can.

On Wednesday, CitiBike will be required to end service at 6 p.m. — two hours before the curfew begins.

Similar programs in D.C., Houston, Chicago, Minneapolis, and L.A. shut down during curfews too. Some of those programs, like Houston’s BCycle and Minneapolis’ Nice Ride, are owned by nonprofits. Others, like Chicago’s Divvy and D.C.’s Capital Bikeshare, are housed within each city’s Department of Transportation. Philadelphia’s city-run bikeshare program, Indego, bucked the trend by staying open during curfew.

There is a city-wide curfew from 8:30 pm tonight – 6 am tomorrow. Indego will remain in service for those who need to reach critical resources. Please keep each other safe by staying home this evening.

Alan Mitchell, former chief of staff at Motivate, the company that owned and operated CitiBike before Lyft bought the program in 2018, thinks shutting down bikeshare programs amid protests is a bad idea. “I think it prevents essential workers from getting to their jobs, I think it makes people less safe, and I think it’s a disgrace for the mayor to have ordered that,” he told Grist, referring specifically to New York City Mayor Bill de Blasio.

As it is, bikeshare programs, which have been touted as a greener, healthier, and better way for city-dwellers to get around, have an equity problem. A huge majority of bikeshare users are white and wealthy, in large part because bikeshare docks tend to get built in majority-white neighborhoods while leaving majority-nonwhite neighborhoods behind. In D.C., a city that is 50 percent black, only 4 percent of bikeshare members were African American in 2016. Just 2 percent of Chicago’s bikeshare program users were black, according to 2017 data.

And when people of color do use bikeshare programs, or just cycle in general, they’re more likely to face police harassment for it. A study on sidewalk biking bans in NYC between 2008 and 2011 found that bans were disproportionately enforced on Black and Latino bikers. In Fort Lauderdale, Florida, 86 percent of police citations for biking violations were issued to African Americansin the years between 2010 and 2013.

We recognize that our efforts to build a bikeshare system for all will be incomplete without sustained, explicit efforts to dismantle racist systems.

One way city officials and bikeshare programs could start doing just that? Make bikeshares available around the clock, whether or not there’s a curfew.