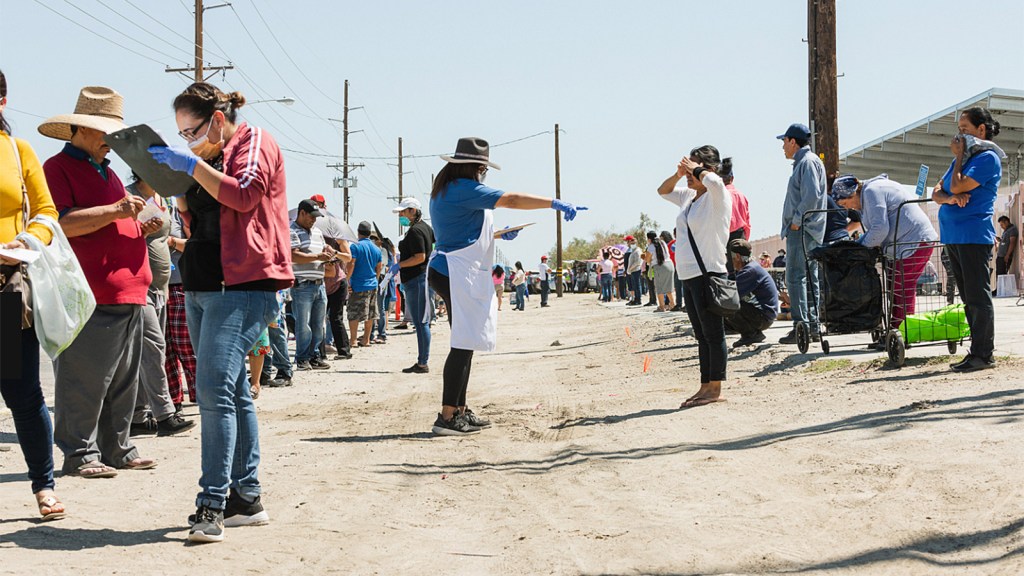 *Note: Some names have been changed in order to protect sources with undocumented status.

For the past five years, Juanita*, a resident of the border town of Mexicali, Mexico, has spent the spring and summer seasons in Southern California’s Eastern Coachella Valley, picking grapes, beets, blueberries, and bell peppers, and then heading north for similar work in Northern California come July, once Coachella’s daytime temperatures become unbearable — 120 degrees Fahrenheit. This year, however, the 66-year-old grandmother finds herself unexpectedly idle. At the end of March, she was working only two days out of six. “They cut all of our hours,” she said, wondering just how much longer she could afford to linger here, waiting for work — and pay.

In California and across the country, agricultural businesses have remained open, classified as “essential.” The farmworkers who are still employed continue to work, despite the lack of protective gear, or unemployment benefits if they fall ill. Farmworkers are especially vulnerable given the difficulty of social distancing in the fields and the underlying health conditions, like asthma, diabetes, and long-term exposure to pesticides, associated with agricultural work. Many also share housing and the buses that bring them to and from work.

Coachella Mayor Stephen Hernandez is not surprised by the furloughs. The closure of restaurants, schools, and large businesses has affected farms’ bottom lines, and some can’t afford to keep their workers employed. One report, from the National Agriculture Sustainable Coalition, projects that shutdowns of non-essential businesses may cause small farms selling locally to lose up to $688.7 million. Eastern Coachella Valley is “probably another two or three weeks from plowing unsold crops into the ground, as has happened in other parts of the country,” Hernandez said.

The Coachella Valley stretches 45 miles from Palm Springs to the Salton Sea. The west side’s mid-century homes draped in blooming bougainvillea and its lush green golf courses vanish as you move to the east, where many of the region’s low-wage workers reside. There, rundown mobile homes and squat abodes appear even smaller against the vast desert and intermittent fields and orchards, which produce 95 percent of the country’s dates and nearly a billion dollars in fruits, vegetables, and other agricultural products.

The western valley is “a place where presidents go to retire,”said Anna Lisa Vargas, a lifelong Coachella Valley resident and community organizer. In the eastern valley, on the other hand, some residents still lack paved roads, sewage systems, and municipal water — creating “a Third World within a First World.”

Over 97 percent of Eastern Coachella Valley’s roughly 147,500 residents are Latino, compared to 69.5 percent in Coachella Valley overall, and an estimated 14 percent in the unincorporated communities are undocumented. About a quarter are farmworkers, while another 40 percent work in low-paying jobs in the food, health-care, and service industries. Up to half of the eastern valley’s residents live below the federal poverty line, with people in the unincorporated communities making a median income of just $18,700. Foreign-born residents, who work in the fields at higher rates, earn up to a median of $3,000 less.

Even before the pandemic, many lived “paycheck by paycheck,” said Gloria Gomez, the cofounder and executive director of the Galilee Center, a nonprofit located in Mecca. Galilee provides food, clothing, shelter, and cash assistance to the area’s neediest residents, many of whom are seniors who still work in the fields, despite their increased risk of contracting the coronavirus. To survive, they have to work, she said. Since December 2017, the Galilee Center has also operated a migrant shelter that accommodates between 75-100 workers nightly. For $5 a night, workers have access to a clean bed, shower, air conditioning, WiFi, and three meals a day. Still, Galilee is unable to accommodate everyone, and during the height of the harvest season, some 50 farm workers still sleep on the packed earth of the vacant lot across the street, as they have for decades.

This year, Galilee will be able to house even fewer migrants owing to social distancing guidelines: When beds are placed 6 feet apart, the shelter can provide only 30 of them. The shelter has set up a separate isolation area for anyone who exhibits COVID-19 symptoms; other preventive measures include temperature and symptoms checks at the door, an earlier curfew, rotating shifts for staff members to limit the number of people in the office, and a full cleanup of the facilities every two hours.“We’re concerned,”Gomez says,“but we’re here to serve,” so she has no plans to close.

The demand for Galilee’s services, meanwhile, has gone up. Its food distribution, which, by early April, had moved to car-only, is now held only once a week to limit the number of large gatherings. Galilee has gone from giving out 250 food baskets before COVID-19, to 700. Even so, it cannot meet the demand.

At first, the coronavirus seemed to be targeting the geographically more mobile communities of the west. But by early April, that trend had reversed, with over half a dozen agricultural workers at a date packinghouse in the Eastern Coachella Valley testing positive. “We know it [the coronavirus] is going to happen at one point or another, but up to right now, we [at the center] have no symptoms,” Gomez said in April. Gomez adds that the center has seen an increase in requests for help in paying rent, utilities, and even diapers. At the same time, its own finances are increasingly precarious, with donations dropping 50 percent in March alone. Special COVID funds have helped, however, including a grant from the Desert Healthcare District, while continuing emergency assistance funds have kicked in for one of its partners, the FIND Food Bank.

With the coronavirus entering her community, Dominga, a 20-year resident of Mecca, an unincorporated community in the Eastern Coachella Valley, doesn’t want to go into the fields. Not working is not an option, however. The 37-year-old mother of three daughters has worked an average of four or five days, out of a six-day workweek, planting and picking red bell peppers, since the coronavirus hit. “We’re only 24-26 people working two fields together, when before just one field needed around 30-32 people,”she said.“With so many people that are unemployed right now, I tell myself that I’m fortunate to be working. I have my daughters, and every day I think about them when I leave.”