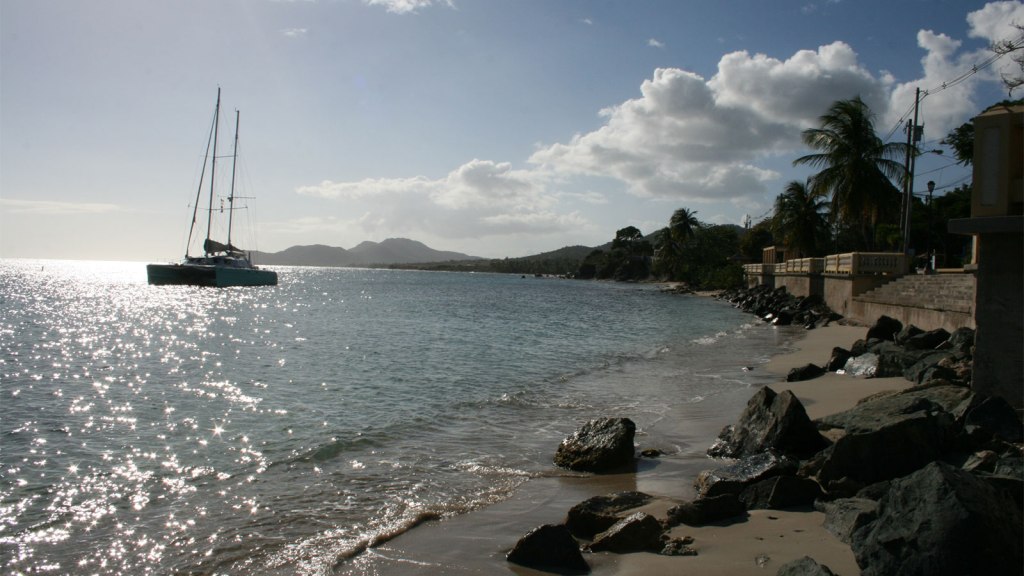 To visitors, Vieques, the small island community off the eastern coast of Puerto Rico, looks much the way it did before Hurricanes Irma and Maria wreaked havoc in September 2017. Business is booming at the bar and hostel Stephanie Latona manages, a colorful beachside shack popular among visitors. Federal relief has mostly benefited tourist areas, and tourism has returned to pre-hurricane numbers.

To Latona, however, Vieques is meaningfully different. One of the most noticeable things that’s changed since the hurricanes, Latona says, is that there are fewer familiar faces. “The community definitely feels like it’s gotten smaller,” she said. “People who left after Maria — or even Irma — stuck around until the next storm, but eventually gave up trying to rebuild and left.”

Latona understands why some of her neighbors packed up for good. In the two years since Maria, the local hospital has yet to be rebuilt, and getting to the nearest alternative requires a sometimes hours-long commute to the Puerto Rican mainland. Many of the stores in her neighborhood have closed, leaving food supplies limited. Then there are the frequent power outages.

Watching the community shrink has been hard on Latona’s 6-year-old son. Every time a classmate stops showing up for school, she has another conversation with him about the trauma they’ve been through and the choice they’ve made to stay — for now, at least.

Puerto Ricans had already been leaving in droves prior to Maria. With a struggling economy, the population dropped 9 percent between 2000 and 2015. After the twin hurricanes of 2017, as many as 210,000 sought refuge in the mainland U.S. As of last December, more than 130,000 Puerto Ricans never returned. The U.S. Census Bureau estimates Puerto Rico’s population will decrease to 2.98 million by 2050, its lowest level since 1980.

“There’s a real sense of ‘what’s the point of coming back?’’’ Latona said, describing the perspective of Puerto Ricans who have left. “Why bother toughing it out and returning if the next catastrophe that makes you lose everything is just another season away?”

It’s an increasingly urgent question for many of the Caribbean’s 43 million residents. The Caribbean contributes less than one percent of all global CO2 emissions but is subject to disproportionate consequences of warming temperatures and sea level rise, in the form of tropical storms.

But when Caribbean climate refugees seek help from the world’s biggest cumulative CO2 emitter — that would be the United States — they haven’t been received very warmly. In the past, accepting climate refugees was seen as a bipartisan value. Breaking from the norm, the Trump administration denied the designation of Temporary Protected Status to the estimated 70,000 Bahamians who were left homeless after Hurricane Dorian decimated Grand Bahama and Abacos islands this August. Florida’s Republican Governor Rick DeSantis has publicly discouraged Bahamians from moving to the Sunshine State post-Dorian.

“You can sense a difference — the relief feels more temporary than before.” said Marlon Hill, a Miami-based attorney and liaison for climate migrants from the Caribbean. “Just the rhetoric from our President invokes stereotypes about immigrants coming here and becoming a burden when most research shows they’re a benefit.”

“What happened in many of these cases was that older Puerto Ricans rejected these folks,” Seth Schwartz, the study’s co-author and a professor of public health sciences at the University of Miami, told the The Ledger, a central Florida newspaper.

With a sustained uptick in Puerto Ricans moving to Central Florida after Maria, their Democratic-leaning votes are predicted to be a political force rivaling Republican-leaning Cuban-Americans. And not everyone is happy about the demographic shift.

“After Maria, it looked good to care about Boricuas, people came to shake hands and take photos in our communities,” Rios-Andino said. “But then politicians realize we come here and can vote. Now they’re accountable to us, and that’s when you began to notice the welcome mat disappearing.”

And then there are the less tangible challenges of migrating after a climate disaster. Moving can make migrants feel like they’re abandoning their native communities in a time of need.

“That can compound the trauma and stress for migrants who are seeking to escape disasters at home,” said Adelle Thomas, a Bahamas-based senior researcher with Climate Analytics, an environmental research and policy organization. Her research has shed light on the mental health vulnerabilities of Bahamians who migrate after storms.

Caribbean residents who decide not to leave home after a climate-related disaster face their own unique challenges. After Hurricane Irma damaged 95 percent of Barbuda’s infrastructure in 2017, residents who returned home found a government that seemed friendlier toward foreign investors than its own citizens. And then there are the psychological impacts of living in a declining community.

“As you watch your homeland permanently change around you, it’s that loss of community that can have long-term mental health effects like PTSD and depression,” Thomas said.

Latona’s family has felt the stresses of both leaving and staying. After Hurricane Maria, she gave up and temporarily relocated with her son to Wisconsin. But unlike thousands of Puerto Ricans who have since made permanent homes in Florida, New York, and elsewhere, Latona decided to give life in Vieques another try.

She has found that taking vacations to the U.S. mainland helps alleviate the stress of boil-water notices, inoperable power generators, and two-hour ferries to San Juan for doctor’s appointments. On a recent flight back from the Midwest, Latona was coincidentally seated behind a Vieques native heading home from Chicago.

“We just immediately bonded knowing the struggle living on the island can be, but how it can also motivate you,” she said. “[Vieques] is our community, the entire island is our family. The tougher it gets, the more we stick together and tough it out.”

But with climate change a looming threat, Latona admits she doesn’t know how many more return flights she’ll be willing to make.