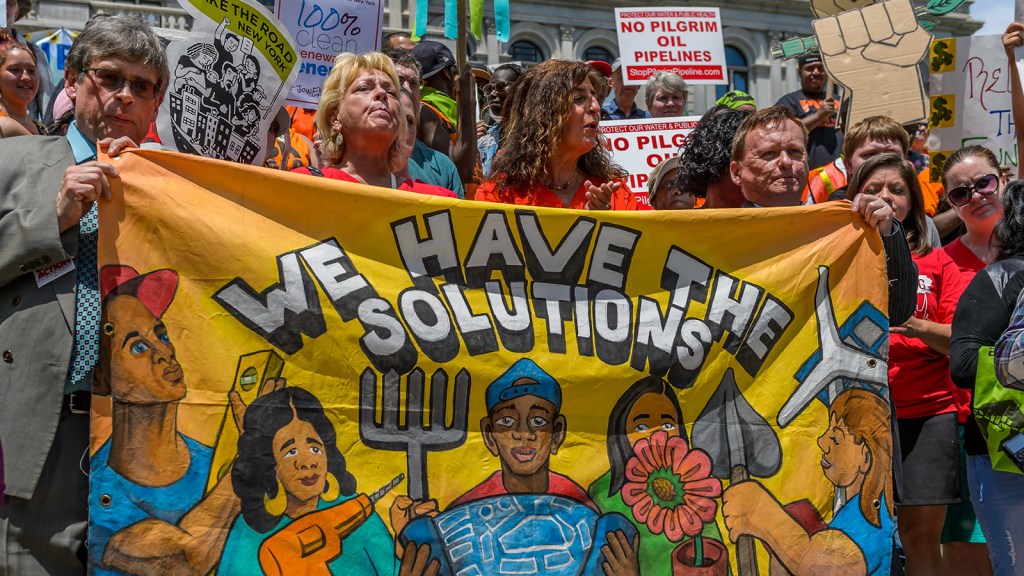 New York state’s landmark climate legislation has finally reached the finish line after a four-year marathon through Albany. And that means it’s reached the starting line for the state’s race to net-zero emissions.

The climate law, originally called the Climate and Community Protection Act but ultimately dubbed the Climate Leadership and Community Protection Act, struggled to make it past the Republican-controlled state senate for three years until Democrats finally won it back in 2018. Although New York Governor Andrew Cuomo altered the bill by slashing some labor and social justice provisions last summer, the CLCPA was still considered a major win for climate activists when Cuomo signed it into law in July with former Vice President Al Gore at his side.

So what happens now that the environmental justice bill and the CLCPA are in effect? The CLCPA made headlines for being the most ambitious emissions-reduction legislation in the country thanks to its promises to reach net-zero emissions by 2050 and 100 percent renewable electricity by 2040. But in the short term, the main outcomes of the two new laws will be … new policymaking bodies!

Meanwhile, the environmental justice bill will create a permanent environmental justice advisory group within the existing Department of Environmental Conservation, plus an interagency coordinating council that will make sure New York state agencies are treating New Yorkers fairly when it comes to the enforcement of environmental policies. Since low-income communities of color tend to bear the brunt of the fossil fuel industry’s social costs, the goal is to ensure that vulnerable or disadvantaged communities aren’t suffering negative environmental consequences from state policies.

The advisory group will also advise agencies on decisions like land-use permits for fossil fuel projects and monitor their compliance with the environmental justice policies.

New York Renews, a statewide coalition of nearly 200 advocacy groups, pushed for the environmental justice bill to be passed alongside the CLCPA, and for the CLCPA itself to include environmental justice provisions. “Protecting vulnerable populations, communities of color, and low-income communities should be a priority for all climate solutions,” said Adrien Salazar, a campaign strategist at progressive think tank Demos and a 2019 Grist 50 Fixer. “Science has shown consistently that communities of color and low-income neighborhoods are most vulnerable to climate impacts and pollution. This is why equity and justice was written into the CLCPA.”

But the CLCPA and environmental justice bill are binding — they require the state to meet its emissions reduction targets and make good on its commitments to address environmental injustice and invest in vulnerable communities. But Salazar, whose organization is part of New York Renews, warned that if agencies fail to mobilize adequate resources and put significant plans into motion, New York could very well fail to reach the goals it sets for itself.

“This will take every agency setting up programs and policies to meet the state’s goals, directing resources accordingly, and beginning to enact those plans starting now,” he said. “The state has to demonstrate how important it is to not just pass bold climate policy but to get the implementation right.”