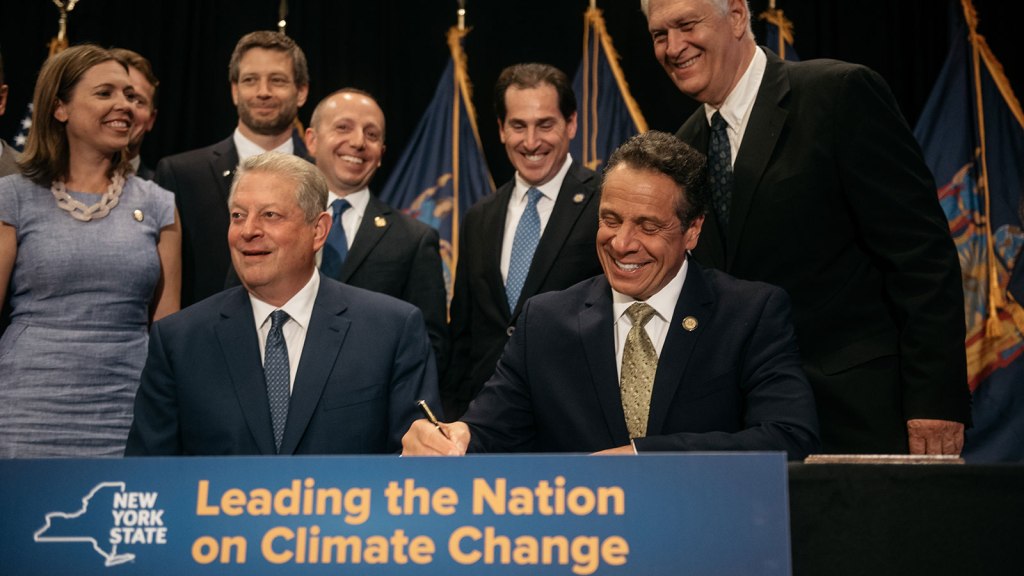 Five months ago, a crowd of climate activists gathered at the New York State Capitol, cheering as Governor Andrew Cuomo signed legislation that was widely hailed for containing the nation’s most ambitious emissions-reduction targets. The Climate Leadership and Community Protection Act commits the Empire State to net-zero carbon emissions by 2050 and an emissions-free electric sector by 2040.

To those watching from the front row, it has been a roller-coaster ride for the CLCPA. The Republican-controlled state Senate blocked the bill for three years running until Democrats took control in 2018, and Cuomo eliminated some labor and social justice provisions as this year’s legislative session drew to a close. But even though the bill was signed into law months ago, the roller-coaster ride isn’t over yet.

This separate environmental justice bill, which was passed by the state senate and assembly in June, specifies that it will go into effect “on the first of January next succeeding the date on which it shall have become a law.” With (checks calendar) two weeks left, Cuomo only has a small window of time left to sign it if he wants it to go into effect in 2020. Signing the environmental justice bill after January 1, 2020 means that it, along with the CLCPA, will be delayed until January 1, 2021, impeding the Empire State’s efforts to slash greenhouse gas emissions.

“We cannot wait around,” said Arielle Swernoff, communications coordinator for New York Renews, the statewide coalition of more than 180 advocacy groups that have pushed for the climate legislation since 2015. “If Cuomo signs the environmental justice bill later next year, then the CLCPA doesn’t go into effect in 2021, and that is completely unacceptable.”

Cuomo’s office told the New York Times that the governor has not yet signed 168 bills passed by the legislature this year, including the environmental justice bill, because of a time-consuming review process. “It is our responsibility to ensure that the bills, as written, are responsible, enforceable and accomplish their intended purpose,” Cuomo’s communication director told the Times.

But environmental advocates are anxious for Cuomo to take action before the clock runs out. “The IPCC report says that we have a few years left, and every year counts,” said Swernoff. “We can’t drag our feet. The scale of climate injustice is so large and it’s already impacting and killing people everyday, so we can’t wait on addressing it.”