Protestors turn a federal offshore oil auction into a circus 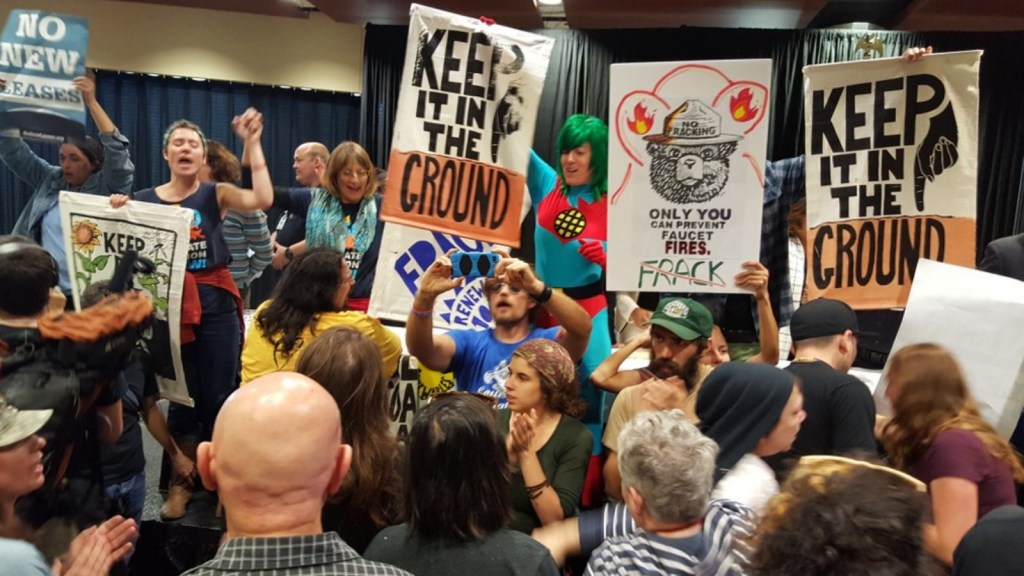 Protestors turn a federal offshore oil auction into a circus

About 150 activists disrupted a federal auction for offshore oil and gas leases on Wednesday at the New Orleans’ Superdome, taking over what’s normally a sedate meeting to make a statement against fossil fuels.

The anti-drilling protest included members of national environmental groups, community advocates and indigenous rights groups who want the Obama administration to close off the Gulf of Mexico to more offshore development.

“There was singing and chanting, and the industry guys actually managed to hold the lease sale over all the yelling,”  Marissa Knodel, a climate campaigner with Friends of the Earth who marched with the group on Wednesday told Grist, adding that the protestors stayed in the room for about an hour as the auction continued. “We definitely made a strong stand.”

Check out the chaos for yourself:

Fed oil lease sale has been taken over by water protectors and land defenders of the Gulf Coast! #NoNewLeases pic.twitter.com/wPSR0Ml3ra

This protest countered a Bureau of Ocean Energy Management auction for two planned sales off the coast of the Gulf of Mexico on tracts located anywhere from approximately three to 230 miles off the coasts of Louisiana, Mississippi, and Alabama. The area, said to contain the say the eighth-largest carbon reserve on Earth, stretches across about 45 million acres. According to Politico, BOEM took bids on one of the two sales on Wednesday.

The Obama administration this month reversed an earlier plan that would allow drilling off the Atlantic coast, but he hasn’t spared the Gulf of Mexico from future drilling. The Gulf could be up for 10 new leases from 2017-2022, and activists haven’t lost hope that the Gulf of Mexico will be taken off the table, as well.

“Here in Gulf, this is the first time people from all over the coast and the country have converged to demand no new leases on oil and gas.” Knodel added the protesters will be back the next time there’s an auction in August.