Aging water infrastructure needs constant attention and investment to ensure safety for everyone — especially if the U.S. wants to avoid another Flint water crisis. According to the Environmental Protection Agency, water utility companies should invest more than $300 billion over the next two decades to renew and improve their networks of service lines and underground pipes, many of which contain lead. In part this is because the health effects of lead exposure are so severe: Even low levels can cause irreversible neurological damage.

Eliminating lead pipes across the country is the ultimate goal, but the standard practice of many utilities makes this exceptionally difficult. Utilities generally consider pipes on private property as belonging to customers — so they often won’t use government or utility money to replace them. Instead, they’ll opt to replace only the portion of the system on public property, unless homeowners volunteer to pay for service line replacements on their lots. If property owners fail to opt in, the lead service line is only partially replaced — and this ultimately provides limited or no long-term decrease in exposure risks. In fact, it can actually increase the possibility of lead seeping into drinking water in the short term.

As a result of this approach, low-income communities of color can see much spottier replacement rates in their neighborhoods — in large part because property owners in these areas are unwilling or simply unable to front the significant costs required to achieve a full replacement of service lines.

“If a program primarily benefits those with money, you’re going to have an environmental justice problem,” said Tom Neltner, chemicals policy director with the Environmental Defense Fund (EDF). “We need to make sure all residents, without regard to how much money they make or the color of their skin, benefit from these rules designed to protect people and protect public health.”

A new report from the EDF and American University’s Center for Environmental Policy bears this out. Researchers analyzed more than 3,400 lead service line replacements in Washington, D.C., that occurred between 2009 and 2018. During this 10-year period, the local water utility only covered the cost of replacing lead service lines on public property, requiring customers to pay for the remainder of the service occurring on private property.

After cross-examining the city’s neighborhood demographics and the participation rate of those who chose to front service costs, researchers discovered vast disparities between predominantly low-income African American households and wealthier white households. The city’s Ward 3, for instance, where the median household income is $107,499 and a large majority of residents don’t identify as black or African American, had the highest rate of customer-initiated lead service line replacements. Meanwhile, Wards 7 and 8, both predominantly low-income black neighborhoods, had the lowest rates of service replacements. 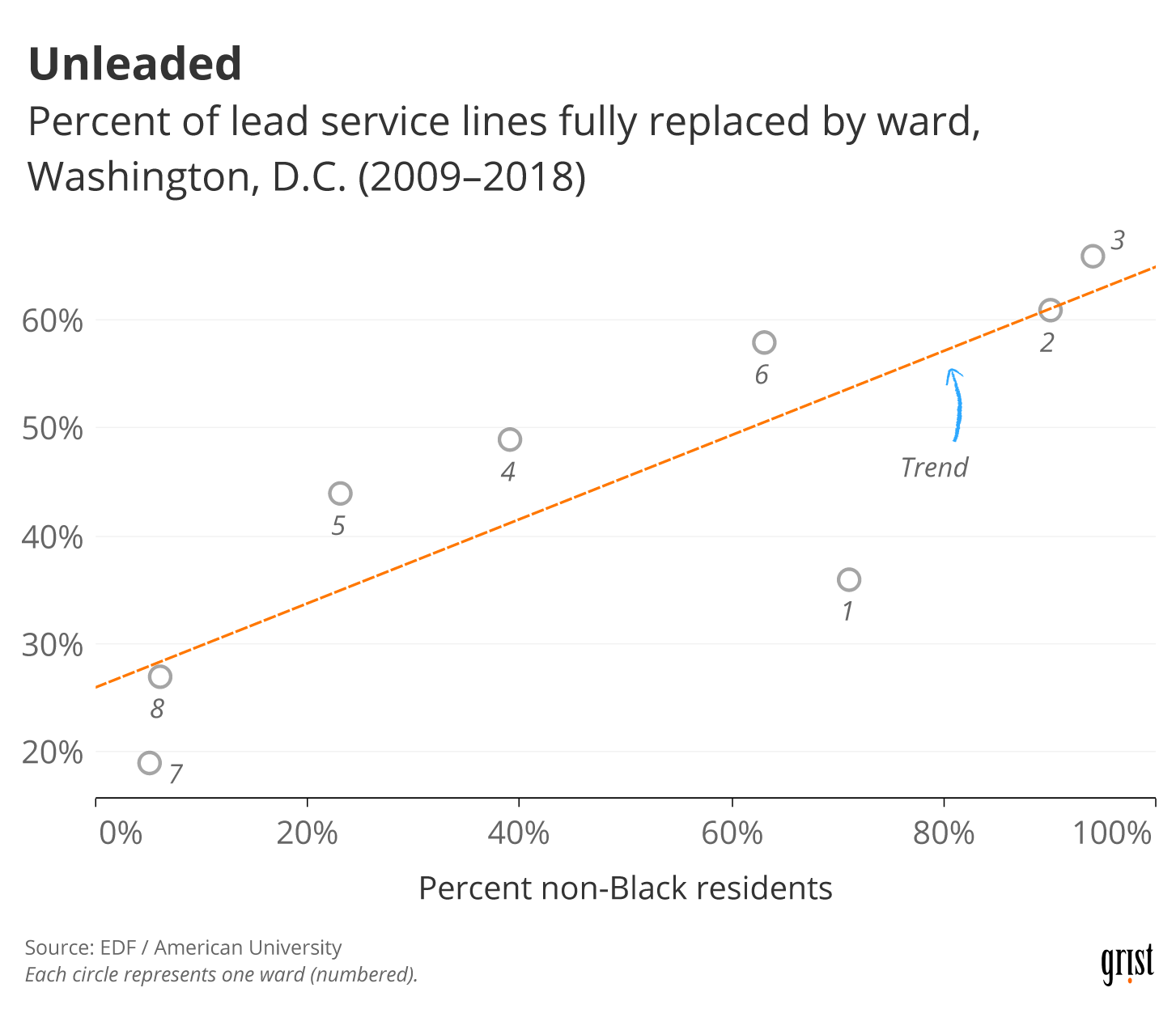 “Washington D.C. was very aggressive in a good way in making it easy for residents to participate,” said Neltner. “But the numbers showed us results of the unintended consequence — where people with money participated in the program and those without, didn’t.”

The analysis also highlights that the Trump administration’s recent proposed revisions to the Lead and Copper Rule would amplify the financial burden on low-income communities of color by continuing the existing replacement paradigm, where utilities are only responsible for paying for lead pipe replacements on public property.

“We work closely with utilities across the country, and what they need is to find a way to move out of this paradigm that residents are fully responsible for paying to replace on private property,” Neltner said. “I want them to look and say: ‘We need to do this not only for public health benefit, but also because of environmental justice concerns.’”

As of today, Madison, Wisconsin, and Lansing, Michigan, are the only major cities ahead of the curve, having successfully removed all of their aging lead service lines. It wasn’t easy for Madison, but after court hearings and public battles, officials eventually launched an ambitious program in 2000 to replace every single lead service pipe across the city. Lansing, Michigan, followed suit and removed its last lead water service line in 2016. After what happened in Flint, Michigan, many other cities are also beginning to move more quickly towards the same goal of eliminating lead-based pipes.

Last year, Washington, D.C., passed a new law that bans partial lead service line replacements during infrastructure projects and emergency repairs — meaning property owners no longer have to shoulder the costs in these cases. The policy also amends the previous regulations by providing financial support to homeowners who didn’t get a chance to replace their pipes under the old policy.

“It’s going to take a while, but we need every opportunity we can get to fully replace these lines,” said Neltner. “Once you realize that lead pipes are a significant source of health risk to children and adults, you then realize you need to get them out of the ground.”