Last Friday, 35 Philadelphians rose early to board a charter bus bound for New York City at 6:30 a.m. That day, a closed-door auction held in Manhattan would determine the new owner of the 1,300-acre plot that housed Philadelphia Energy Solutions, the largest oil refinery on the East Coast, which filed for bankruptcy after an explosion and fire tore through the complex last summer. Though they wouldn’t be allowed to attend the auction, the Philadelphians on the bus — members of a grassroots environmental justice group called Philly Thrive — were determined to have a say in the fate of the land. Their hope? To prevent it from ever operating as a refinery again.

Alongside New York-based climate activists, Philly Thrive set up shop in the lobby of the building where the auction was taking place on the 50th floor. One by one, the activists walked up to the security guards and asked if they could go upstairs. They said things like “My life is at stake here” and “I have as much of a say as the men in suits upstairs.” Later, the protestors sang, told stories about how the refinery affected their health, and recited poems as office workers stepping out for lunch navigated their way through.

“These polluting industries think they can come into our communities and just set up shop,” Cameron Powell, a Philly Thrive organizer, told Grist. “They’re destroying the environment, and they think that’s okay. We as residents of the city of Philadelphia and New York are simply here to let them know that it’s not.” 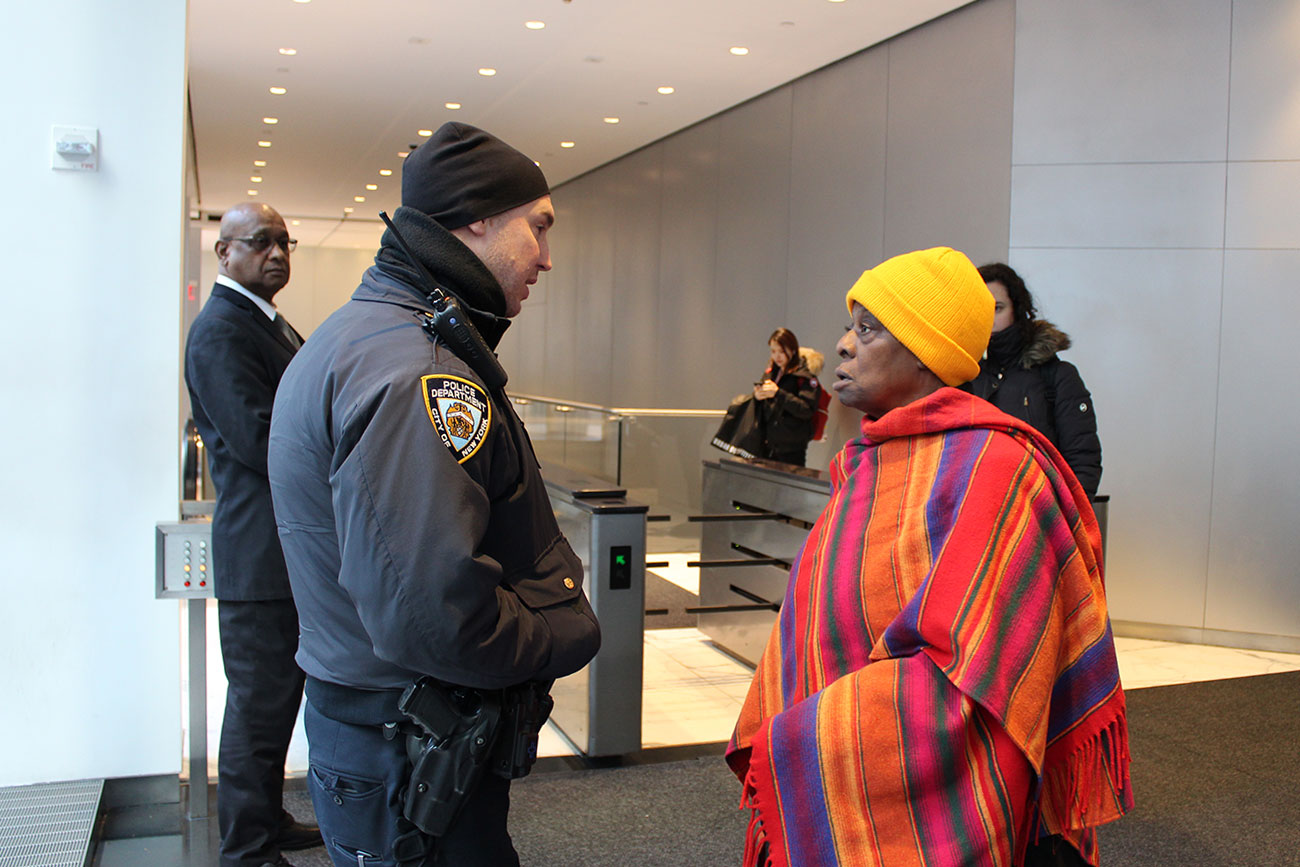 Carol Hemingway asking security if she could enter the building where the closed-door auction is being held. Rachel Ramirez / Grist

Though details are still scarce, it looks like Philly Thrive’s members may have gotten their way. According to court documents filed on Wednesday, Philadelphia Energy Solutions has agreed to sell its refinery complex for $240 million to Hilco Redevelopment Partners, a Chicago-based real estate company that has a history of acquiring defunct fossil fuel infrastructure for redevelopment, often turning the sites into logistics centers. Although the company’s plans for the site have not yet been disclosed, a Philadelphia city official who attended the auction told the Philadelphia Inquirer on Wednesday that Hilco does not intend to reopen the refinery.

When rumors emerged on Tuesday that Hilco was the buyer, Alexa Ross, one of the founders of Philly Thrive, said the group was “cautiously pleased” that it wasn’t a fossil fuel company but still had many questions about Hilco’s plans. “We want Hilco to know for a fact that leasing out land to operate the refinery or other polluting industries is not going to fly with us, and we’re going to keep up the same level of opposition to any kind of plans to lease with polluting companies,” Ross told Grist on Tuesday. 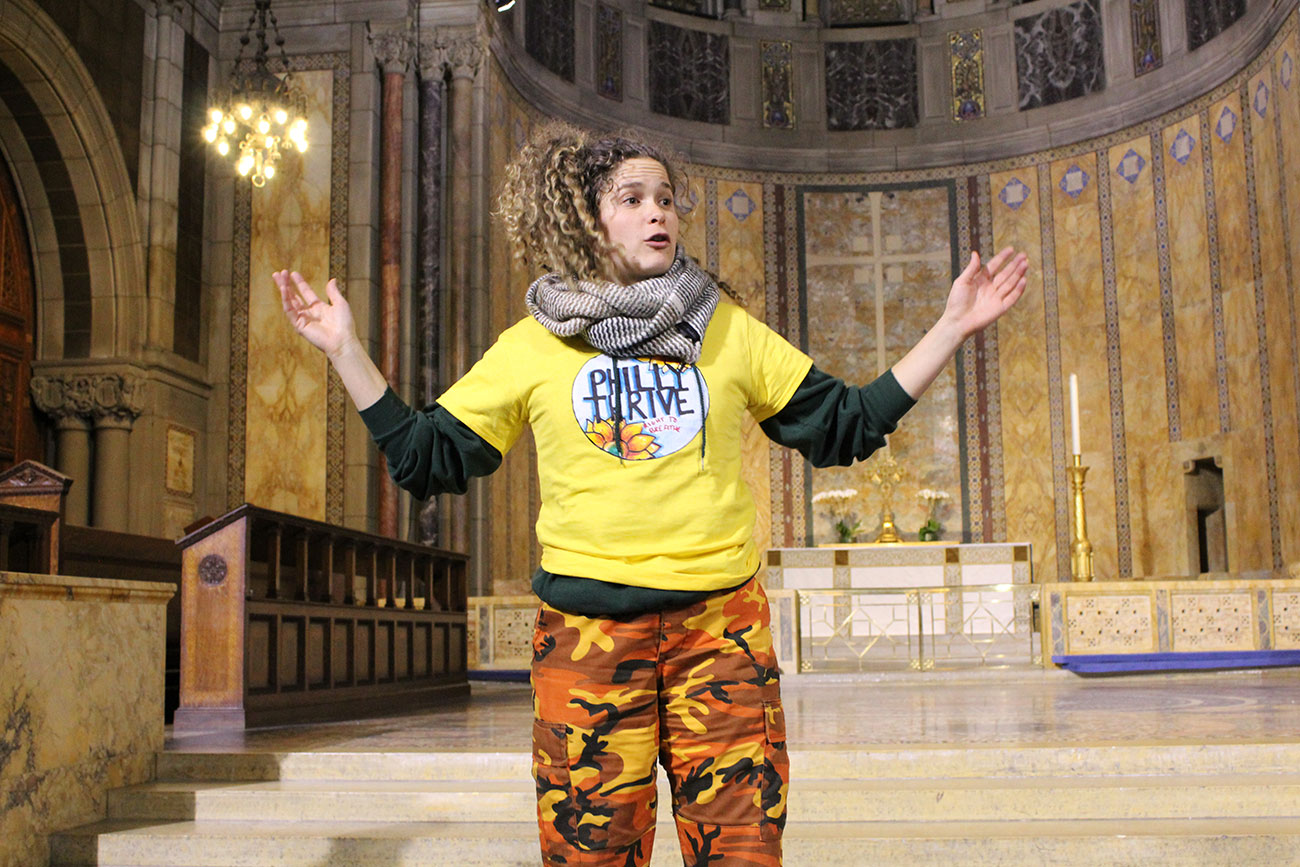 Recent projects by Hilco offer insight into what that fight might look like. In 2017, the company purchased a retired coal-fired power plant in Little Village, a neighborhood on the west side of Chicago, with plans to turn it into a million-square-foot warehouse and distribution center.

The coal plant closed after it could not afford upgrades to meet federal air quality standards and under mounting pressure from grassroots groups concerned about air pollution. That’s not so different from the situation in Philadelphia. But now, those same groups are worried that Hilco’s Chicago warehouse will bring more diesel trucks to the area, replacing one major polluter with many smaller sources of pollution. Hilco CEO Roberto Perez told Block Club Chicago that the company would build electric vehicle charging stations at the development and encourage prospective tenants to use electric trucks but said Hilco ultimately doesn’t have control over tenant operations.

The Chicago project also illuminates how long it might be before any development on the site in Philadelphia is up and running. Hilco initially expected the development to be ready to lease in early 2020, but now, two years after the sale was approved, they are still in the demolition phase. 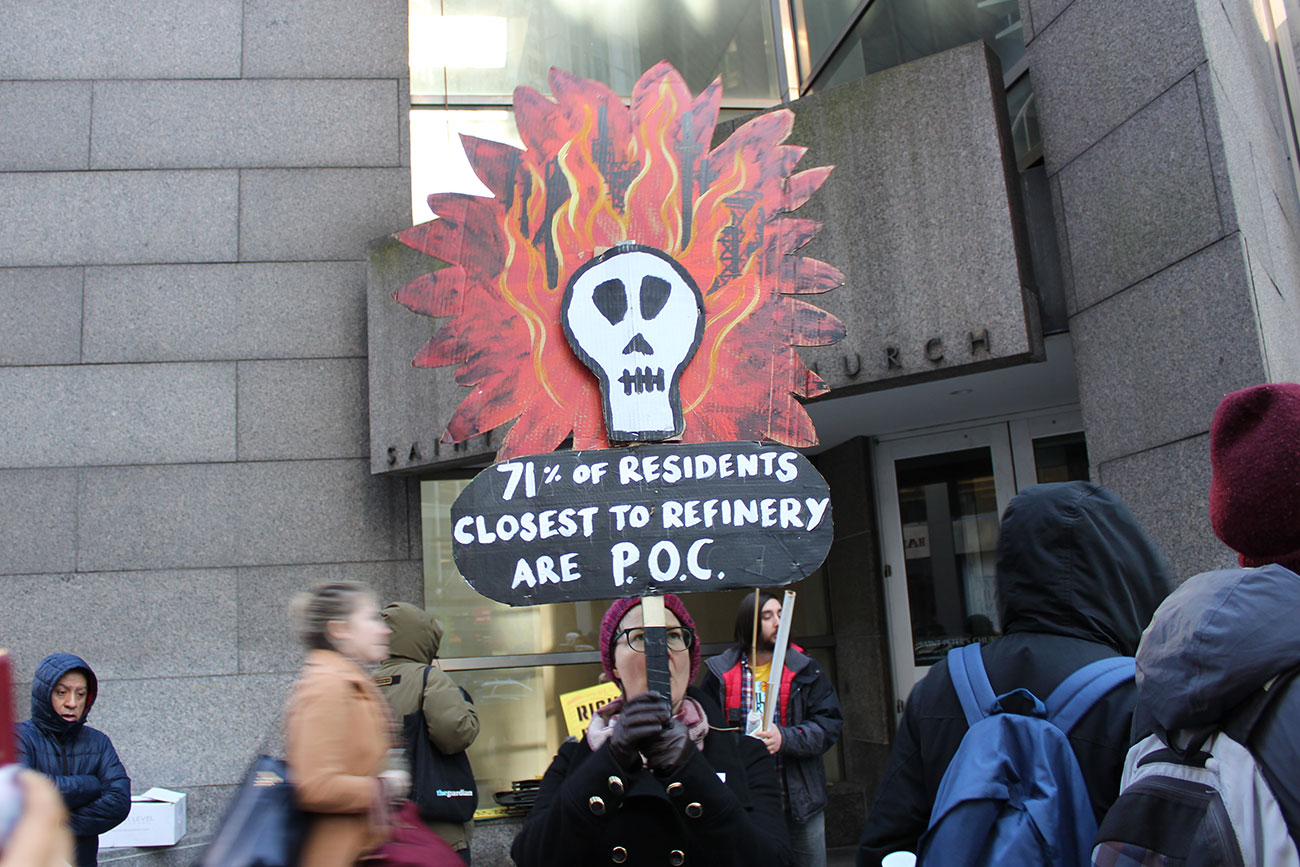 The Philadelphia refinery is laden with more than 150 years of contamination, and a complex web of players are involved in the remediation process.

Sunoco, an earlier owner of the refinery, is responsible for cleaning up hazardous waste accumulated on the site through 2012, and that clean-up process is ongoing. Through its purchase agreement, PES became responsible for any new contamination to the site after 2012, and will now pass that responsibility on to Hilco under the terms of the sale. But the remediation process is further complicated by a potential land use change under Hilco’s ownership. Under Pennsylvania’s Land Recycling and Environmental Remediation Standards Act, Sunoco was responsible for restoring the site to a standard appropriate for an oil refinery. If Hilco decides to redevelop the land for a different use, which seems likely, the company may need to remediate the site to a higher standard.

Despite the complicated nature of the cleanup, there are signs the company intends to turn the site around quickly. Brian Abernathy, the city of Philadelphia’s managing director, who attended the auction on Friday, told the Philadelphia Inquirer that Hilco’s timeline is aggressive, and that the company has already been in talks with Sunoco, the EPA, and the Pennsylvania Department of Environmental Protection. He said the company planned to redevelop the property in phases.

In a press release issued Wednesday, Philly Thrive stated that its members will continue raising their voices as the sale is finalized. The group provided an initial list of requests for Hilco, including barring any new refining operations on the site, involving the public in plans for redevelopment, and setting aside union jobs for folks in surrounding neighborhoods like Grays Ferry.

“Good jobs for young people in Grays Ferry would change lives,” former refinery worker and Philly Thrive member Rodney Ray said in the statement. “Let’s get some apprenticeship programs started. I know there will be less violence and less crime if people have the option to make a decent paycheck. That’s what I want for my community: the right to breathe clean air and good jobs.” 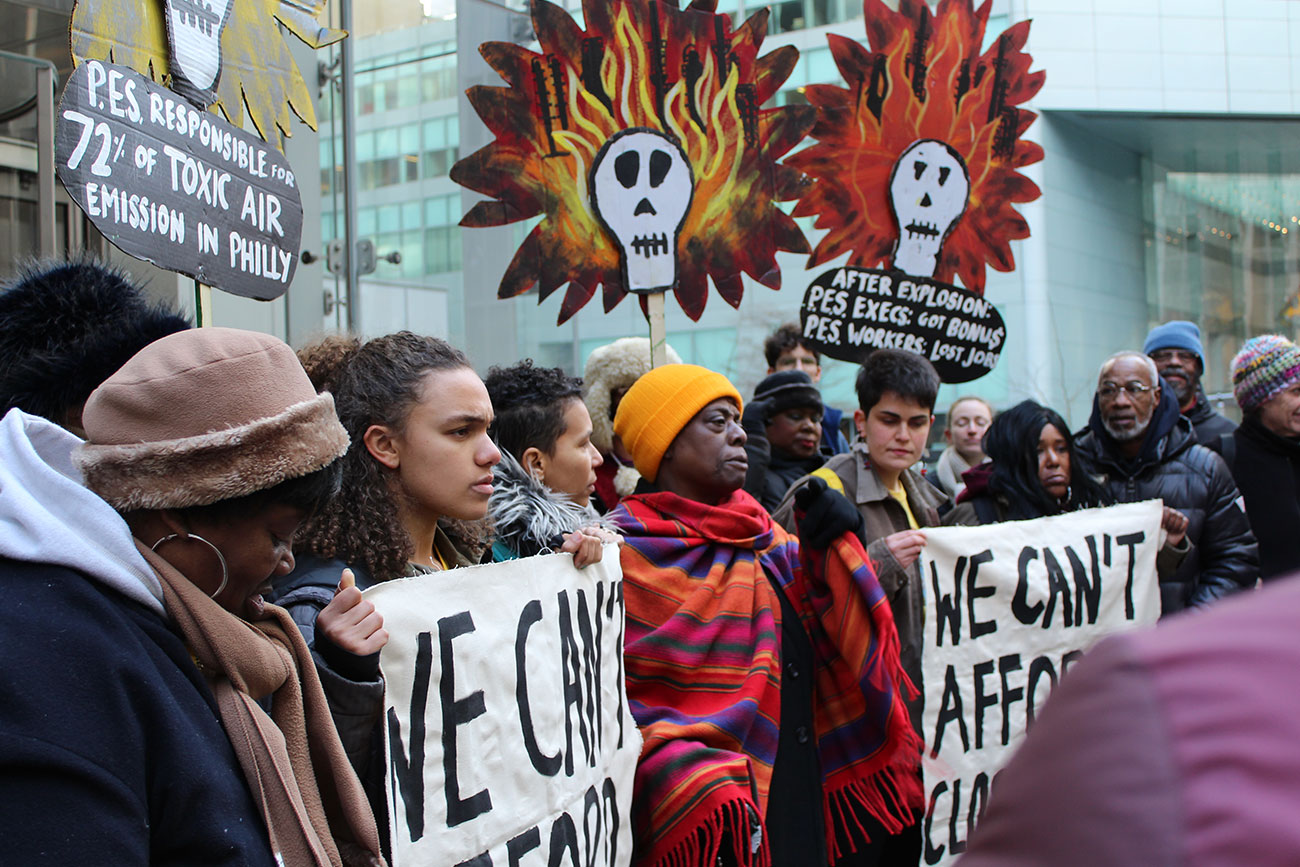 As Philly Thrive members wrestle with what the sale will mean for their community and health, former employees of the refinery have also been left hanging. Prior to the explosion and closure, the United Steelworkers Union had more than 600 members employed at the refinery.

“The nail’s probably in the coffin for the refinery,” Ryan O’Callaghan, the president of the USW Local 10-1, told the Inquirer. “We’re waiting to see what Hilco’s plans are.”

While the prospect of a deal with USW seems unlikely, the development is sure to bring new jobs to the area. In 2012, the parent company of Hilco Redevelopment Partners bought the Sparrows Point steel mill near Baltimore, Maryland, and began transforming it into “Tradepoint Atlantic,” a logistics center. The 3,100-acre site now houses operations for companies like Amazon and FedEx, as well as a 100,000-square-foot indoor farm, and a total of 10,000 new jobs are expected to be created on the site by 2025.

The Philadelphia sale is still contingent on approval by PES’s creditors and U.S. Bankruptcy Court Judge Kevin Gross. A confirmation hearing is scheduled for February 6th. Philly Thrive — in collaboration with Youth Climate Strike leaders — is mobilizing for another rally at the refinery on Saturday to emphasize their demands ahead of the bankruptcy hearing.

Philly Thrive “has been a part of creating this wave against fossil fuels,” said Ross. “We’re going to see it all the way to the end until healthy land use is occurring over there and residents are really at the center of final decisions and negotiations of how that business is going to operate.”

What’s the most ethical way to store leftovers?