Environmental justice work will need to change in critical ways as Donald Trump ascends to the White House, but not in all ways, says Miya Yoshitani, executive director of the Asian Pacific Environmental Network (APEN). On-the-ground organizing around community members’ local concerns will still be the core.

Here, Yoshitani chats about APEN’s work and what inspires her as she looks to the future.

Q. You started out as a youth organizer for APEN in the 1990s, working with Laotian refugees in Richmond, California. And in the years since, you’ve had some amazing victories — stopping the expansion of a Chevron oil refinery, for example.

A. APEN is on the map for some of our big wins, like the Chevron campaign. But those wins rest on the shoulders of a couple of decades of organizing and trust-building and fighting for the needs of the community on a day-to-day basis.

Our first campaign was for a multilingual emergency warning system, not just for the Laotian community but for all the immigrant and refugee groups in the county who were only getting their warning calls in English. That was a huge problem, because of the explosions and fires and accidents that happen on a regular basis around the refinery. It could be the difference between life and death.

We also did education work to inform the immigrant community about the health impacts of subsistence fishing in the Bay, and about lead in dishware. We had a community garden, where seniors would come and garden and interact with the young people in our youth program, teaching them about the herbs and vegetables they had brought over from their home countries.

Environmental justice is really all about listening to the community, making sure that they have a voice on the things that are most important to them. Doing that sometimes helps you build power and improve quality of life. It can take time. But there are just no shortcuts to building power.

Q. Given that your work is deeply rooted in that community, what difference does it make — if any — that we’re having this regime change in Washington?

A. In many ways, our work doesn’t change that much. We will continue to do the base-building, relationship-building, trust-building organizing work that’s connected to the solutions communities really need and hope for. And we will continue to connect that organizing work to real policy change at local and regional and state and national levels, too.

But absolutely there are impacts and changes given the new administration. The trajectory that we started — building power on the progressive left with people of color and low-income communities in leadership — has to accelerate.

California is a leader in demonstrating an equitable approach to climate policy. We’ve been able to win policies that get people jobs and bring wealth into the community and clean the air for our kids and offer economic and political and social opportunities. Being able to move that agenda faster and to model it for other states is really critical. California can point the country toward the future — not just in policy but in politics and power. That’s exactly where our state needs to be, and organizations like APEN and our communities have to help guide that and lead that.

On a practical level, too, our state has some of the highest populations of people who would be impacted by what the Trump administration promises to do — immigrant and refugee communities, Muslim communities, communities of color. California has to stand up really strongly and powerfully to defend the interests of our residents.

Q. And you’re gearing up to do so?

A. Yes. It’s a shift for APEN, preparing for this defensive action. In the last few years, we’ve been in a leadership role; our members have crafted some of the state’s most important policy initiatives, especially around climate. But our communities are also among the most vulnerable to the attacks of the next administration.

Our communities hear the messaging coming from Trump and his new Cabinet — that they don’t belong, they are the “other” and not part of the project of building the American Dream. Taking a stand is how our communities assert their belonging, their willingness to fight for their rightful role in shaping the future that their kids are going to live in.

Q. I know that APEN and its sister organization, APEN Action, have been working to cultivate electoral power in Richmond — supporting progressive candidates and changing the makeup of the city council. Does that work seem more important now?

A. Yes, that work has greater significance not just for APEN but for other communities that are at this intersection of poverty and pollution. Exerting electoral power in combination with organizing work is the formula we need to invest in.

A priority right now is to make sure that we’re balancing out the growth in electoral work with a growth in the organizing work because those two have to grow together. They’re two sides of the same coin; we need both to get out of the triple crisis facing our economy, our democracy, and our environment. 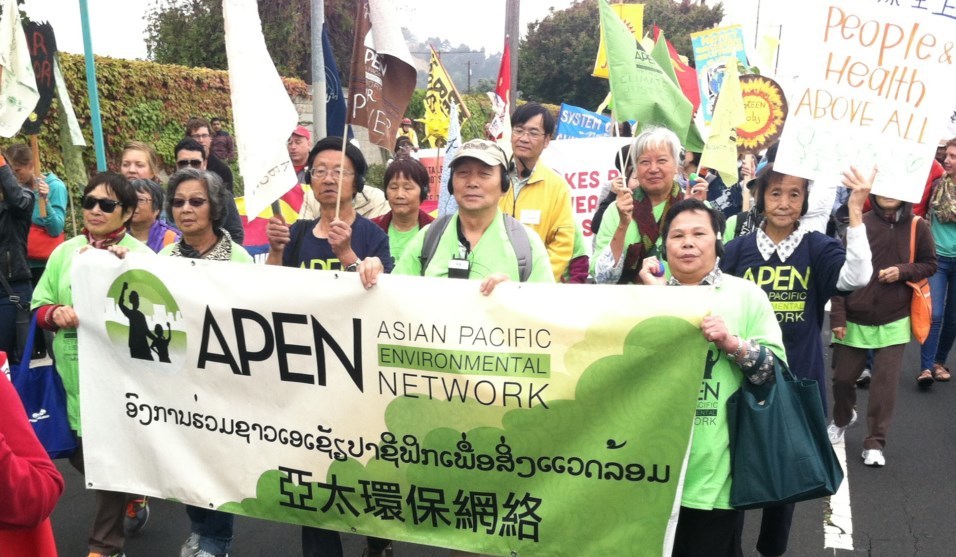 Q. You’re not just siding against stuff — like the Chevron expansion — but also fighting for a positive vision of the Just Transition away from a fossil fuel­–based economy.

A. Yeah. APEN and its allies have been innovating and experimenting with new models — like Cooperation Richmond, which builds local wealth by incubating worker- and community-owned co-ops; and locally owned community-run renewable energy systems; and new food systems that are democratically run and serve the interests of local communities. Building these models is part of how we turn the tables and win. It becomes a tool for getting rid of the worst parts of the dirty-energy economy, and replacing them as we go.

What our communities need so intensely right now are real examples of a vision for a new culture and society, right in their own neighborhoods. They need to be able to touch and feel and experience them and also experience building them as participants in our democracy.

Building new models is part of staying hopeful about our ability to control our own destiny and fight for alternatives to the things that are making people feel so vulnerable and undervalued and unable to meet their family’s basic needs.

Q. So, how are you doing post-election? What gets you out of bed in the morning?

A. It’s a hard question because it makes me a little emotional. Of course, I’m worried. I think everyone has this moment where they wake up in the morning and for just a split second you don’t actually remember what’s happening, and then you remember all over again.

Every morning, there’s this assault from the news, and another very specific reason to be afraid. Is it our schools? Our homes? Our jobs? Our families being torn apart? Will our family members or our community members be picked up off the street, rounded up? Nuclear war? Climate chaos? Every day, there’s a new aspect of that, and it feels so complete that it can be a little overwhelming.

But the thing that makes me emotional is how much people are already demonstrating their ability to be resolute and strong and creative and brilliant in these moments.

For groups like APEN and our community members, we draw on the fact that we have been through hard times before and those are the foundations of why we do the organizing work that we do. We’re not alone: Our staff, our members, our leaders, our neighbors take care of each other and look out for one another, and there’s been an outward expression and articulation of that commitment.

There’s just a very strong chorus, a beautiful song, and people are taking it up in a renewed and powerful way. I have hope that we’re going to be able to get through to the heart of what’s causing the climate crisis because we’re now going to be willing to address inequality in a more systematic and deep way, and that’s because of the moment that we’re in.

There is a deeper desire than I’ve ever seen to address the problem at its source and to get to the roots of why we’re here in this moment. People are able to get out of their silos now and say, “Okay, I thought that I was going to be able to just go to D.C. and lobby my way out of this, but now I realize that we depend on each other and there’s no way that we get a holistic solution to this crisis without a holistic approach.” And that includes putting people back at the center. That’s our pathway, our only pathway.

This article was produced by the Island Press Urban Resilience Project, with support from the Kresge Foundation and the JPB Foundation.