Aaron Sorkin tackles climate change on "The Newsroom" and ... oy 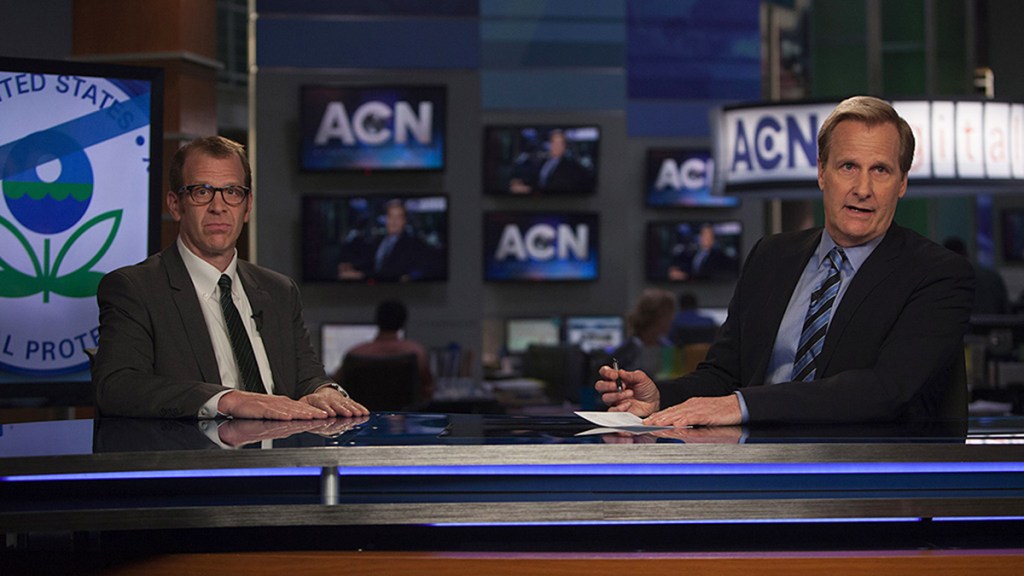 Aaron Sorkin tackles climate change on “The Newsroom” and … oy

Like many people I know, I have a bit of a love/hate relationship with writer Aaron Sorkin. On the one hand, he created and wrote The West Wing, which remains one of the best network dramas ever. I recently watched almost the entire first season on an airplane — it holds up! Yes, the view of politics was naive, which arguably set Americans up for massive disillusionment in the wake of Obama’s election. And yes, when it strayed too close to certain areas of policy (especially anything fiscal, having to do with the budget), it descended into glib, goofy conventional wisdom. But its batting average was remarkably high. And then of course there was Sorkin’s late, lamented Sports Night, which was also great.

The Newsroom, unfortunately, has backgrounded Sorkin’s strengths — smart, snappy, rapid-fire dialogue, mainly — and foregrounded his weaknesses: his patriarchal fondness for Great (White) Men, his nostalgia and naivety regarding institutions, his unbearable preachiness, and his view of women as twitterpated ninnies (who are nonetheless hyper-competent at work).

So it was with some trepidation that I realized last week, early in the episode, that The Newsroom was going to tackle climate change. Sure enough, it was … not great.

The storyline is as follows: A producer for ACN, the fictional news network on the show, overhears an EPA employee on a train disparaging the president. Afraid the producer will run that story, he offers her another scoop instead: a week-early look at a supposedly blockbuster report revealing that atmospheric CO2 levels have exceeded 400 parts per million.

An embargoed report? If those were news scoops, I’d have a Pulitzer by now.

Also? The CO2 measurements in question, arrayed along the Keeling Curve, are publicly available. They’ve been going steadily up all century. Crossing the 400ppm mark was perfectly predictable for a long, long time now. A news producer who buys this as a revelation is a poor news producer indeed.

But anyway. They bring the assistant EPA administrator on the show for an interview about it. Witness:

OK, so, at the level of specific accuracy, this actually holds up pretty well, as James West’s excellent fact-check shows. There’s some poetic license in the rhetoric, but the science is legit.

The problem is not the notes, it’s the music.

Nobody watching prime-time TV is going to absorb statistics or factoids. What they’ll take away from this is that some quirky government scientist thinks we’re doomed and that seasoned news professionals think he’s a quack. (They joke about it later in the episode.)

Even if we take the ranting EPA guy seriously, it makes no sense. What is a “catastrophic failure of the planet”? We’ve had deadly storms, heat waves, and wildfires for centuries. We’ll have more in coming decades. Lots of people have died from them throughout history; lots more will in coming decades. There is no line you cross where bad weather becomes a “failure of the planet,” such that we’ll be able to identify the first person to die from such a failure. It’s not going to be that dramatic. Making it sound like there’s going to be some sudden break only makes people blind to the incremental changes already underway. It makes them think climate change is something that might happen, something we might or might not avoid, rather than something that’s already underway and has to be managed.

Also: There’s nothing magic about a concentration of 400ppm of CO2 in the atmosphere, or 2 degrees temperature rise, or any other particular milestone. The world won’t look any different the day after we cross those thresholds than it will the day before. We actually crossed 400ppm once already. (We’ve bounced back to just under.) Did you notice?

Saying that if we’d acted 20 years ago we could have avoided doom, but now there’s no way we’ll survive, is profoundly, profoundly daft, both substantively and psychologically. Yes, we could have done more, less expensively, if we’d started 20 years ago. By the same token, there’s more we can do, less expensively, today than there will be 20 years from now. A global average temperature rise of 3 degrees will be much uglier than 2 degrees; 4 degrees will be worse than 3; 5 worse than 4; and so on forever.

The choice of whether to act, or how vigorously to act, will always be with us. This is a problem we will always have to manage. There is no “too late” or “the house has already burned down.”

I blame enviros for some of this. With all their Game Over talk, they’ve helped create the impression that we only have one chance to address climate change.

But really, Sorkin wouldn’t have to read very deeply to get past this way of seeing things. I get that he’s trying to lend the issue a sense of impact. But what we know about climate change, we’ve known for a long time. The science is pretty robust; it’s going to get better over time, but it’s highly unlikely that there will be any great revelations that stun a network TV audience. It’s just drip, drip, drip. A slow boil.

If TV writers like Sorkin — or other artists — want to address the issue, they need to find clever ways to address humanity’s difficulty with slow-moving, incremental problems, instead of trying to make climate change into the equivalent of a meteor strike. It’s dramatic, but it’s not dramatic like that.