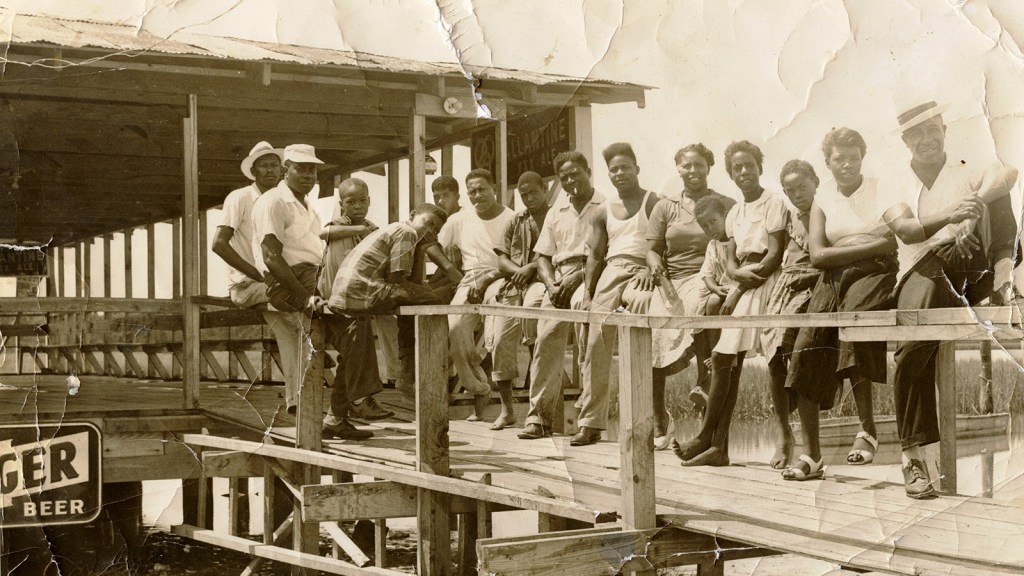 On this day, 70 years ago, the U.S. military descended onto the beaches of Normandy, France, to fight for justice and democracy. We call it “D-Day.” It marked the beginning of the end of one of the world’s worst wars. Black soldiers fought alongside white soldiers to help bring down Hitler’s army. President Barack Obama, speaking at a D-Day commemoration at the Normandy American Cemetery and Memorial at Omaha Beach today, said this:

By the end of that longest day, this beach had been fought, lost, refought and won — a piece of Europe once again liberated and free. … When the war was won, we claimed no spoils of victory — we helped Europe rebuild. We claimed no land other than the earth where we bury those who gave their lives under our flag, and where we station those who still serve under it. But America’s claim — our commitment — to liberty; to equality; to freedom; to the inherent dignity of every human being — that claim is written in blood on these beaches, and it will endure for eternity.

Obama’s lofty rhetoric contrasts awkwardly, however, with the reality on beaches back home in the U.S. — both then and now. When the war ended, our soldiers returned to beaches that remained racially segregated, along with many other public spaces, and where justice and democracy had been left undone. I wrote about this recently in a post about coastal capitalism and coastal racism, and how those combined to turn beaches into places of danger rather than leisure in the minds of many African Americans. These forces have also left our coasts vulnerable to climate change and rising seas. It’s proper to commemorate those who spilled blood on the beaches of Normandy for democracy, but we can’t forget that it meant little for black people who, after the war, still could not access beaches and many other public areas, a problem that lingers today. Consider what happened in Myrtle Beach, S.C., just a week ago. Gov. Nikki Haley (R) called to shut down the Atlantic Beach Bikefest, known more affectionately as Black Bike Week for the droves of African-American motorcyclists drawn there annually over the Memorial Day holiday. This year, three people were killed at a motel near Bike Week festivities, and Haley believes the black biker gathering is collectively responsible. “It is time for that Bikefest to come to an end,” she said. Here’s more from The State:

“There are no revenues worth the bad press that we got this past weekend. There are no revenues worth the lack of companies that will come to this area because of what happened this weekend. … There’s nothing worse that the governor wants to see [than] Myrtle Beach on the front page of USA Today in a negative light. In a time when we are trying to improve the tourism in South Carolina, trying to bring jobs to South Carolina, trying to show everybody why Horry County is such a great place to live, work, vacation and raise a family.”

The only costs that Haley is concerned with are economic. She ignores the blow to democracy, and she either ignores or doesn’t know that for decades South Carolina was the one of the worst places for African Americans to live, or vacation at the beach. In his book, The Land Was Ours: African American Beaches from Jim Crow to the Sunbelt South, Andrew Kahrl recounts how the city of Charleston created the “Riverside Beach” on the Wando River for black residents. This was in response to African Americans who complained to the city that they had nowhere to swim. Meanwhile, the city dumped sewage “along with the wastes of the city’s industries and manufacturing plants” on the other side of Wando, right across from Riverside where black kids swam. The other place for African Americans to swim was a Charleston dug-out that the residents unflatteringly called the “Horse’s Hole” — the source of many drowning deaths of black kids. Similar drownings happened in cities like D.C. and New Orleans due to racist exclusionary policies. Along South Carolina’s coast, black farm workers and truckers who owned land along the beaches at the turn of the 20th century were railroaded off their property by mid-century to make room for emerging beach resorts like Hilton Head. Writes Kahrl: “Developers encountered African American families like the descendants of Matthew and Teena Jones, whose ties to the land extended back to the dawn of freedom and for whom possession of land had come to shape and reflect the very meaning of freedom.” The Joneses and many other black families were pushed out of their land through “forced partition sales” and “the sheer mendacity and duplicity of speculators, lawyers, and developers engaged in the liquidation of heirs’ properties.” By the 1990s, at the advent of Black Bike Week, black South Carolinians had faced so much discrimination, hostile police treatment, and businesses refusing service in Myrtle Beach that the NAACP had to file several federal lawsuits. Despite successfully settling some of those lawsuits, the state’s NAACP says businesses continue to refuse to serve African Americans, whether on bikes or not. The blogger Grizzard details even more accounts of racial injustice in Myrtle Beach over at Daily Kos. He also puts the annual biker gathering in the context of the history of Myrtle Beach, where, in the 1960s, African Americans were relegated exclusively to a tiny, isolated nook called “Black Pearl,” so whites wouldn’t have to swim with them. “Black Bike Week, it seems, is the ultimate in black rebellion,” Grizzard writes, “a direct affront to the institution of white power, where stories-high beach houses rise from the sand as a veritable confirmation of economic power and status.” As for the hotel murders that set Haley off? Terrible, but no more so than violent clashes and deaths that have occurred at mostly white gatherings, like the tailgate parties before University of South Carolina football games, writes Grizzard. But you won’t hear her calling for an end to college football. Even couching this in economic terms has a racial context when considering that the beach economy was built at the expense of black suffering through land loss — which today yields social and environmental consequences. Again Kahrl on the mic:

[The] embrace of capital-intensive coastal development did not entail a loosening of plantation power, which continued to dominate the state’s overall political economy into the 1940s. It did, however, lay the groundwork for what historian James Cobb called the ‘selling of the South’ in post-World War II America, accomplished in large measure through changes in tax codes favorable to corporations and lax environmental regulations that not only allowed industries to pollute at will but also encouraged developers to turn fragile coastal ecosystems into valuable real estate.

Speaking from Omaha Beach today, President Obama said, “This was democracy’s beachhead.” But it couldn’t have been. Not when at the same time black people were being swept off the coasts here in America.