For two decades, Florence Williams could sit on her porch at night and watch the alpenglow on the Rocky Mountains. Then she moved from remote Colorado to Washington, D.C., and started noticing the changes.

“I felt disoriented, overwhelmed, depressed,” she writes in her recent book, The Nature Fix. “My mind had trouble focusing. I couldn’t finish thoughts … and I wasn’t keen to get out of bed.”

Williams was suffering, she says, from nature withdrawal. She spent the next three years digging into the science of how nature works on our brains. In short, it makes us more relaxed, more creative, and more socially connected. She traveled to Japan and Finland, the deserts of Utah and the urban forests of Singapore, to study just how much we stand to gain by bring nature back into our lives. 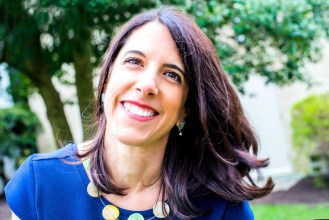 At a time when more than half of all humans live in cities, the influence of the natural world is at a low ebb, while our understanding of its importance keeps growing. In a recent visit to the Grist offices, Williams talked about how writing this book led her to appreciate the role nature can play in our personal lives, not to mention our politics. (This conversation has been edited and condensed for clarity.)

Q. So many writers and philosophers and scientists have evangelized for nature, but we still don’t seek it out as much as we should. Why are we so bad at remembering that we actually like going outside?

Q. Do people in other countries have a different relationship to nature?

A. I spent a lot of time in Northern Europe, especially Scandinavia. I think in a lot of those places, the stress aspect is at the forefront. Scientists and the medical community are working really hard on preventative medicine: how to prevent depression and suicide, obesity, chronic disease. Well-being, especially mental health, is the priority for them.

Whereas, in the United States, I think there’s more of an interest in the opposite: Be more productive, more efficient, more creative.

Q. The book opens with you in a national park when your phone beeps — not exactly a scene out of Walden Pond. Why aren’t you telling people to ditch their devices like a nature purist would?

A. I am a member of Generation X, so I do like my technology. And I’m a realist: I’m not going to tell people to throw their phones over a waterfall.

Cellphones enable a whole new way to gather data. I open The Nature Fix talking about an app called Mappiness; it’s part of a big data grab by a British economist to get millions of points of data about where people are during their days and how they feel about where they are.

It was a revealing exercise for me. I thought I got outside a fair amount. But my app only found me outside 7 percent of the time. It turns out that’s about the national average — we tend to be outside for about 5 percent of our day. And that includes, like, walking to the bus stop. It’s not quality time outside.

So it really brought home this epic dislocation we’re living in: We don’t recognize how happy nature makes us. We think shopping makes us happy, or streaming Netflix, eating ice cream — and those things do make us happy, but we get a tremendous boost from being outside in a natural environment.

Q. Some of the people you write about are studying how to get the benefits of nature — strapping on a virtual reality headset or painting everything green — without actually going into nature. Do you find that troubling?

A. I understand the drive to provide nature to people who can’t get to it on their own. However, I think if we make it too easy to never leave your couch, then that’s a problem. All of our senses interact with nature. There’s no way that virtual reality is, at this point, ticking all the boxes.

There seems to be a dose curve for nature: For the most part, the more time you spend in a nature environment, the better you’re going to feel.

If it’s a potted plant and that’s all you can get from your desk — great. Look at it every once in a while, look at the view out your window. But if you can actually sit outside in your backyard and hear the birdsong and feel the grass in your toes — and occasionally go off into the deep wilderness — I think some really profound things can start to happen to your brain, and to your worldview.

Q. In Washington, D.C., your home base, tree cover has declined from roughly 50 percent of the city in 1950 to 36 percent today. Can we blame any of the problems in our nation’s capital on the lack of trees?

A. Yeah, I want to start a campaign to bring potted plants into Congress. [laughs]

I think all those congressional leaders need to go on a little field trip. I once interviewed the Obama White House Chief of Staff, Dennis McDonaugh, who said some of his most productive meetings with Republican leaders took place on bike rides in Virginia. So there’s definitely something to the social connections that get forged when you’re outside and participating in a common endeavor.

I was lucky to grow up close to Central Park, designed by Frederick Law Olmstead. People understand now that he was sort of a genius when it came to spatial organization: where to put trees and paths and bridges and boulders. What’s less known about him is how prescient he was in understanding the connections between green space and democracy. He really believed that parks were necessary for the mental health of everyone in cities, all walks of life, and that parks could provide this great experimental space for the melting pot that we are.

He also advocated National Parks and public lands for the same reasons. So I think it’s particularly poignant and timely that now, when democracy feels threatened, public lands are also perhaps threatened.

Q. How can we keep up our time in nature without moving to an isolated, sprawling, suburb?

A. I wanted to visit the future, so I went to Singapore. That’s the third densest country on the planet. We’re already at the halfway point of more people living in cities than not living in them. Two billion more people will live in cities by 2030. And when you get to Singapore, it’s high rise upon high rise upon high rise. Yet, in the last 15 years, the green cover in Singapore has increased from 35 percent to 50 percent, despite two million more residents, because they have really prioritized integrating nature into the urban fabric.

The buildings there — and this is where you really need good planners and good architects — incorporate vertical gardens into residential towers, offices. I think our institutions need to take this on, especially schools. Where I live, only 10 percent of kids get the recommended recess time. Which is appalling, because we know that kids need this time to run around and have exploratory free play in order to just pay attention later in the day.

Kids in Finland, who have the highest test scores in the world, get 15 minutes of recess for every 45 minutes of class time. And the teachers are like, well, duh, of course we do that. Because otherwise the kids can’t pay attention and can’t sit still. Yet when you talk about why Finland has these test scores, that almost never gets raised.

We’re living in the largest mass migration in history, the movement to cities. At the same time, it’s the movement indoors — and that has these tremendous public health consequences that we’re just beginning to understand.

A. If you have kids, the most important thing you can do is get your kids outside often enough to develop their love for nature. You will be giving them a gift they will have their entire lives.

In terms of yourself, similar advice: Go outside more often than you think you want to! You will reap the rewards in increased mood, increased social connection in your relationships. But I wouldn’t beat yourself up if you can’t do it all the time. Just be open to understanding there are times in your life you might need this connection more than other times. I think that especially if you’re struggling with depression, or you’re struggling with grief, consider the natural world as one of your interventions.