Statement necklaces are so hot these days, but those giant neck shackles are nothing compared to these bad boys.

Posavec and Quick mapped three nonconsecutive weeks of unusual air-quality patterns onto flat plastic beads. Each bead represents an eight-hour period. The more pollution during that period, the larger and spikier the disc, and the more aware you are of how necklace touches your skin. The outlying data is particularly evocative: One of the necklaces has a big, prickly orange bead depicting the highest level of particulate matter during those few weeks, which took place on Guy Fawkes Night, a UK holiday during which celebrants light nighttime bonfires.

The designers also made three pairs of sunglasses, each with three lenses that represent different air pollutants in Sheffield. The lenses all have designs etched into them — the more prevalent the pollutant, the larger the design. Altogether, the lenses make the glasses pretty hard to see through, which is the point: Pollutants make the air hazy. 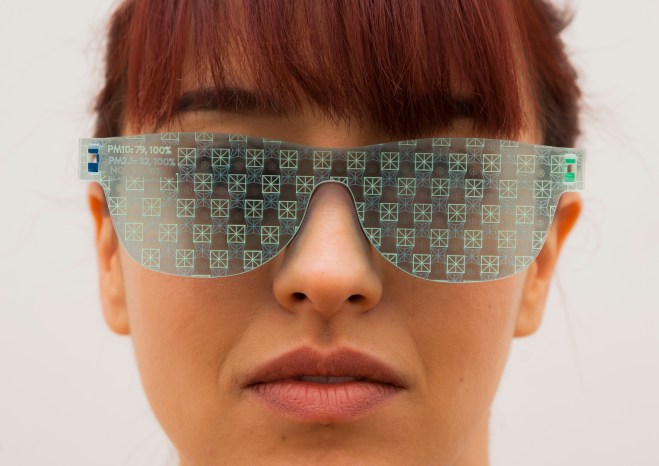 I never really knew what “statement necklaces” were supposed to be saying, but I’m pretty sure these accessories — called Touching Air and Seeing Air, respectively — are saying something more important. How about earrings that reflect noise pollution? Or toe rings that reflect soil toxicity? Maybe if we were all walking manifestations of the toxins in our environments, the world would be a cleaner place! Just kidding — that’ll never happen.