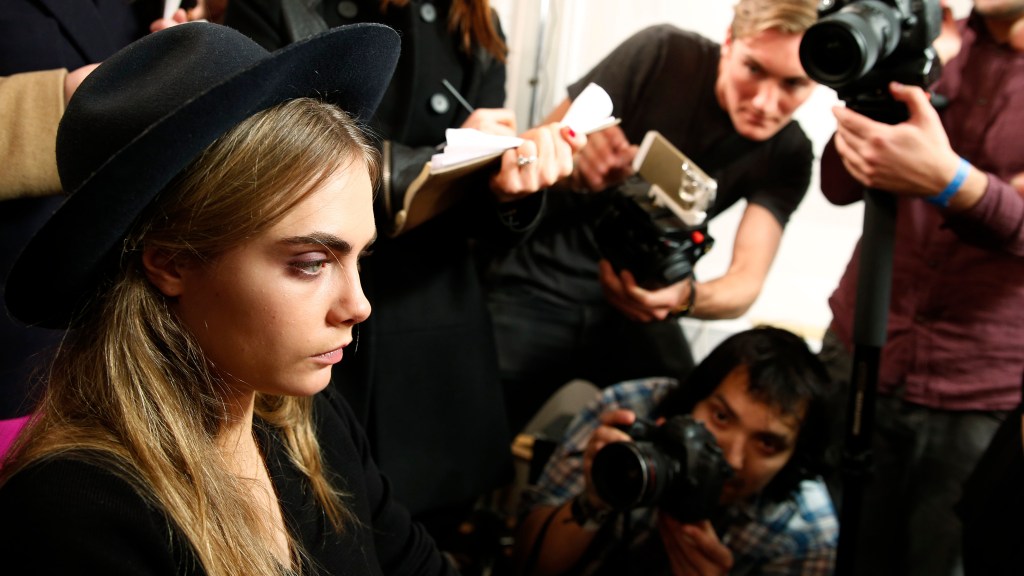 On a recent visit to the White House, famous person Cara Delevingne left a message for one of its would-be inhabitants on her Instagram.

Let's see how you feel about climate change in 10 years Mr Trump! It is painfully real. Also, can Donald Trump do this???? #itrumptrump #ichallengetrump #climatechangeexistsfool

“Let’s see how you feel about climate change in 10 years Mr Trump!” Delevingne captioned the photo, which showed the supermodel impersonating a crow (?) somewhere in the White House. “It is painfully real,” she continued.

Delevingne also included the hashtags “#itrumptrump,” “#ichallengetrump” and “#climatechangeexistsfool.” And for those of you who don’t speak hashtag, allow us to translate: “I challenge you, Mr. Trump, to accept that climate change is an ongoing and human-made phenomenon that will have disastrous consequences for all inhabitants of this fine planet. Also, you’re a fucking moron.”

The picture has received 1.1 million “likes.” For those of you who don’t speak Instragram, allow me to rephrase: 1.1. million people have signaled their approval of Delevingne’s message by double-tapping their smart phones. We can infer that they also think Donald Trump is a fucking moron.

While those of us here at Grist dot org are far too highbrow for such pedestrian tools as Instagram (ed. note: please follow us), the truly noteworthy part of this story isn’t a leggy 23-year-old’s social media presence: It’s the fact that we read about this on Teen Vogue. Yes, Teen Vogue — a magazine primarily about fall fashion and bad hair days — is now covering climate change to some extent.

Delevingne isn’t the first of the fashion community to give climate change a very social media-friendly shout-out: Cameron Russell, another Victoria’s Secret alum, has been working to bring models on board to raise climate change awareness.

Take hope, olds: If teens and tweens really do follow the lead of their Instagram heroes and start to give a shit about climate change, the world might not be quite so screwed after all.