Danish children learn about life and death through lion dissection 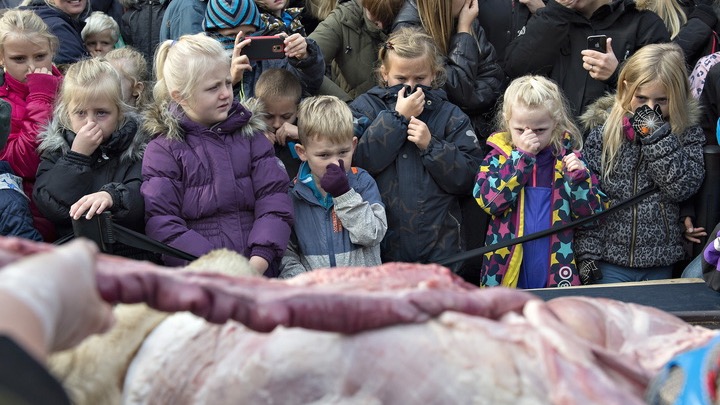 Danish children learn about life and death through lion dissection

Until today, the most peculiar thing I’d heard about Denmark was that parents leave their children to sleep outside in subzero temperatures — something that would get you arrested in the United States, if not put on a government watch list. But there’s something else Denmark does very differently when it comes to child-rearing: public dissections.

N0 — not dissecting the children! Come on! Two years ago, a zoo in Copenhagen decided to kill a healthy young giraffe that was deemed unfit for breeding. Afterward, the zoo held a dissection, invited the public to watch the process, and then fed Marius the giraffe to some nearby lions. The world hates little more than an animal meeting its untimely death, and an outpouring of outrage ensued.

“What the Copenhagen Zoo did had nothing to do with nature, or science, or animal husbandry, or education, or research,” wrote Denise Cummins in Psychology Today. “Its actions instead constituted blood sport for human entertainment.” She wasn’t alone: Jack Hanna said he was “astounded,” and a Guardian columnist wrote that the event was “inexcusable.”

In Denmark, however, these events are considered valuable education opportunities, and they’re also fairly commonplace. This weekend, the Odense Zoo on the island of Fyn hosted the public dissection of a lion. NPR reporter Sidsel Overgaard talked to some Danish parents to ascertain why, exactly, they’d bring their kids to such a demonstration:

Jan Pedersen brought his 7-year-old daughter, Anne-Dicte, to the dissection.

“It’s a natural part of living,” he said. “We’re eating meat almost every day and, I know, we don’t eat lion, but to see how animals look inside, that’s a part of growing up and getting wiser.”

“Danes are very, very honest with their children about life,” says [Jessica] Alexander, [American co-author of The Danish Way of Parenting: A Guide to Raising the Happiest Children in the World.]

“Maybe kids are going to come out of this and become animal activists and vegans,” she says. “We don’t know what kind of effect it’s going to have on them. But they’re going to be free to make up their own mind about it.”

It makes sense, but will public dissections catch on in the U.S.? Seems about as likely as leaving babies out in the snow.

Correction: The original headline of this story called the children Dutch instead of Danish. Grist regrets the error and has sentenced the author to a public panda dissection.