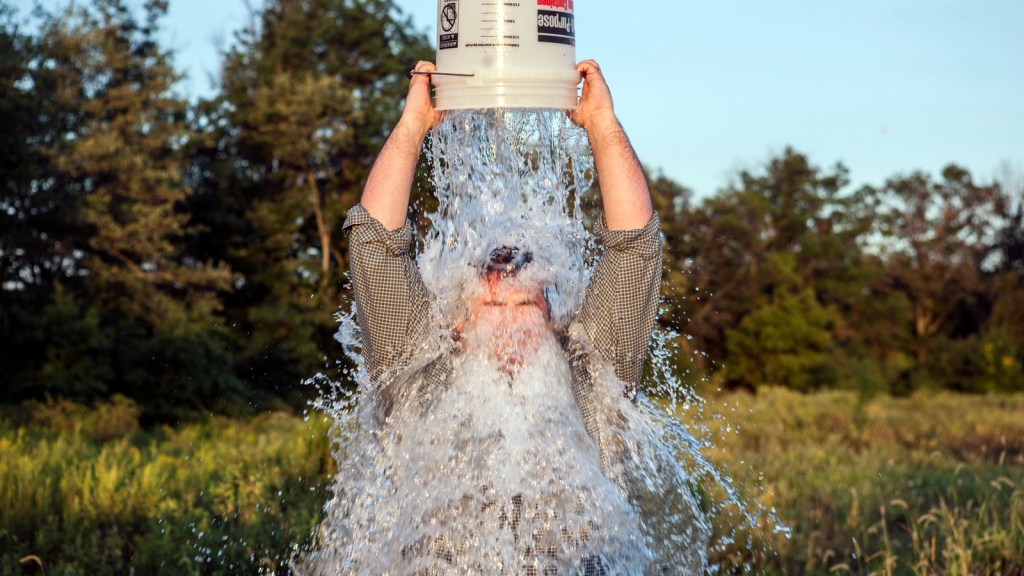 At a certain point last week the knowledge that people I knew were dousing themselves with buckets of ice water became inescapable.

Other things that have gone viral this summer include #yesallwomen, a Kickstarter for potato salad, and a donation fund for a police officer who shot and killed an unarmed teenager. How they’ve done this is mysterious — while there are entire ad agencies devoted to “viral advertising” and you can pay your way into the “trending” section of Twitter these days, all of the above seemed to spread without any Machiavellian strategy behind them.

What made the ice bucket challenge stick, when so many other fundraisers and attention-getters haven’t?

It doesn’t just work for Destiny’s Child! The fact that each person who posted an ice bucket video could call on three other people to take up the challenge turned it into, basically, a chain letter.

This is also the secret behind Mary Kay, Amway, and nearly every fundraising campaign on earth. We are social creatures, and we’re absolutely more likely to give to or volunteer for organizations that our friends are involved with already.

The fact that ice bucket challengers could challenge anyone — friend, foe or complete stranger — made it more amusing, but the way the phenomenon spread was through social networks. Facebook’s decision last December to set up video posts so that they played automatically made the whole social aspect of the ice bucket challenge even harder to ignore. Check Facebook and there it was in the background, everywhere — just as hard to ignore as those special people in your life when you encounter them in actual meatspace.

In general, fads with real sticking power (hula hooping, frisbee) don’t take much skill to master, while the ones that take real dedication (rollerblading, swing dancing) tend to flash and disappear.

There are very few actions that are more simple than dumping a bucket of ice water over your head. You don’t even have to hold your own bucket. If only the rest of life could be that easy.

In this sense, the ice bucket challenge has a lot in common with other ease-of-adoption do-gooder measures, like 350.org’s International Day of Climate Action (directions: Spell out “350” with something; take a picture of it) and Movember (directions: If you can, grow a mustache).

4) Allow room to get weird.

Part of the reason that the ice bucket challenge took off is that it’s already viral — people have been doing variants of this stunt for years, modifying it to suit their own purposes, before it acquired the perfect combination of qualities that made it go big.

Because it didn’t have a clear, set format, people improvised. Bill Gates designed an ice bucket dumping machine for his. Those concerned about drought turned it into the rice bucket challenge, the dirt bucket challenge, and so forth. Compare this to the very well-intentioned but also very rule-bound video campaign for Al Gore’s Climate Reality Project. I am sure Al’s lawyers made the Climate Reality Project put all that boilerplate in there, but still — it’s like reading a rental car agreement.

Earlier this month, the ALS Foundation moved to copyright the Ice Bucket Challenge. Whether or not it would have been able to is debatable, but it made the right choice when it ultimately withdrew the effort.  If there’s one thing a virus needs to survive, it’s the ability to keep changing.