If Game of Thrones' murderous ice zombies don't make you care about climate change, we give up 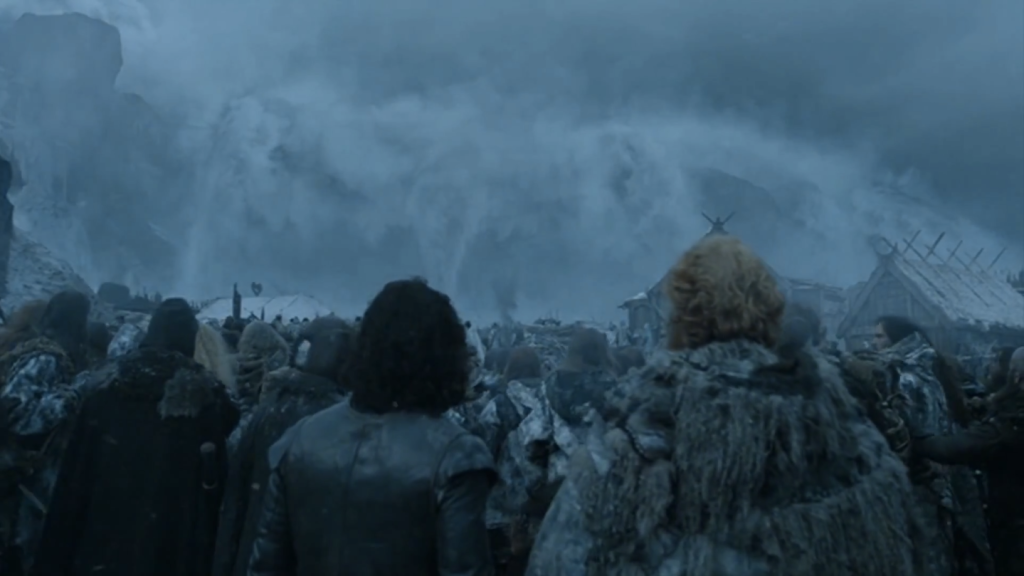 If Game of Thrones’ murderous ice zombies don’t make you care about climate change, we give up

Here at Grist HQ, we’ve been chatting about the climate change parables in HBO’s Game of Thrones for quite some time. But the metaphors in last night’s episode, “Hardhome,” were so blatant that we couldn’t not talk about them here. Join us!

Eve: Lots and lots of people spend lots and lots of time talking about how we can get Earth-residents (i.e. humans) to care about climate change. I would like to put forward a very effective approach: Create an army of ice zombies (which has already begun, FWIW). They make a strong argument!

Ted: Boy, do they. All your climate models and 2C and 4C and sea-level rise? That’s all well and good, but “an undead army is KILLING EVERYBODY” seems a pretty effective way to get folks on board with some serious climate action — or at least to consider getting a Nest.

Eve: For those of you who have been following Game of Thrones (and if you haven’t, you should probably stop reading), you must have noted that there has been substantial screen time attributed to things that are not The Army of Blue-Eyed Homicidal Skeletons That Will End the Earth. Over the past five seasons, there have been mumbled, ominous mentions of: “Winter is coming.” And everyone says, “Oh, shut up, fire witch, I want to quibble over land rights some more!!” Much like old, power-hungry dudes who still want to devote years to arguing about, say, the sanctity of marriage and occupied uteri, those people all seem very dumb now!

Ted: I don’t know if you read the books, Eve (Eve: Nope!), but Game of Thrones: Television Edition has gone ahead and chucked the more ponderous chapters of George R.R. Martin’s bibles and leapfrogged way, way ahead. Purists may scoff at the missed opportunities to linger over the stitching on leather jerkins, but I’m woo-hooing all the way since things are actually freaking happening. Big things: Like Jon Snow (the show’s designated “winter is coming” champion) finally facing off with actual white walkers and staring into the dead-scary baby blues of The Night’s King, their leader.

Lest you think this is simply an excuse to nerd out (it is: Valyrian steel kills white walkers, mmmggghley!), I think there’s a definite parallel with storytelling in the age of climate change. Firstly, urgency is key. You can talk to wildlings (duh, your average climate denier) until you pass out, but there’s nothing like vivid disaster on the doorstep to make them sit up and pay attention. Secondly, we need leaders who can take a beating, aren’t afraid to shout the same slogan over and over, and are really good with swords. Bonus points if he/she’s a bastard (maybe).

Eve: The New York Times very correctly noted that Jon Snow is the Al Gore of Westeros. True — if Al Gore were way more of a babe and also more prone to fits of angst. (I might have that all wrong, though — you tell me, Tipper!) But Jon, like Al, has been going on for a long time about the impending white walker invasion, and everyone in his surly, shaggy camp responded with: “Ugh, fine, but we should really be spending more time making sure that our furry wildling foes stay off our lawn.” Congratulations, everyone: Now said foes have actually become your worst nightmare — namely, hungry ice zombies — and prospects for survival are far, far bleaker than they were before.

What about those prospects, Ted?

Ted: That’s the painful part, since we don’t have a stab-and-play solution like dragonglass or Valyrian steel to slow our particular apocalypse (though maybe solar or wind power come close). The complicated leaps required to spare us from the worst of climate change become longer shots year by year, and require such immense international cooperation that it feels impossible — sort of like that avalanche of skeleton warriors. At minimum, I think this episode should be required watching for every single international negotiator and nabob taking part in the Paris climate talks. Maybe, just maybe, they’ll realize that collectively they’ve been dithering for ages, like a day-drinking Cersei at a small council meeting.

I think it’s reasonable to say that this is a definitive snow-hits-the-fan moment on good ol’ Game of Thrones — and hopefully results in a resounding: “Oh, shit, this whole ‘Winter’ thing will actually ruin our lives in ways that were previously inconceivable.” We don’t really want a real life white walker invasion to bring about a similar realization for, say, anyone with any part in the Paris agenda — but hey, if it works, it works!