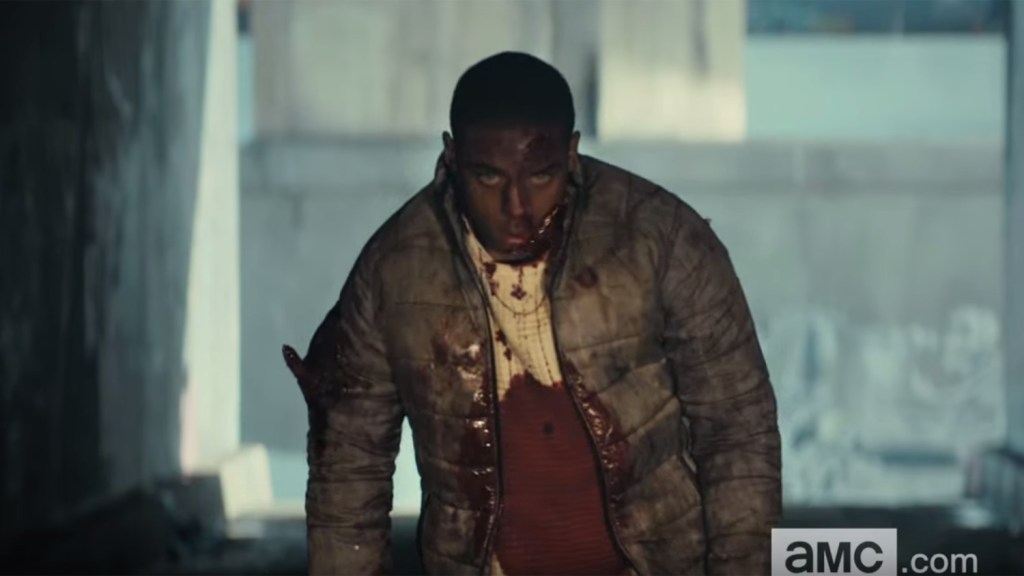 The opening scene in the series premiere of AMC’s Fear the Walking Dead — a Los Angeles-based spinoff of the network’s wildly successful The Walking Dead — tells you everything you need to know about the high value of white life in a fictional story about a real city where white people are a numerical minority. The series keeps up a steady assault on black bodies — as it also reveals a flawed understanding of the city where it’s set.

Like any big city in the U.S., Los Angeles remains deeply segregated. So far, Fear the Walking Dead largely takes place in El Sereno, which is less than 5 percent white, but you’d hardly know that by the protagonist family that resides there: Madison and Travis, a mixed couple (she’s white, he’s a man of color), along with Madison’s two white children, Nick and Alicia.

The series opens on Nick. He’s a junkie just waking up in an abandoned church a few miles west in Silver Lake and hazily making sense of what’s happening. First he stumbles upon a fresh corpse — the body of a man of color who we’ll likely never know anything about; then he runs into Gloria, a zombiefied white friend who is literally eating an unidentified black man’s face off. Nick flees, running into the street before being struck by a car. As he is helped by concerned passersby at a landmark Silver Lake plaza, we realize the zombie apocalypse has just begun.

El Sereno and Silver Lake have long been contested ground in Los Angeles. Silver Lake has undergone massive gentrification: Fancy vegan eateries, largely catering to wealthy white clientele, have replaced immigrant-owned retail shops over the last few decades, and a Whole Foods is slated to open next summer. The neighborhood remains a favorite for out-of-towners coming to Los Angeles to ruin it for the rest of us with their craft beers and trust funds. El Sereno, meanwhile, has largely staved off gentrification, at least for now. Elephant Hill, a massive open hill space at the heart of El Sereno, which is frequented by the more than 95 percent residents of color that live there, was threatened by a colossal development project over the past two decades — a plan that local residents fought and stopped.

That’s why the steady presence of so many central white characters in Fear the Walking Dead seems so out of place. It’s as if the show only goes to Los Angeles to erase the diversity that’s the city’s defining feature. The protagonist family is closely connected to a magically integrated local high school. (If you were from El Sereno or nearby, you’d immediately recognize it as Wilson High School — here, it’s renamed as Williams High School.) Travis — played by Cliff Curtis, a Maori actor who usually gets weirdly cast in Latino or Arab roles but maybe will get to just be Maori-American this time — is an English teacher there. Madison is a benevolent guidance counselor who helps an improbably named and definitely bullied Latino student, Tobias, avoid getting in trouble with Artie, the black school principal. Alicia, meanwhile, is a star student with a black artist boyfriend named Matt. We see the family frequenting a hospital where a defiant Nick is being held for observation. But Nick escapes — which leads Travis and Madison to Calvin, one of Nick’s friends, who happens to be black.

Seems diverse, right? So far, there are even three black characters: Calvin, Artie, and Matt. Except not really. In the first episode, we learn that Nick’s friend Calvin is a drug dealer intent on killing Nick. While white Nick seeks redemption from his family — and from us, his audience — Calvin, who’s black, is relegated to being a murderous heroin peddler. Both wind up in the iconic Los Angeles River (except, in this version, the graffiti is absolutely awful and illegible), struggling over a gun; it goes off and Calvin dies. After some time Nick, with stepdad Travis and mom Madison in tow, returns and finds that Calvin has turned into a zombie. Cut to the inevitable: Calvin’s body, run over and mutilated.

Artie, the black principal, faces a similar fate. Madison returns to the school to find that he has mysteriously turned zombie and is threatening Tobias, the Latino kid — so she bashes his head in with a fire extinguisher.

Are you keeping count? By episode two, we’ve seen three badly mangled bodies: the unnamed black man whose face is dreadfully consumed by zombie Gloria in the church; the secret drug dealer Calvin, whose black body is ravaged at the river; and Artie, whose black body is bashed to bits at the high school. Sure, it’s hard to kill zombies — and violent slaughter has long been a theme in the Walking Dead franchise. But, even in fiction, there’s something unconscionable about reserving the highest level of violence for the black bodies on the screen.

Meanwhile, Matt, Alicia’s boyfriend, has apparently been bitten and is sick. We have yet to see what happens to him — but by episode three, Fear the Walking Dead has essentially lost all its black characters. Perhaps this does mimic reality in Los Angeles, whose real-world black population is declining as non-black Latinos become the growing majority.

Back in zombie Los Angeles, Travis has been trying to connect with his own son, Christopher, with the help of his Latina former wife, Liza. The three escape a riot by hastily hiding in a barbershop run by what we later learn to be a Salvadoran family, the Salazars. Supposedly Salvi, that is. As much as I love Rubén Blades, the Panamanian salsa singer and occasional actor, I have a hard time believing his accent is Salvadoran on Fear the Walking Dead. He’s with a character named Griselda, who’s also supposed to be Salvadoran — but nope, that’s definitely a Mexican accent when she talks. Their daughter, Ofelia, was supposedly taught Spanish in the home, but has the most gringa accent you’ll ever hear on network television. (She is played by Swedish-born Mercedes Masohn.) So there’s that. Los Angeles is home of hundreds of thousands of Salvis — you’d think they could find three that could act in this series.

Madison, Nick, Alicia, Travis, Liza, Christopher, Daniel, Griselda, and Ophelia — nearly all the characters we’ve met minus the black ones who were mutilated or disappeared — all wind up at the house in El Sereno. They make an escape plan to go to the desert. That’s confusing, given that they’re a half-hour drive from the Angeles Forest. But this show has proven that it doesn’t understand Los Angeles anyway, so who cares, right? It’s in this home’s kitchen that Travis’ current partner, Madison, squares off with his Latina ex, Liza. While Liza tries to talk parenting for the sake of their children, Madison ignores her, pointing to a neighbor-turned-zombie. She tells — not asks, but tells — Liza that should she become a zombie, Liza is to handle the matter. “I need you to take care of it,” Madison orders.

This scene cleanly wraps up Fear the Walking Dead, halfway into the series. White characters, their stories, their needs, their bodies — their very whiteness — are placed first. So far, they’re supported by non-white characters (although I’m still confused as to whether people like Lorenzo Henrie, who plays Christopher, are actually Latino or European-Americans with good tans). And so far, their collective existence hinges on virulent anti-blackness.

Imagining a brand-new Los Angeles, and El Sereno in particular, didn’t need to be like this. The series would do well to hire people of color that know a thing or two about this place before it gets too much worse.