Is there such a thing as eco-friendly bike lube? 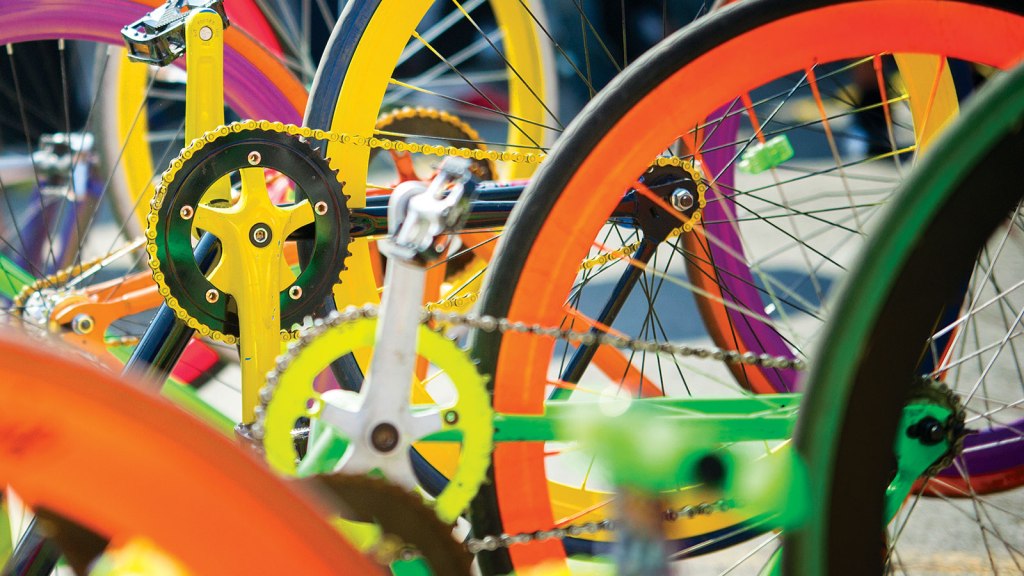 Shutterstock
For Those About to Ride, We Sa-Lube You

Is there such a thing as eco-friendly bike lube?

Could you recommend a homemade, environmentally friendly lubricant that I can use on my bicycle chain? When I purchased my bicycle several years ago, the shop owner recommended a particular lube that contained quite a few ingredients that I’m sure are not good for the environment or animal/people health. Instead, I was hoping that I could use something readily available, like olive oil or some mixture of similarly benign ingredients. I have a foldable bike that I ride 15 minutes to and from the metro each day for work, and I also use it sometimes on weekends for fun or doing errands.

The wheels on the bike go round and round … with the help of a nice chain lube, of course. As you (and pretty much everyone who’s ever glanced at Grist) know, cycling is one of the all-time great eco-friendly activities. So it’s a shame that a product that makes cycling easier — by keeping abrasive dirt at bay, extending the life of your chain, easing shifting, and generally smoothing your ride — often contains some questionable ingredients.

Let me be clear from the get-go: The simple choice to ride your bike instead of drive somewhere has a big impact, one that vastly outweighs concerns over what you’re using as a chain lube. But since you’re already making that choice to do something very, very good for the planet and yourself, we might as well pedal that extra mile and look for the most sustainable goo we can.

So what’s the friction with your average chain lube? For one thing, it’s probably derived from petroleum. And on top of that, many brands contain the chemical PTFE (also known as polytetrafluoroethylene for you chemists out there, and Teflon for the rest of us). We’ve tackled this topic in the context of nonstick cookware in the past, and the issues are similar with bike lube: Producing PTFE requires the use of another substance, a perfluorinated chemical (PFC). The worst of these is PFOA, which is bioaccumulative (it builds up in the environment and in human tissues) and takes a long time to break down when we dispose of it — a problem, as it tends to get dumped into the air, water, and dirt around chemical plants. Worse still, it’s linked to cancer in people and animals.

The good news is that the PFOA was due to be phased out of PTFE production by the end of 2015. The bad news, though: The replacement chemicals (typically other PFCs) are still environmentally suspect. For that reason, it’s smart to steer clear of it, on and off our bikes.

So where does that leave you, Jeff, a dedicated bike commuter who just wants to keep his chain squeak-free? Well, the DIY route might not be the best move. Most homemade recipes I’ve seen are still pretty heavy on the petrochemicals (like this example, which relies on motor oil and mineral spirits). Paraffin canning wax is another effective, long-lasting option — but again, there we go with the petroleum products.

You might be able to get away with using olive or another vegetable oil as a chain lube, but the stuff that sautés your kale so nicely doesn’t last long on your bicycle. It’ll do in a pinch, but bike experts advise against relying on it because it attracts grime and gunks up the machinery (besides forcing you to reapply frequently).

So in this case, a better option might be a greener commercial lube. These aren’t easy to come by, but they do exist. Disclaimer: I haven’t tested these products myself, nor am I in the running for the title of Ms. Bike Lube Spokeswoman 2016. I’m just calling ’em as I research ’em. That said, Slick Lube sports the USDA-Certified Biobased Product label (which we know is legit), and Green Oil is PTFE-free. Perhaps you’d like to give one of those a spin?

Again, Jeff, I don’t want you to worry too much about this. Just hopping on that bike slashes your personal carbon emissions by a factor of five over taking the bus and a factor of 10 over a passenger car. You’re preventing the release of other nasty fossil-fuel byproducts, such as hydrocarbons and nitrogen oxides. You’re reducing traffic, contributing to safer streets and cleaner air, improving your fitness, and probably having a lot more fun while you’re at it. That’s something to celebrate, no matter what you have slicking down your bike chain.