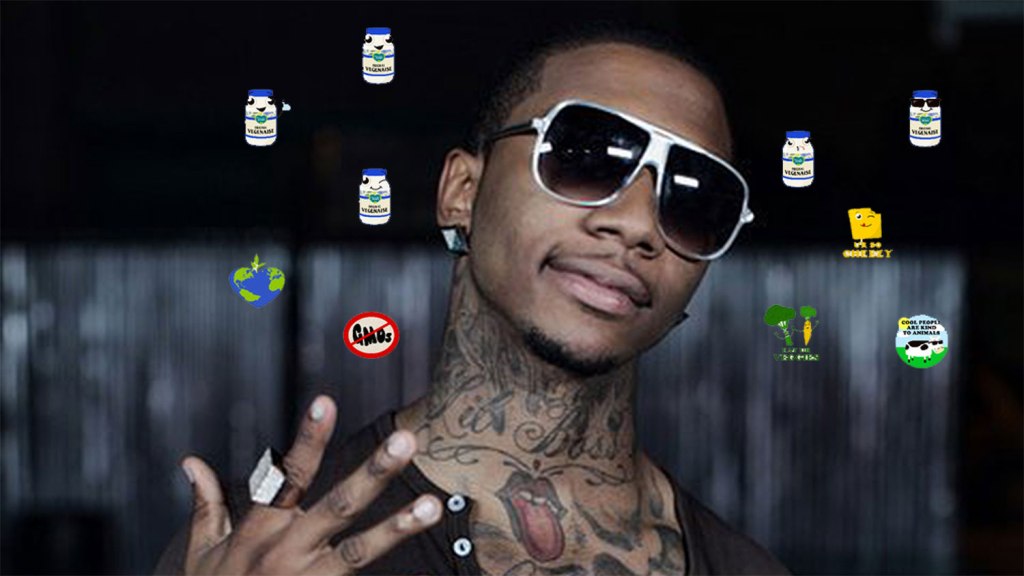 Have you ever wished that you could express yourself with the #blessed vernacular of Lil B the Based God? Rejoice, for now the bizarre alt-rapper has partnered with Los Angeles-based food company Follow Your Heart, the entity behind Vegenaise, to develop his own set of emoji.

Who is Lil B? He got his start in his teen years with The Pack, a group that blew up at the height of the Bay Area hyphy movement with their song, “Vans.” Since then, Lil B’s developed a bit of a cult following as a solo artist, baffling critics and listeners alike with his mystique, largely built through social media.

You’ll find him slinging out pearls of wisdom like this:

But through all the theatrics, Lil B has shown his activist side, too. In December, he released, “I Can’t Breathe”  his response to the death of Eric Garner, a black man from New York City killed by a white NYPD officer who put him in a chokehold. Garner’s death sparked further protests across the country when a grand jury decided not to indict the officer on homicide charges. Last July, Lil B released a similarly powerful track about black pride, “No Black Person is Ugly.”  Slate’s Jonah Weiner refers to the rapper as “a brilliantly warped, post-Lil-Wayne deconstructionist.”

The rapper’s latest venture, VegEMOJI, is an emoji app that puts a green spin on Lil B sayings like, “Plant Based 4 Life,” and “Cool People are Kind to Animals.” The app also directs buyers to local carriers of Follow Your Heart products.

As Lil B told reporter Molly McHugh at The Daily Dot, he supports Follow Your Heart’s vegan premise:

While the rapper isn’t vegan (I had to ask), he says he’s been trying to cut down on processed foods and admitted he’s “ashamed of eating meat.” Despite remaining a carnivore, Lil B says Follow Your Heart has been an inspiration to him, and working with the company was a natural fit. “I only want to do things that help people, so sometimes my projects take me awhile,” he says.

Originally, Follow Your Heart reached out to Lil B, but he was quickly on board. “I wanted to do something to bring their company into pop culture awareness,” he explains.

“Follow Your Heart has built a grassroots following over the last 40 years as the highest-quality manufacturer of vegan foods such as Vegenaise (the best sandwich spread in the world), the same way that Lil B built his following and became the most well-known independent artist of our time. Lil B stands for love, positivity, and being true to yourself, and he also stands behind our principles of quality, compassion, and sustainability. We’re so excited to be spreading positivity with Lil B! Follow Your Heart and keep it (plant) based!”

As Grist’s Brentin Mock reported last July, this isn’t the first time the rapper has dropped some environmental wisdom, as he has fired off tweets about supporting local businesses, conserving electricity, and being anti-oil. His partnership with Follow Your Heart isn’t his first foray into emoji, either — you can peep Basedmoji here. Next up: Lil B-branded aromatherapy rice bags? We’ll wait on that check.