M. Sanjayan is hosting a new nature series on ... humans? 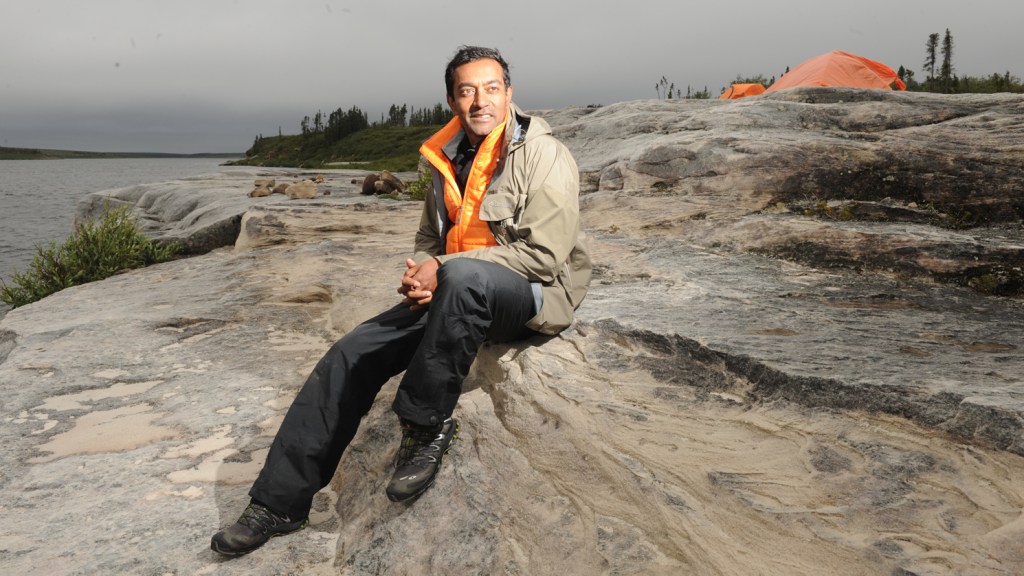 M. Sanjayan is hosting a new nature series on … humans?

M. Sanjayan, conservation scientist for Conservation International, Emmy-nommed TV host, and one of our favorite people, is the host of a new nature documentary about the world’s most dominant species: humans.

In his upcoming PBS series, Earth: A New Wild, Sanjayan shares stories about how humans are coexisting with nature in a way that works with nature’s needs. Sanjayan and his team took on five environmental landscapes to set the stage for every episode of the series: plains, forests, oceans, water, and “home.” They traveled to 29 countries and 45 locations, spending time with people who are altering habits and changing traditions in order to protect the environment.

In the “plains” episode, Sanjayan rides in a jeep with Maasai people who are using GPS technology to track the locations of lions, helping herders to protect their cattle, while allowing the lions to move the herds and prevent overgrazing. In the “water” episode, Sanjayan swims in Lake Malawi, the most biodiverse freshwater lake in the world. There, he tells the story of a parasite, delivered via a tiny snail, that increases the chance of contracting HIV. When a researcher discovered that the parasite is rampant due to over-fishing, he began working to build fish farms to allow people to keep their jobs, while also restoring the natural ecosystem.

These stories, and the many others told in Earth: A New Wild, all center around the notion that humans aren’t separate from nature; we’re a part of it. Sanjayan calls his journey to find examples of people’s positive contributions to nature a “desperate search” — and honestly, we’re not surprised — but he is convinced that people and nature can coexist. It takes a little grunt work, Sanjayan says, but “give nature a helping hand, and nature benefits from it.”

I talked to Sanjayan recently (despite my impulse to swoon at the mere mention of nature documentary, I held it together) about New Wild, our tendency to separate nature and humans, and why we need more than love to protect the wild. Here’s a condensed version of our conversation:

Q. Your view that humans should interact with nature in order to improve it runs counter to the traditional notion that we need to wall it off. What makes you think that we can be a force for good?

A. There are a lot of things that make me hopeful, and the biggest has nothing to do with humans: Nature is resilient. Right now, I’m walking on the pier [in San Francisco], and can see the Bay Bridge, the Golden Gate Bridge, and Alcatraz Island right in front of me — and I know that, in the water below me, there are massive areas of marine life. It’s quite possible that I could see a school of herring or a killer whale or a shark right here. I cannot tell you how many times I see glimpses of wild nature where I don’t expect it.

Second, people all around the world are starting to understand [that humans are a part of nature]. I’ve seen corporations, communities, even governments start to take on this view. I don’t want to sound Pollyanna-ish, and I absolutely don’t want you to get the impression that I think the natural world is fine, but I do want to tell you that there are some hopeful signs. There are a lot of people out there who are working on this.

Q. Of all the levels of society you mentioned — corporations, communities, governments — which do you think needs to change first?

A. Inspiration and change comes first from the individual, but the problem is that individuals alone are not big enough. Government is too slow, too ponderous. I think community is the right scale if you wish to see something happen. But first, you have to touch the heart of the individual, and then organize the community.

Q. How is this series different from other nature shows?

A. If you look at nature shows today and do a quick survey, the shows fall into a couple of categories. There are documentaries that are highly produced and highly expensive. They show you the earth in almost a pornographic way, in a way that’s not real. They show you the planet at dawn, as if it were the beginning of the world, and you’re supposed to sit there and marvel at it as if it were the Sistine Chapel. But you never see a power line, or a road, and you definitely don’t see a person.

On the other end, you have the action shows — like Steve Irwin, he was one of the big influences of it — where you get really close to an animal. But that’s not what conservation really is. Conservationists aren’t going out into the Amazon and trying to get bit by an anaconda.

In Earth: A New Wild, I want to show you the planet as it really is, which is a magnificent, unbelievable place, still full of natural beauty, but it has people in it. I think a planet with a human story is more beautiful, and telling that story is more relatable.

Q. When you visited us in April, you said that the face of climate change shouldn’t be a polar bear. So should humans be the face of it instead?

A. The human angle is extremely important — for this series, we only chose the stories where the human angle could be investigated. I think if someone told me there was a place where you could get the most amazing footage of lions hunting seals, we wouldn’t do that. Sounds amazing, but not for this show. If lions were hunting seals, which were helping fishermen catch fish, then we’d do it.

We went to Lake Malawi, and people were telling us that the fish were disappearing. And then, they were telling us that because there were less fish, the snail population exploded. Because of the snail population, people started suffering from a disease which makes you more susceptible to HIV. Then there’s a guy who has figured out how to reverse it. Stories like these, those are stories people want to follow, that give people hope and make people want to change.

A. If I were to make a film for Grist, this is the film I’d make.

Q. A couple of weeks ago, we had E.O. Wilson visit our office, and he talked about a suggestion to set aside half of the world for wildlife. I think the difference between his theory and the one you present in Earth: A New Wild, is that he’s saying cut the planet in half — give half to the wild, and half to humans. Whereas, you’re saying it should be integrated.

A. Splitting the earth in half won’t work. I went to 29 countries and 45 locations, and guess what? Every place we went had a human presence. When you push that angle, you’re actually saying that humans aren’t part of nature.

There are people on this planet, myself included, who just love nature and are fascinated by it. Sometimes, we start to believe that if we love nature, others should love nature too, and that should be enough to save it. But I’m here to tell you that love alone is not enough.

It’s like a marriage, you know? Love is an absolutely critical ingredient of a marriage, but if you tell me that’s all you need, it’s laughable. Instead, it should be a way of living, and understanding that you’re dependent on this other. It is so important to me that communities realize they need nature to thrive. You absolutely need it; it’s not just something to look at and admire.

Q. In the last series you hosted, Years of Living Dangerously, you told us you almost died. Any close calls in the new series?

A. A few, but it was a different kind of threat. I was face-to-face with lions, bears, sharks, tigers, and chimpanzees on this show. But the most dangerous thing was always the transportation. We were in small planes, boats, helicopters, and we did shoots where we’d combine helicopters and planes. If you ever get in your taxi in Bangladesh, your risk factor will go through the roof.

Q. Which location taught you the most life-changing lesson?

A.  The Aral Sea, in Uzbekistan, was the most memorable. The sea is something that any environmental studies major will read about, to learn about the shrinking of the lake. But we drove 150 kilometers over something that looks like desert, even though it was once a giant lake — that kind of thing, one of the largest man-made environmental disasters — you can’t help but feel massive guilt. It almost made us cry.

Q. Sounds like it brought you close to the ravages of climate change.

A.  It brought me face to face with choices I didn’t know I was making.

Earth: A New Wild begins on Feb. 4 on PBS. Check out the preview here: