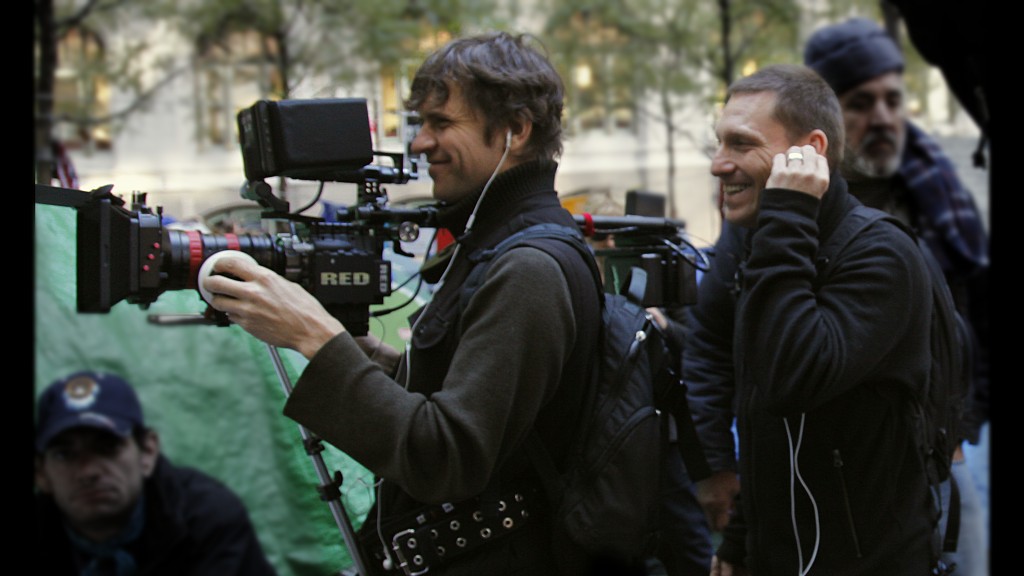 When Naomi Klein released This Changes Everything late last year, it was only half of the deal. The book — subtitled Capitalism vs. The Climate — indicts free-market-based solutions to climate change for perpetuating the root causes of the climate crisis. Real solutions, she argues, must confront the raging bull in the china shop: capitalist logic itself. Which is no small ask.

The second half of the project, the documentary film version of This Changes Everything, is related to these real solutions. The movie, which premiered at the Toronto International Film Festival in September and goes into wider U.S. release this month, focuses on people — those on the front lines of climate change and the fossil fuel industry’s exploits — standing up, camping out, protesting, and offering alternative visions of our world.

On Tuesday, we premiered a clip from the film. Directed by Canadian journalist and filmmaker (and Klein’s husband) Avi Lewis, the documentary introduces viewers to these human stories — those that form the bedrock of Klein’s arguments. In the interview below, Grist chats with Lewis about the documentary, as well as Bernie Sanders, Donald Sutherland, Enlightenment-Francis-Bacon hubris, and dismantling all that pesky capitalism. Our conversation has been edited and condensed.

Q.Would you speak about the main thrust of the film, for those who may not be familiar with the book?

A.The big idea of the film is to look at the roots of the climate crisis in the economic logic of our time. Now, some people feel that this makes the problem even bigger — we have to take on the whole economic system as well as the climate crisis — but Naomi and I are pretty convinced that market-based solutions have largely been a failure at creating the type of U-turn on emissions that the science requires.

But there’s also the potential to unlock a huge amount of activism and engagement in people when you start connecting the dots between inequality and climate change. And if anyone doubts that idea, go to a Bernie Sanders rally or look at the coverage of the pope. They’re both talking about the links between the climate crisis and the economic system, and they’re both on fire and capturing the imaginations of a lot of people.

The film itself is a portrait of community struggle around the world on the frontlines of fossil fuel extraction and the climate crisis. It’s not a talking-heads documentary. Naomi narrates it and her big ideas lead through it, but really it’s several portraits of community struggle, with some very inspiring and beautiful people who we have, and viewers can, connect with.

Q.Does the film have a target audience? When people walk out of the film, in a perfect world, what do they do next?

A.Documentaries have a really key role to play in organizing, because they’re a great way to get people together. We launched the film at the Toronto International Film Festival. After the premiere, there were 1,200 people in a theater who were having a half-hour conversation about climate change. How often does that happen? Where are the spaces for that to happen in our culture? So there’s this convening power, and there’s also the way a film can start a conversation.

In the film, there are portraits of people who are in no way activists, and yet they are struggling in communities in ways that are sometimes really sad and sometimes really triumphant. But they are always really grounded and connected. I hope that notion carries the potential for people to see engagement with this issue as something that’s not frightening.

In terms of what people can do, in Canada we just launched the Leap Manifesto. We had a cross-sectoral organizing meeting last spring in which we had a huge range of First Nations, environmental groups, trade unions, migrant rights activists, and minimum wage activists in attendance; and we started articulating a vision of the society we wanted in concrete policy terms. We’re having an election in Canada before yours in the States, and none of the politicians are talking about things we really care about.

We put this vision — of transitioning to a post-carbon economy in Canada as an opportunity to deal with inequality and a host of other social problems — out there in the middle of an election campaign and it really resonated. A huge range of celebrities came out wanting to endorse the campaign — Feist, for example, Arcade Fire, Donald Sutherland, Neil Young — but also lots of other groups. In a film, a list of policy options can come off as pretty dry, but in a political manifesto it makes a lot of sense.

Q.And how exactly do you begin to make a film about, well, changing everything?

I think people who are engaged with the climate understand that given climate change, everything about our physical world is going to change. We’ve already got enough carbon in the atmosphere; we’ve already baked in enough physical change with 0.8 degrees of warming. We’re already seeing substantial changes. But we’re on the road to 4 degrees. Even with 2 degrees and some miracle of an international agreement — which is nowhere on the horizon — dramatic, dramatic change is locked in. That’s radical change to wrap our heads around. The question is whether we can get off this path. Which would also be radical change.

My career has been in television and documentary, and so I’m a listener. I take the voices that I seek out and hear and I try to bring them to an audience. And I’m a storyteller. That’s why in the film — unlike in the book — we focus on one big idea, which is this 400-year-old fantasy that we can control nature and extract from it endlessly and that there will be no consequences. And you can draw a line from that Enlightenment-Francis-Bacon hubris straight to geoengineering: the hubris that we can deal with some human-created problem with a techno-human solution that poses no massive blowback. We need to change that story. We have a fundamental story about humans and our place in the world.

Q.Naomi cites an interaction with Angélica Navarro Llanos, Bolivia’s ambassador to the World Trade Organization, as a moment when she stopped ignoring climate science and started to see the potential of responding to climate change as something that could be a positive force. I’m curious if you had a similar moment.

A.I’ve been a journalist for 25 years. My first job was as a local news reporter in Toronto in 1990 covering fires and murders and food bank drives. For a long time I gave myself permission to not read those scary stories about melting glaciers and rising seas and species extinction because it ‘wasn’t my area’.

But now I’m the luckiest guy on Earth in that Naomi Klein is my partner in life as well as in work. When she came home from Geneva [where she was covering a U.N. conference in April 2009] — she was actually writing this piece about debt and reparations for slavery and colonialism — she came home with this idea about climate debt. I asked her, ‘What happened at this conference in Geneva’? And she told me that the most interesting thing was that she’d met this woman who said this [i.e. that thinking of countries as climate creditors and debtors was a natural solution to many global inequalities]. And I was like, ‘holy shit’.

It was a process for me of letting go of my last real job in television — I had a fantastic job at Al Jazeera making half-hour documentaries on whatever I wanted and never had to fundraise — and getting swept up in the prospect of embracing the big fight; the one that brings up the issues that bring everything else together. So I quit my job and decided to embark on this ridiculous idea of making a book and film and engaged political platform together.

Q.It’s certainly a massive endeavor. What else should we know about the project?

A.It’s also worth touching on the way we’re getting the film out, because it’s a reflection of the values of the project. We’re launching in New York on October 2 at the IFC and we’re doing a launch in Los Angeles two weeks later at the Sundance Sunset theater. But on October 20 we’re doing something that very few documentaries are able to do. We’re doing a special event screening in more than 30 cities across the United States and on the same day we’re on iTunes — and, still on the same day, people are able to book community screenings.

Normally, in releasing documentaries, you have a theatrical window in which people can only see them in theaters, which can sometimes be as long as a year. But thanks to the really visionary sales and distribution companies that we’re working with, as well as our investors, we’re actually putting [the movie] in the hands of people who will use it as an organizing tool at the same time it’s being made commercially available. That, in itself, is an expression of why we made the film and what we hope it can do.

You heard him: This Changes Everything premieres in New York on October 2, in Los Angeles on October 16, and in more than 30 cities across the United States (and iTunes!) on October 20. On the same day, groups will be able to begin to book community screenings of the film. Check out the trailer below.