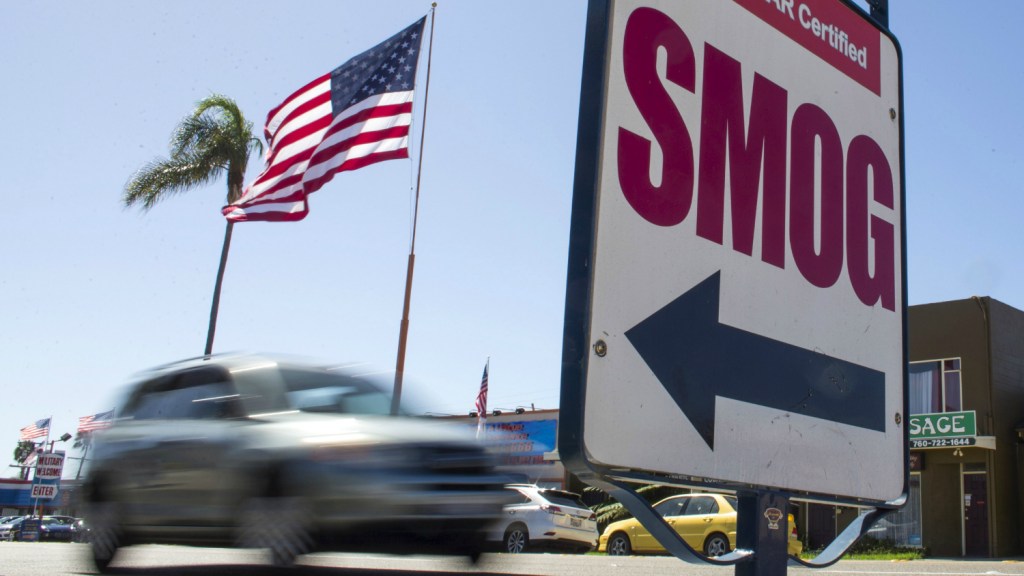 Like liberals who are struggling to accept that Pope Francis met with America’s most anti-gay county clerk last week, environmentalists are feeling betrayed by President Obama. On Thursday, the Environmental Protection Agency released a new regulation for ground-level ozone, a primary ingredient in smog — and it’s much weaker than green groups wanted.

The Obama administration has a long and tortured history with the smog rule; the EPA moved to strengthen it in 2011 but was overruled by the White House. Now the administration has finally imposed a new rule, only it’s too lax and four years too late. EPA is lowering the definition of a safe level for ozone from below 75 parts per billion to 70 ppb. That’s still well above what the environmental and public health communities consider truly safe for human health, which is 60 ppb. This is the latest in a series of letdowns from Obama on rules governing development of and pollution from fossil fuels.

The EPA presents the rule as a victory for clean air. “Today’s action is one of the most important measures we can take for improving public health, reducing the costs of illness and protecting our children’s health,” said EPA Administrator Gina McCarthy in a statement. EPA estimates that by 2025 the new rule will annually prevent 320 to 660 premature deaths, 230,000 asthma attacks in children, 160,000 days when kids miss school, and 28,000 missed work days. (These numbers exclude California because much of the state will have longer to comply.) The economic benefits from that will greatly outweigh the costs, according to EPA’s analysis.

But environmental and public health activists are unanimous in their response that the rule — while an improvement over the status quo — should have gone further, lowering the standard to 60 ppb. “The Obama Administration has fallen short of setting a smog standard that fully protects the health of our families,” said Sierra Club Executive Director Michael Brune in a statement. “Over the past seven years, medical scientists have been clear that any standard above 60 parts per billion (ppb) puts our communities at risk and is especially dangerous to children, seniors, and people with respiratory illnesses.”

The American Lung Association argues that lives will be lost to EPA’s political timidity, noting that EPA’s own analysis last year found that a 60 ppb standard would have prevented up to 7,900 premature deaths, 1.8 million childhood asthma attacks, and 1.9 million missed school days. “The EPA’s independent scientific advisors reviewed the evidence and concluded that a level of 60 ppb would provide more public health protection than a standard of 70 ppb,” said American Lung Association President Harold Wimmer in a statement.

Asked about the criticism on a call with reporters Thursday afternoon, McCarthy said the evidence of adverse health consequences between 60 and 70 ppb is too uncertain to warrant the tougher standard. “I have to set a standard that is no more or less stringent than necessary to protect sensitive groups [of people],” said McCarthy.

Thursday’s announcement is the culmination of a seven-year battle between activists and industry lobbyists over the ozone rule. The George W. Bush administration in 2008 and the Obama administration in 2011 overruled guidance from EPA’s own scientific advisory panels on lowering the ozone limit. As I recounted a year ago when this latest rulemaking process began:

In 2008, when the ozone standard was 84 ppb, the scientists both inside and outside of the agency found that it should be lowered to between 60 and 70 ppb. George W. Bush’s EPA administrator, Stephen Johnson, overruled them and issued the seemingly arbitrary standard of 75 ppb. This provoked the Clean Air Scientific Advisory Committee to take the unusual step of sending a letter publicly contradicting Johnson. Environmental groups sued, arguing that the standard was not compliant with the Clean Air Act.

When President Obama took office the next year, environmentalists hoped his EPA administrator, then Lisa Jackson, would revise the standard. And she did decide to reconsider the standard instead of defending the status quo in court, on the grounds that the Bush standard was “not legally defensible given the scientific evidence.” But in 2011, when she tried to move forward with a stricter rule, the White House yanked the rug out from under her feet. Reports at the time suggested this decision was largely the work of White House Chief of Staff Bill Daley, a pro-business centrist and former banker and lobbyist. The business lobby, most notably the National Association of Manufacturers (NAM), argued that reducing the allowable smog levels would force coal plants to close, raise energy prices, and slow the economic recovery.

And so the rule remained stuck at 75 ppb, an unsafe level by the government’s own findings, until now. Enviros hoped that this year Obama would finally raise the standard to meet the science. The economy has recovered, Obama is no longer up for reelection, and in his second term he has grown bolder about using executive authority to protect the environment. And the scientific evidence supporting a lower ozone limit has grown in the last few years. As I reported last November when the EPA released its draft proposal for the rule:

Most advocates say that the agency’s own findings show 60 ppb is the level needed to protect the public. … “We don’t agree that 65 is strong enough,” says Paul G. Billings, senior vice president for advocacy and education at the American Lung Association. “That’s the position we took in 2008 and [again] in 2010, and the literature is even stronger today. You can see significant additional health benefits [at 60 ppm].”

Republicans and the business lobby adamantly opposed any stronger standard. Even though Obama caved to their pressure and came closer to what they wanted than what his base demanded, they are complaining about the rule anyway. “Today, the Obama administration finalized a rule that is overly burdensome, costly and misguided,” said Jay Timmons, president of the National Association of Manufacturers, in a statement. “For months, the administration threatened to impose on manufacturers an even harsher rule, with even more devastating consequences. After an unprecedented level of outreach by manufacturers and other stakeholders, the worst-case scenario was avoided.”

Obama has made combatting climate change through executive action a central plank of his legacy. The ozone rule is primarily about protecting the lungs of children, the elderly, asthmatics, and others who are particularly harmed by dirty air. But since the main sources of ozone — in particular coal-fired power plants — also cause carbon pollution, a tighter ozone standard could help the climate by forcing coal plants to spend more money to comply with the law. That would make coal more uneconomical and speed the transition to cleaner energy. In other words, from a climate change perspective, the fact that a 60 ppb standard would have a much higher economic cost than 70 ppb is an argument in favor of 60, not against.

Obama, like Pope Francis, has been exciting progressives with his climate leadership of late. But Obama has proven once again that — as surely as the Pope clings to retrograde views on marriage — he will disappoint enviros over and over when it comes time to really put the squeeze on fossil fuels.