Residents fight for economic and environmental justice in one Illinois town 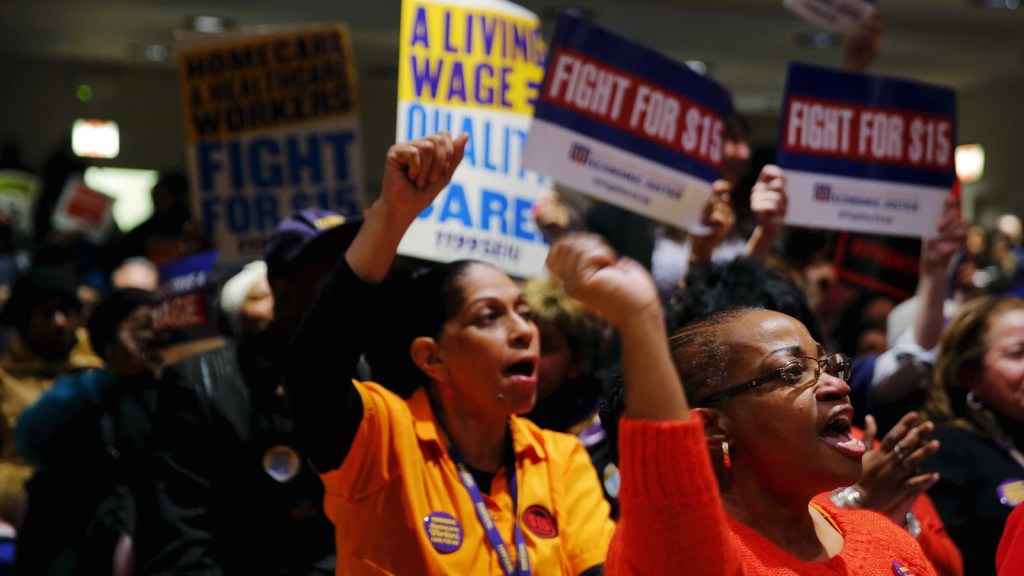 Members of the audience cheer as they listen to speakers at a union rally for higher minimum wages in New York. REUTERS/Lucas Jackson
Living

Residents fight for economic and environmental justice in one Illinois town

But toxic air and water aren’t its only issues — far from it: Waukegan’s residents are further afflicted by low wages and lack of health insurance. The city is a striking example of how the fight for equal economic opportunity the quest for environmental justice are inextricably tied.

On Friday, the United States Commission on Civil Rights held an environmental justice hearing in Washington, D.C. that focused specifically on coal ash and coal power plants and their prevalence in low-income communities and/or communities of color. The hearing included speakers from towns dealing with the effects of coal ash ponds in Alabama, Illinois, and South Carolina, as well as scientists and environmental justice lawyers and activists.

Community activist Dulce Ortiz, representing Waukegan, described in detail how coal infrastructure has burdened her community. According to Ortiz, the local plant has contributed to groundwater contamination, and well monitors indicate that the contamination is ongoing.

“My mother and I suffer from asthma,” Ortiz said. “She, like many community members, doesn’t have health insurance.” Ortiz and her mother are far from the exception — a 2012 study found that one in three children in Waukegan and North Chicago have asthma or asthma-related symptoms.

But the coal plants in Waukegan are also “suffocating our communities economically,” Ortiz went on to explain. Approximately 20 percent of the population lives below the poverty line. And when asked about the claim that the power plant provides much-needed jobs to Waukegan, Ortiz outlined the real costs and benefits: The coal plant provides 150 jobs, and only 12 percent of those go to the 80,000 residents of Waukegan.

Ortiz explained to the Commission that many residents are without health insurance and are working minimum wage jobs: “[Residents are] left with the decision of: ‘Am I going to buy groceries for the week or am I going to buy a $300 inhaler for my child?’” It’s a decision that no one should ever have to make.

The situation in Waukegan illustrates how we can’t achieve environmental justice without economic justice — which means, in general terms, that economic institutions serve all people equally. In practice, it would achieve low rates of unemployment, living wages, and easy access to food, healthcare, and healthy housing for all communities. Not only does poverty compound the issues of environmental destruction, it also makes it less likely that community members will have the power or the time to fight these destructive corporations.

Another notable event occurred last week — one that could serve as a step to amend the wrongs done to Waukegan. The Black Youth Project (BYP), an organization founded just a few miles south in Chicago, issued an economic justice manifesto titled the Agenda to Build Black Futures. The document provides examples of the platforms that people should push for in their local communities to achieve better living and working conditions.

Furthermore, it connects economic justice with the Black Lives Matter movement and the push to end police brutality and mass incarceration. The Agenda states: “Economic justice and racial justice in the U.S. are inextricably linked, and neither can be won unless the struggles of young Black people are centered” and calls to fund economic justice by defunding systems of criminalization.

Among other things, BYP calls for reparations, a living wage, access to health care, and a workers’ bill of rights that includes the 10 following points:

All workers should receive a living wage (regardless of education/experience)

All workers should have access to provisions for maternity/paternity/parental leave.

All workers should have paid sick leave.

All workers should have the right to form a union and/or body for the purposes of collective bargaining for benefits, wage adjustments, sexual harassment, grievances and workplace safety.

All workers should have protections against discrimination based on perceived or self-identified gender presentation and sexual orientation.

All workers should have protections against discrimination based on past drug offenses or incarceration.

All gender-based and race-based pay gaps should be eliminated in public and private places of employment.

All adults who want a job should have a right to employment through public or private opportunities through a federal jobs program.

All children, regardless of the financial status the child was born into, should receive a Child Development Account or “baby bond.”

All people have a right to a guaranteed living income regardless of employment status.

In the Agenda’s opening letter, BYP National Director Charlene Carruthers states: “We live in a country that tells us not all of us deserve to breathe, eat well, or have access to water.” Aside from that line, Black Youth Project’s economic justice agenda barely mentions the environment, let alone climate change. Yet if the agenda were to be implemented, it would have a tremendous positive effect on our environmental resources. Economic justice would empower communities to fight back against oil and gas companies destroying their neighborhoods. They would be able to get the proper care and attention for their health issues caused by toxic pollutants. Labor unions that truly stand for their workers could advocate for healthy jobs and fight against corporations that destroy their workers’ health.

Back in Waukegan, Ortiz called for a transition away from the coal process and to bring in clean energy companies — with jobs going to Waukegan residents, of course. “The vision I have for my family and my community…[is] where corporate profits do not override the health needs of my family,” she said.