See-through fish reminds us that nature is way, way weirder than we can cope with 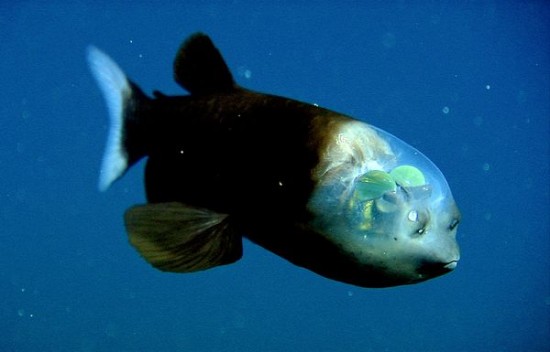 See-through fish reminds us that nature is way, way weirder than we can cope with

The Pacific barreleye fish has a has a see-through head. And that’s not just so it can weird you out by looking like a living terrarium — it’s for an even creepier reason. The fish’s noggin is transparent so it can SEE THROUGH ITS OWN HEAD.

Those dark circles on the front of its face … those aren’t eyes. They’re the fish equivalent of nostrils. The fish’s eyes are inside its transparent head. They look up, through its skin, to look for food above. And then sometimes they look forward, out of the front of its face.

lt’s kind of hard to believe this thing is real, because who has a transparent head? And the pictures look really too shiny. But apparently we’ve known these things existed since 1939 — only because “mangled specimens dragged to the surface by nets,” National Geographic says. Then, back in 2009, the Monterey Bay Aquarium Research Institute found one swimming around out in the ocean. You can watch it:

So there you are. A real fish that looks like something too weird and fake to even be CGI. Nature, we have to hand you the crown again.