Should we feel guilty for watching the Super Bowl? - Grist 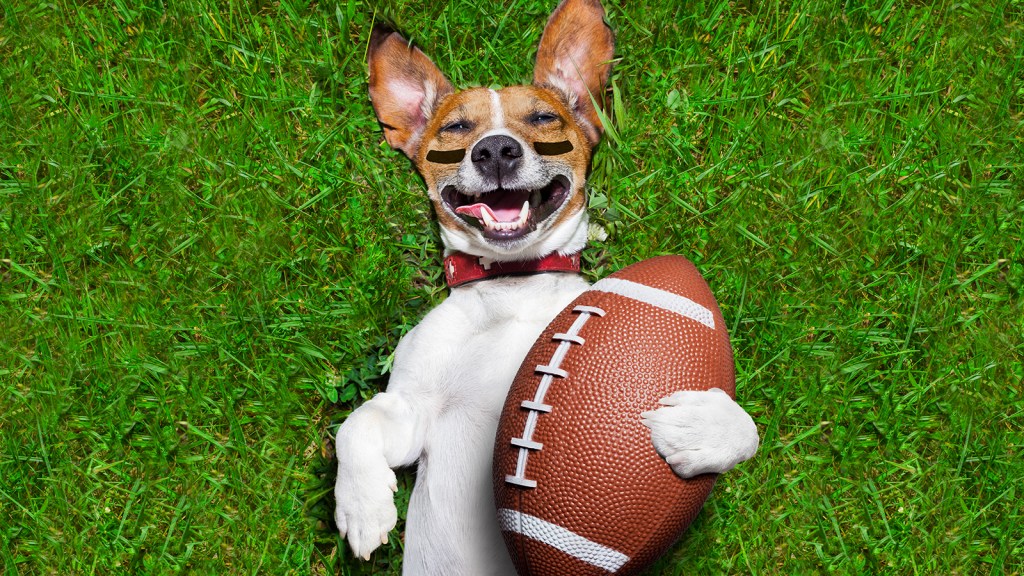 Should we feel guilty for watching the Super Bowl?

Should football be banned? It’s been nearly two years since the National Football League admitted in federal court that nearly one-third of NFL players go on to develop cognitive problems. Back in 1905, President Teddy Roosevelt threatened to ban football completely, unless the sport shaped up and outlawed moves like throttling and eye-gouging. The New York Times itself had already suggested, decades earlier, that maybe the secret to safer football would be to go after the money — if people couldn’t charge other people to watch football, or pay them to play it, maybe games wouldn’t devolve into “great public jousts and massacres.” That said, driving a car isn’t a great public health move either, and we don’t see anyone banning that.

Much like other offices, the water cooler talk at Grist has lately turned to football. Who will be watching the game? Who will be hate-watching (but secretly loving) the game? Who will probably forget that it’s even happening, because there are other things in the world, people? Is anyone planning on feeling guilty, or do we all feel guilty enough already?

We asked our writers “Are you watching the Super Bowl and why or why not?” Here are their answers:

No, because they call me “Moral Compass” in these parts

Katie Herzog: OK, so I’m not the most moral person on the planet, but I’m at least in the top five — and good, ethical people just do not watch football. A short list of reasons: Football is bad for players, bad for kids, bad for women, bad for schools, bad for cities, and bad for the planet. You know who it’s not bad for? The executive bottom-feeders who run the NFL — which, until just a couple of years ago, was a nonprofit. That’s right: An organization that brings in $10 billion annually was A NONPROFIT!!! And now that they’ve so generously given up their nonprofit status, they can now bury the fact the NFL commissioner Roger Goddell makes $44 million a year. Besides, football is boring.

No, because I am a fluffy rodent

Nathanael Johnson: My reasons are really boring. I have kids. They are too young to understand sports. They will not let me do anything that doesn’t focus entirely on them. Plus, I don’t have a television. And, I’m actually a squirrel living in a hole in a tree. So. It’s not like I can just go to a bar.

No, because there are way more reasons not to

Raven Rakia: I’m not watching. Between the displacement of homeless people and a few rich white men making billions while destroying people’s brains — there’s a lot of reasons not to make that effort.

No, because Coldplay can’t dance

Heather Smith: I have been known to watch the halftime show. Why does football even exist? Why can’t the whole Super Bowl just be about dancing? If you like to watch humans act out physically demanding rituals for your entertainment, there is nothing greater than watching Katy Perry wobble in her platform shoes on top of a two-story high lion puppet, making crazy diva face like she’s channeling Snow White’s wicked stepmother. Or seeing every move Beyoncé pulled off during Super Bowl halftime 2013, even the hair flips. This. This is what makes America great: singing, dancing, Left Shark, Missy “Misdemeanor” Elliott.

But this year, I won’t be watching. I would like to say that it’s because the NFL is all about taking the act of being an avaricious collection of sports franchises to the next level — this is an organization that had to be sued in order to pay for the healthcare costs of people who suffered irreversible brain damage while they were out making the NFL some serious cheddar. But really, it’s because Coldplay can’t dance. I’ve never even seen them try them walk in heels. No last-minute Hail Mary pass to the Queen Bey is going to make up for that

Amelia Urry: Only if I end up somewhere while it happens to be on. I just never got in the habit: no family traditions in favor, no fiery moral outrage against (I reserve that for people who put ranch on pizza). I probably used to be a snob about professional sports — “I just don’t see the point” and so on — but now I’m just kind of baffled, if enthusiastic. It turns out it’s fun to win a Super Bowl! I still don’t really understand what a “down” is and all that head trauma seems bad, but I know the names of about eight Seahawks, and that’s good enough to keep me in my city’s good graces.

Anyway, last year’s Super Bowl brought me Left Shark. Whatever comes next is sure to be a disappointment.

Yes, because fun things are fun

Eve Andrews: Watching the NFL is probably one of the least rational things that I do. We could talk literally all day long about how professional football perpetuates harmful gender constructs of how men and women should behave and be treated, about how it destroys its players’ brains and bodies, about how team owners will bully and squeeze every last cent out of the cities that host them, so help them God, about the great mountainous heaps of cash that swirl around the NFL to serve only a privileged few, or about the incomprehensible quantity of factory-farmed buffalo chicken wings that are inhaled weekly by beer-blurred, jersey-clad hordes. I would not refute one of those points. They are all correct.

The reason I watch the NFL every week — and will be watching the Super Bowl — is very simple: Because football reminds me of home and people I love, and that, ultimately, is enough for me. Oxytocin can make us do stupid things, which is why I’ll be rooting for the Broncos.

Cody Permenter: I’ve never been the biggest football fan. But growing up in Texas, football is just something you watch and don’t ask questions about. Here’s a dramatic reenactment of a conversation I had with my dad about football as a child:

“Dad, why are those giant men running around, chasing a ball and beating the shit out of each other?”

And that’s the real meaning of football, isn’t it? We don’t exactly know why we watch it, but it’s an excuse to get drunk and eat hot wings. If there’s another reason, I don’t want to know about it.

Yes, because I’ve got a whiskey bet riding on it

Andrew Simon: Whether I find myself worrying about work, money, family, or, ya know, the fate of the planet, sports gives me a temporary escape. And the Super Bowl is the superest of all sports spectacles. The commercials, the halftime show, the preceding week of hype, the theater. Excessive? Of course. Can I look away? No.

Watching the Super Bowl usually ends up being a social event, too. I’ll gather with family and friends to eat, drink, converse, and (yes) yell at the TV. It’s a bonding experience. The Super Bowl is, like it or not, a holiday: an excuse to gather and celebrate.

So yes, I will be watching. Besides, I have a friendly wager on the game with a buddy. I got Denver +5.5. Loser buys the winner a glass of fine whiskey.

Yes, because I am a hypocrite

Ben Adler: I will watch the Super Bowl because I am a hypocrite and a bad person. Much like being vegetarian, not watching football is a clearly moral course of action that I’m incapable of taking.

Football is a brutal sport. Repetitive hard hits leads to traumatic brain injury and early-onset dementia. Players work through pain and injuries the rest of us would consider incapacitating, enabled only by game-time injections of powerful numbing agents. The result is an epidemic among players of prescription painkiller addiction. In a competitive arms race, NFL lineman keep getting bigger, so their enormous weights, combined with the harsh toll of constant joint and bone injuries, leaves them at high risk for heart disease. Professional football should probably be banned.

At the amateur level, football is part of a jock culture that infects our high schools and colleges, undermining their academic mission. (For the facts and figures on the perversity of college sports read The Game of Life: College Sports and Educational Values.) NFL football is a spectacle of vulgar machismo: the all-male players literally thump their chests and strut like peacocks after assaulting an opponent and slamming him to the ground.

The NFL, especially the Super Bowl, is rife with excessive materialism and overconsumption. NFL television broadcasts cater to the right-leaning, mostly male audience with commercials for gas-guzzling trucks that can conquer roadless mountains, highly caloric junk foods, and the tasteless beers preferred by frat boys. So much money and effort goes into making Super Bowl commercials that they have become a cherished part of the event. The halftime show is a tacky, glittering extravaganza. While watching for four hours, viewers eat fatty foods by the fistful. You haven’t lived until you’ve tried my girlfriend’s buffalo chicken dip.

Football stadiums waste public money. Their massive footprints and parking lots destroy the urban fabric. More so than other professional sports, their huge spatial needs have led teams to abandon cities. The “New York” Giants and Jets play in a New Jersey wasteland and the “Washington” team with a racist name plays in Virginia.

I have no defense for football, the NFL, or the Super Bowl because they are indefensible. Even Jonathan Chait, one of the sharpest opinion writers out there, couldn’t mount a convincing case for football. And he really tried. Yet when the NFL playoffs start, my friends and I get together and watch.

I enjoy watching football because it is a fast, hard, balletic, exciting sport. There are few experiences in spectator sports more exhilarating than watching a kickoff returned for a touchdown, an interception in the end zone, or a field goal to win the game. Like most Americans, who continue making football the most popular American sport, I’m a weak person who lacks the courage of my own convictions. If you don’t believe me, consider that I write about the environment and yet I cannot give up eating meat.

Truth be told, that’s yet another reason I like watching the Super Bowl: It’s an excuse to throw my half-hearted dietary restrictions out the window. So Sunday night I will be at a friend’s apartment, with chips and wings arrayed on the coffee table, shouting at the referees on TV who can’t hear me, and thoroughly enjoying myself. I’d rather be happy than guilt-free.