Swedes really are better at everything, including setting their garbage on fire 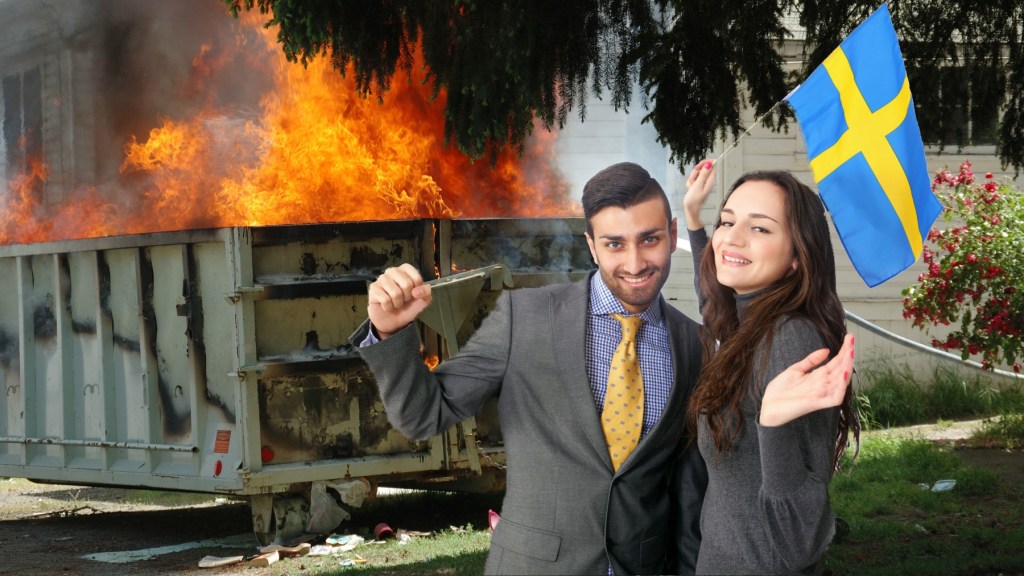 Swedes really are better at everything, including setting their garbage on fire

Do you have something in your life that’s causing you shame? Here’s an idea from the Swedes: Set it on fire.

1. That American Apparel dress that you wore approximately 15 Saturdays in a row during your sophomore year of college. LIGHT THAT SHIT UP.

2. Your eighth-grade book report on The Scarlet Letter, for which you received an F because you only read the first and last chapters. BURN IT TO THE GROUND.

3. That guy you met at the bar last weekend who is saved in your phone as “Bucket Hat.” OK — seriously, Grist does not condone murder! Set the phone on fire, you sadist.

4. The 251 million tons of non-recyclable and -compostable trash that the U.S. produces annually. CREATE THE LARGEST BONFIRE THE WORLD HAS EVER SE — no, wait, that approach seems irresponsible. There has to be a better way.

There is a better way to burn your garbage, and of course the damn Swedes have already successfully adopted it. (Fact: Anything remotely helpful or interesting that you have ever come up with in your life, a Swedish person has done better and more efficiently for years.) In 2012, Sweden sparked up 2.27 million tons of household waste in its waste-to-energy (WTE) plants, producing 8.5 percent of the national electricity supply. As a result, only 1 percent of Swedish garbage ends up in landfills.

As Daniel Gross reports for Slate, burning garbage isn’t the cleanest form of energy production. But when offsetting the amount of CO2 it produces by the emissions that would be released from garbage decomposing in a landfill over time, its real carbon impact is about 986 pounds of carbon dioxide per megawatt hour. That’s slightly less than the amount of carbon dioxide released from burning natural gas, and less than half the amount ascribed to burning coal. And also, since we can be perversely comforted by the fact that we will always have garbage, it’s a dependable and renewable source of energy.

Waste-to-energy plants do exist in the United States, so boo-ya, Sweden! We currently burn approximately 35 million tons of waste each year, which is WAY MORE than 2.27 million! Then again, the United States population is about 30 times larger than Sweden’s. Oh.

In the high school cafeteria that is the world, the Swedes are the Tavi Gevinsons, and will always be prettier and smarter and cooler than the rest of us — we must just accept that and move on.