Thanks, giving: Reflections on generosity, hunger, and the power of a shared meal 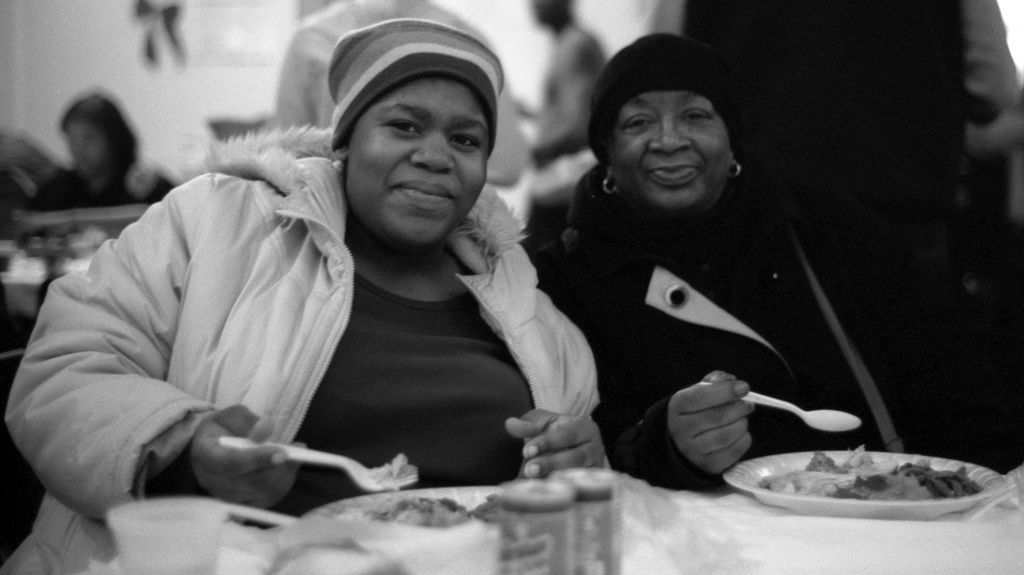 Thanks, giving: Reflections on generosity, hunger, and the power of a shared meal

There is one Thanksgiving that I will never forget. It took place at my Mother’s apartment on New York’s Upper Westside. It was the last Thanksgiving dinner that she hosted, and I was her only guest.

By then, permanently bedridden and unable to cook, mom ordered sliced turkey with all the fixings from a gourmet market. The catered meal was tasty, but lacked the home-cooked character of past feasts. What made this Thanksgiving memorable was not the food, but what happened after dinner.

During the elevator ride back down to the lobby, it suddenly occurred to me that there were people in the city who wouldn’t be celebrating Thanksgiving that night. I was gripped by a strange (for me) impulse to feed somebody like that — a quixotic desire for a lifelong bachelor who is barely capable of feeding himself.

You can imagine my amazement when I was met at the door of my mother’s upscale condo by a disheveled woman and her young daughter. “Give us a chicken dinner,” she demanded, as if sent there by divine central casting. In a state of mild shock, I shepherded the two of them to the nearest Kentucky Fried Chicken and ordered the fast-food version of a Thanksgiving feast. What surprised me was not their joy at this modest meal, so much as my own in providing it.

The experience changed me. For one thing, it sparked an interest in the under-reported issue of hunger in America, a story I’ve tracked since the mid-’90s as a journalist. More to the point, it made me want to feed people — an urge that I now indulge at a soup kitchen in the basement of America’s largest place of worship, the Cathedral of Saint John the Divine in Morningside Heights at the edge of Harlem.

Serving at the Cathedral is my way of going to church on Sunday. I chop vegetables and stir the contents of industrial-scale pots, then serve the food on a line with the other volunteers in the windowless gym adjacent to the church kitchen.

Emergency food providers like our soup kitchen are not enough, of course. With jobs still scarce and Congress nickel-and-diming the federal safety net, hunger in the U.S. is at its highest levels in decades. And it isn’t just the homeless who don’t have enough to eat; it is many working people too. Last week, an Ohio Walmart took up a food charity collection amongst its employees “so Associates in Need” – that is, their fellow Walmart staffers – “can enjoy Thanksgiving dinner.” Really, Walmart?

It is a well kept secret that our “land of plenty” is home to 50 million people, including an estimated 17 million children, who are “food insecure” at least at some point during the course of the year. We have one of the highest hunger rates in the developed world. Western Europe, with its generous social welfare programs, has all-but eliminated hunger. Canada is well on the way to doing so. The U.S., by contrast, barely squeaks past Romania, but falls behind Latvia in its rate of child poverty, which is the root cause of juvenile hunger.

It is a cruel irony that being hungry does not always mean not eating enough. Many who can’t afford nutritious fruits, vegetables, and meat load up on junk food, fast food, and empty calories. As a result, millions of people are both undernourished and obese at the same time. It is also true that our homegrown hunger is frequently episodic, as people move swiftly from feast to famine with changes in their employment, their health, or the timing of their benefit checks. We see our lines at the Cathedral swell toward the end of each month, when food stamp dollars run out.

When I started volunteering, I confess that it felt a bit awkward. Who was I to give people in charity what belongs to all human beings by right? Nobody should have to depend on hand-outs for their food! But gradually I began to see it differently. We weren’t giving (or receiving) charity. We were there to share a meal — just as most of us will be doing with our families on Thanksgiving.

Americans sometimes like to think that we are islands unto ourselves. Our culture tells us that we are (or should be) self-made men and women creating our own lives through sheer will power and relentless personal effort. But our need for food gives the lie to this myth of hyper-individualism. We are all dependent on the plants and animals whose bodies we consume, as well as the countless individuals whose labor grew the food, packaged it, transported it, and sold it.

On Thanksgiving, we celebrate this mutual interdependence. Just as the Pilgrims survived their first harsh winter in part because of the help they received from their Native American neighbors, we all depend on the generosity and skills of others to sustain us.

The Republicans in Congress who voted in September to slash the food stamp program by $40 billion should volunteer as I do at one of the soup kitchens or food pantries in their home district. That way, they’ll meet the kids, the elderly and the disabled, the working mothers and fathers who can’t always manage to eat well on paltry salaries, and even more paltry federal benefits. They can judge for themselves whether these are lazy freeloaders who are mooching off the system, or simply our neighbors who need a little help.

And if any food-stamp-slashing congressperson is in our neighborhood at noon on Sunday, they can join us for lunch at the Cathedral of Saint John the Divine. We never turn anybody away.