This 14-year-old will fix the planet before she graduates 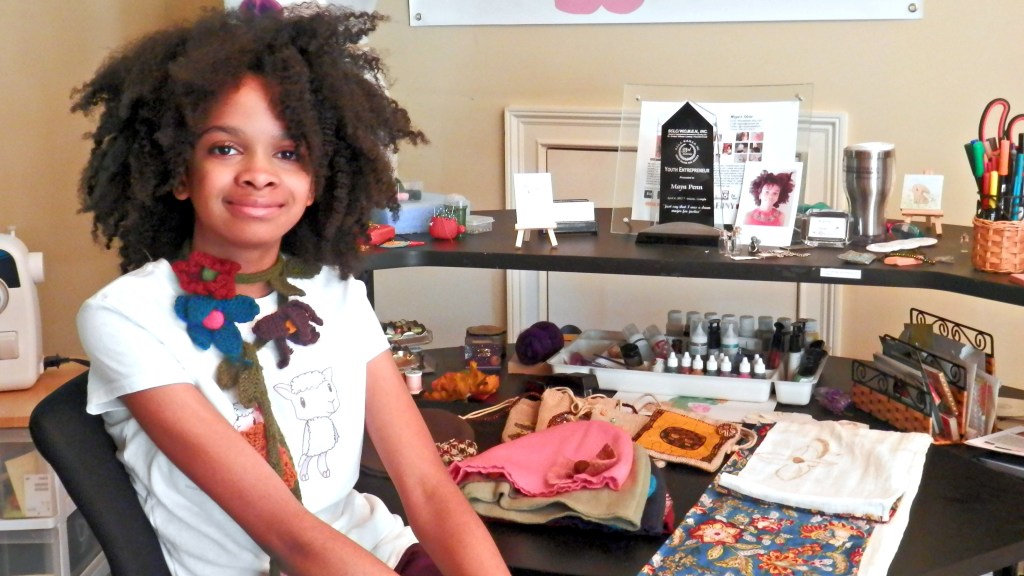 This 14-year-old will fix the planet before she graduates

In a dream world, every kid’s resume would look a lot like Maya Penn’s. Her dizzying fount of accomplishments by the tender age of 14 puts us all to shame. The multi-talented wunderkind is — so far! — an eco-fashion designer, children’s book author, artist, animator, coder, public speaker, entrepreneur, philanthropist, and environmentalist. She founded her eco-fashion line, Maya’s Ideas, when she was just 8 years old. “I guess I’ve always had an entrepreneurial spirit,” she says, matter-of-factly.

The Canton, Georgia-based artist has spent a huge chunk of the past six years designing and hand-making clothing and accessories out of organic cotton, hemp, bamboo, and vintage silks and wools. She donates 10 to 20 percent of her company’s profits to organizations she admires including Live Thrive Atlanta and the Captain Planet Foundation, and “no matter how big my company gets,” she says, “I will always use eco-friendly materials. No matter what.” (And hey, it’s getting there: Even Samuel L. Jackson has one of her eco-friendly scarves).

In 2011, when she was 11 years old and had too many environmental ideas to contain them all in a clothing line, Penn founded her own 501(c)(3) nonprofit, Maya’s Ideas for the Planet. Among other things, she’s sending eco-friendly sanitary pads to girls in developing countries, thanks to a partnership with MedShare, an organization focused on redistributing surplus medical supplies to those in need. She says she’s got 5,000 ready to go for a shipment this year.

Penn isn’t doing all this stuff in a vacuum, though; her sincere hope is to inspire others. As unfalteringly optimistic as only a 14-year-old activist can be, Penn’s ultimate message is that you (yes you!) can make a difference, no matter how small. We don’t all have to start nonprofits and design clothing lines by the time we’re 14 — she swears!

Of course, it’s hard not to be in awe of her myriad accolades. She’s already written and illustrated two children’s books with environmental messages — Lucy and Sammy Save the Environment and Wild Rhymes — that are printed on recycled paper. To do so, she secured a grant from The Pollination Project, a foundation that gives $1,000 seed funding to individual change makers. She is now part of The Pollination Project’s Youth Grantmaking Advisory Board, where she works to help develop youth-centered environmental projects. She’s also given three TED Talks and regularly visits schools to talk to students about environmental issues.

“I think it’s really cool that I’m able to help other people,” she says. “It’s always been my goal to inspire youth.”

She has an animated series in the works, too — about pollinators, in which bees and butterflies and hummingbirds get to be superheroes — that she plans to roll out later this year. Oh … and did I mention she’s working on a memoir? Because, you know, her two children’s books weren’t really “full-on, really long books.”

It’s unclear if she sleeps, but she is homeschooled, so that allows for a lot of flexibility and parental support: “If I have a speaking engagement on a Wednesday, and Wednesday is a school day, I can still make the homework up afterwards,” she says.

Luckily for the planet, Penn’s endless supply of creativity and zest for life is always focused on environmental preservation; she says her family has long been into recycling and organic gardening, for instance. When, a few years ago, she heard about a local reuse-and-recycle event called Metro Atlanta Kids Recycle Day and it was a little too small for her taste, she printed her own flyers to put up around the city. While she’s particularly focused on pollinators at the moment (there’s the animated series, plus she sells save-the-bees tees), she also cares about other pivotal climate issues such as Keystone XL (“It’s a bad word to all environmentalists, including me”).

Penn already grasps a key insight that almost every environmentalist has encountered in his or her life: If there’s inaction, it’s not because we’re apathetic. It’s because we’re overwhelmed. During her school visits, of course she meets young people who don’t care about the planet. “But there are a lot who do care that just don’t know what to do,” she says. “What’s going on in the environment seems like such a big deal that they have to do a big action, and they don’t know what that action should be.”

And it’s a self-fulfilling prophecy, this fear that whatever we do is too small to matter. “The reason why it seems like there’s nothing happening,” she says, “is because people are scared to do anything because they think that nothing’s going to happen!”

Therein lies the rub, but take it from a pro: “The smallest action leads to the biggest changes,” she insists. “It just matters so much. It has a big ripple effect, whether that person knows it or not. And that person might have been scared and might have been doubtful. But they went ahead and did it anyway.”

Her sage advice, then, to all the frustrated environmentalists out there? “You don’t have to have a ton of confidence to do everything you want to do. Go ahead and be afraid. Change will definitely come.”