What the hell is happening in North Carolina? 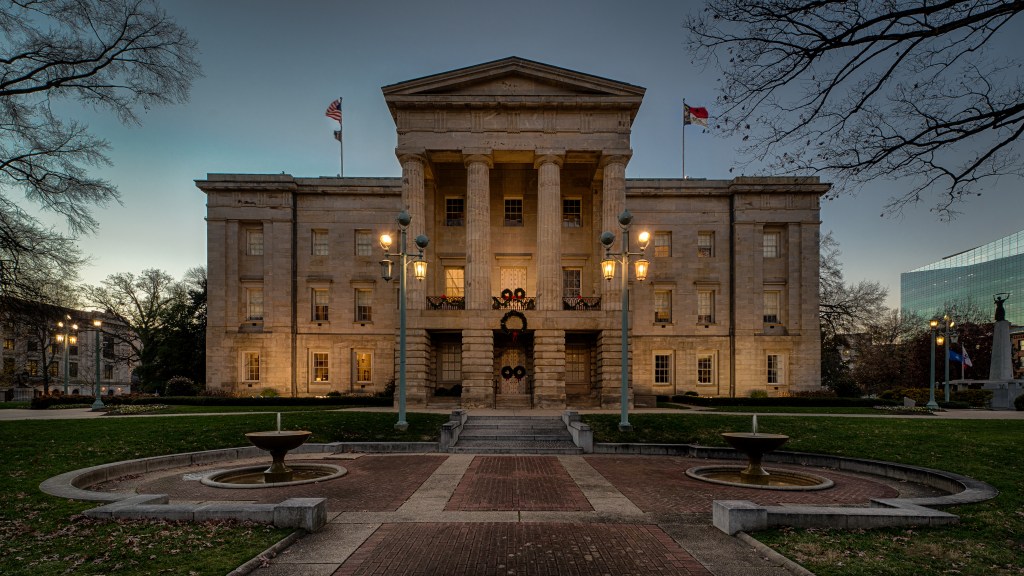 What the hell is happening in North Carolina?

My mom — like all moms worth their mom jeans — is on a lifelong quest to get all of her children to move back home to Asheville, N.C., so we’re close enough for her to drop in on uninvited. She brought this up on the phone recently when I was bitching about the high cost of living in Seattle and how I’ll never be able to buy a house in this city.

“I know where you can buy a house,” she said. “In fact, I’ve got one for sale. We’re downsizing.”

“Can’t,” I told her. “I’m looking at property under an overpass. Besides, Asheville’s not safe. Haven’t you heard of danger days?”

She hadn’t, but danger days occur when the heat index is 105 degrees or higher, and Asheville, my hometown is predicted to have 157 danger days by 2050 — second in number only to Charleston, W.V. It’s a terrifying thought: My parents moved to the mountains of North Carolina in the 1970s for the temperate climate — it was rarely too hot or too cold in those hills when I was a kid — but the climate is changing there, as it is the world over.

Despite these sobering predictions, the current crop of leaders in my home state prefer to stick their heads in the sand rather than deal with the reality of climate change: In 2012, the state legislature banned research into climate change, proving that politicians are much like five-year-olds. They don’t like something? They just ignore it.

But that’s not the only embarrassment. The internet was set aflame recently by the story of a small North Carolina town that rejected the construction of a solar farm after citizens voiced concerns that it would drive away young people, cause cancer, and kill vegetation. The kicker of the story was a quote from a local named Bobby Mann who was afraid that the panels would somehow deplete the sun of energy. It was a dumb thing to say, and the story spread widely, with Mann — rather unfairly — as the butt of the joke. Grist (me, specifically) was a part of that media: I called a solar expert and fact-checked the residents’ concerns. I won’t lie — I knew it was a bully’s move to pick on this town, but the opportunity to join the global media in poking my homeland in the side was too good to resist. And that’s because North Carolina deserves it.

Things are bad back home. There was a conservative takeover in North Carolina in 2010, when Republicans won both the Senate and the House for the first time since 1898. Two years later, Pat McCrory took over the governor’s mansion, the first time a Republican has held the office in two decades. Before then, North Carolina had always been a little bit more liberal than most of the South — state politics were dominated by Democrats, and we even helped Obama win the national victory in 2008. But after 2010, all that has changed.

In addition to the categorical denial of climate change by elected leaders, North Carolina’s ample natural resources have also suffered since Republicans took over. In 2014, 40,000 tons of toxic coal ash and 27 million gallons of wastewater spilled into the Dan River from a defunct Duke Energy coal plant. Subsequent investigations revealed the utility has over a dozen coal ash ponds leaking into watersheds across the state, which they have still failed to clean up.

After the spill, the state imposed a $25 million fine on Duke Energy to clean up a single coal ash site, but in a shocking reversal, the NC Department of Environmental Quality (DEQ) later privately negotiated the settlement down to $7 million for all coal ash sites in the state. Frank Holleman, attorney for the Southern Environmental Law Center, called the deal “a total surrender and collapse by DEQ” in an interview with Indy Week. Pat McCrory, by the way, worked for Duke Energy for 28 years, and the company gave $3 million to his Super PAC in 2014.

There’s more. The story that should have blown up this week doesn’t have to do with a solar farm in a town with 800 residents. Rather, we should be talking about how Facebook has threatened to take their data center out of the state because North Carolina revoked tax credits for construction of renewable energy. “We are only considering states with strong policies and a determination to produce renewable energy,” a representative from the company said at the Paris climate talks. That, as it turns out, does not include North Carolina. It’s a shame — the solar tax credit generated over $700 million in the state in 2014, according to data from the N.C. Department of Revenue, while costing the state just $126 million.

I asked my fellow North Carolina natives to share what they thought was the most shameful thing that has happened in the state since McCrory took over. Responses included: the recent appointment of Margaret Spellings, an openly homophobic member of the Bush administration, to head what was once one of the finest public university systems in the country (with a cushy base salary of $775,000); cutting food stamps for people without kids; making it a criminal offense to reveal what chemicals are used in fracking; making it legal to carry guns in bars; effectively reinstating segregation in public schools; and the infamous motorcycle abortion bill, which limited access to reproductive healthcare under the guise of a motorcycle safety law. Also under Republican leadership, North Carolina rejected Medicaid expansion, effectively denying healthcare to half a million residents.

My home state is suffering, and so are the people in it.

Luckily, North Carolina is full of people who care deeply about their state. Since 2013, thousands of North Carolinians have gathered on the lawn in front of the statehouse for Moral Mondays, peaceful demonstrations against state leaders. Last year’s Moral March was the largest racial-justice protest in the South since the Selma to Montgomery March in 1965, and attracted a crowd of over 80,000. For every rally in support of the Confederate Flag, there is another one opposing it. And even Republicans are pissed at what’s happening — Jason Thigpen, a state House veteran, recently changed his party affiliation after tiring of the extremist GOP platform. “I simply cannot stand with a Party where its most extreme element promote hate and division amongst people,” Thigpen said.

People like Jason Thigben —  and everyone who is working for change — show that there is still hope. There’s also an election coming up. But the truth is, it may already be won: North Carolina has one of the most gerrymandered maps in the country, with Democratic districts splintered into tiny fragments. The Republican stronghold is written into law.

It’s clear from 3,000 miles away that North Carolina’s danger days are well underway. These are the things I think about when my mom brings up moving home: 100-degree days, rivers filed with toxins, and politicians who care more about money than people. It’s funny that it was Asheville’s native son who wrote You Can’t Go Home Again. Of course you can — the question is, why in the hell would you want to?