Chances are you’ve never heard the phrase “danger day” when it comes to weather. That’s because they’re rare. You’ll want to get to know it, though, because climate change is about to make them a lot more common over the next 15 years.

A danger day is when the combination of heat and humidity (also known as the heat index) make it feel like it’s 105 degrees F or hotter. Warming temperatures are about to push U.S. cities into a new regime where danger days happen regularly.

Of the 144 U.S. cities Climate Central analyzed, only 12 of them averaged more than one danger day per year since 1950. Most of those cities are clustered in the South where humidity tends to be worst in the morning while temperatures peak in the late afternoon.

Danger days mak  going outside oppressive and physical activity a risky proposition. Extreme caution days — days when the heat index tops 90 degrees F — also pose a hazard for health and are just plain miserable (unless you’ve got a beach or movie theater nearby). These dangerous heat days pose the greatest threat to kids and the elderly, who are more sensitive to the heat, along with anyone that doesn’t have easy access to air conditioning.

These specific definitions of danger days and extreme caution days are part of the National Weather Service’s Heat Index, which measures both temperature and relative humidity. Historical numbers for U.S. cities are based on the number of times the apparent temperature exceeded 105 degrees F and 90 degrees F since 1950. Future projections for the same cities are drawn from climate models that estimate temperature and humidity assuming global greenhouse gas emissions continue unabated.

The biggest uptick is expected in the South and Southwest.* Five Texas cities will see 129 or more danger days annually, including Brownsville, which sits in the top spot. Arizona and Florida have two cities apiece on the list (Phoenix and Tucson for the former and Miami and Tampa for the latter). And Las Vegas rounds out the top 10 cities that are likely to see the most sweltering days by 2030.

Houston currently averages a single danger day per year, but by 2050 that number could jump to 129 days where the apparent temperature exceeds 105 degrees F annually.

Heat risk won’t be confined to southern cities, though. Places as diverse as Philadelphia, Salt Lake City, and Springfield, Ill., are projected to each go from zero danger days to more than 50 annually by 2050.

Extreme caution days will also see a major increase in some places. Charleston, W. Va., will deal with those types of conditions for about a hundred days a year, more than double what it currently sees. 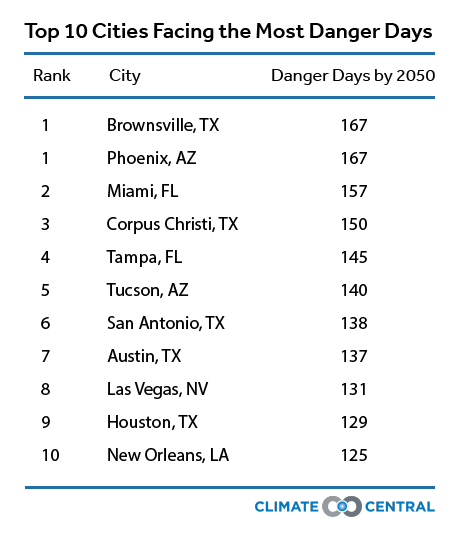 All that added heat will change the daily rhythm of life across the U.S. The impact on health will be a top concern, particularly for children and senior citizens. When the heat index rises above 105°F, heat exhaustion can set in and cause fainting, dizziness, confusion and vomiting. When humidity crosses 60 percent, the body also loses its ability to cool itself by sweating. Hot, humid conditions have made high school football a focal point for heat exhaustion as heat-related deaths have tripled since 1994.

Some states and cities have responded by setting up rules to cancel sports practices based on the weather forecasts while others have cooling centers and warning systems to help deal with oppressive conditions. Rising temperatures mean those plans will have to be adjusted and relied upon more regularly.

Outdoor laborers will see their productivity fall. According to findings in the Risky Business report, the productivity of farmers, construction workers, landscapers, and others who work outside could drop by 3 percent by century’s end.

It will also drive up how much people spend on energy as air conditioning goes from being handy to being a necessity. If greenhouse gas emissions continue on their current trend, energy expenditures could rise by up to 7 percent by 2050 and 21 percent by 2100. That added capacity will strain the electricity grid, and even violent crime could rise.

*Correction: The following paragraphs and chart have been changed to reflect updated analysis by Climate Central.