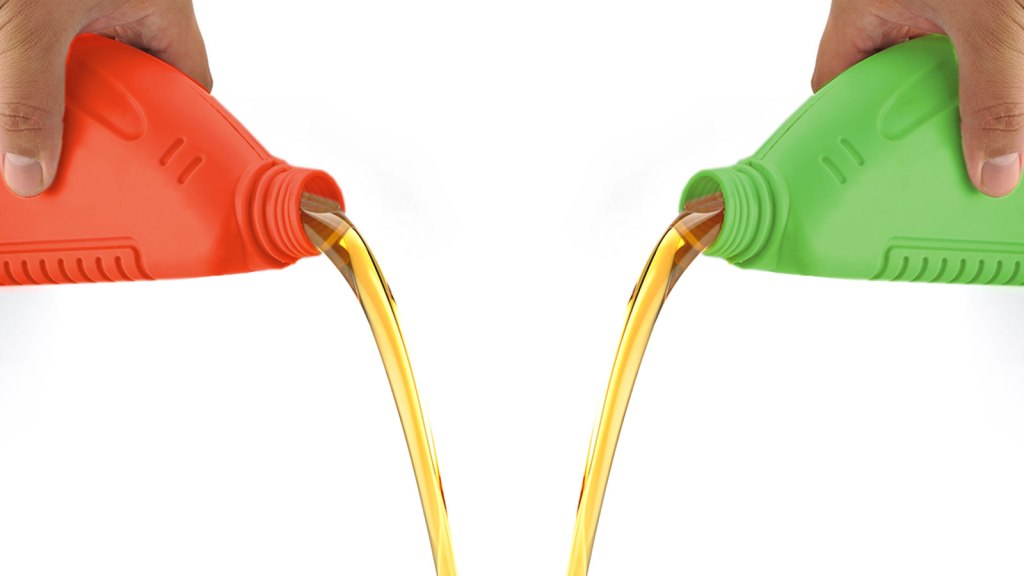 Q. My new car requires synthetic oil. Rather than change every 5,000 miles, I can go 7,500. Each oil change is a higher cost, but it nearly averages with fewer changes. I use less oil and fewer filters, but what about the overall manufacturing pollutants and carbon footprints of the two oils?

In the world of persistent myths, “Change your oil every 3,000 miles” ranks right up there with “Don’t go swimming after you eat” and “Liquor before beer, never fear” (my sophomore-year self would love to have a few words with whoever came up with that one). So it’s wonderful to hear you’re already enlightened on the truth about oil changes: There’s no reason to waste time, money, and oil on such frequent flushes, especially with newer vehicles. Depending on what your owner’s manual instructs, you can get anywhere from 5,000 to a whopping 25,000 miles between changes. Numbers like that require the use of synthetic oil over the conventional stuff, though, which brings us to your query.

Some cars, like yours, demand synthetic oil. Many auto experts recommend it for the rest of them chiefly because it lets you extend the interval between oil changes. Why? Let’s back up a minute. Synthetic oil is, as you may have guessed, man-made. Often, it’s cooked up in a lab by chemically converting one type of hydrocarbon molecule into another (called polyalphaolefin oil, or PAO, for the acronym trackers out there). Some brands do come from a crude oil base, just like the standard goop, while others come from natural gas, “agricultural ingredients,” or even beef tallow. Because it’s engineered specifically for engine lubrication, synthetic oil is purer, thinner (the better to grease moving engine parts), stable in temperature extremes, and resistant to breakdown. In short, it’s much better, and therefore lasts much longer, than standard oil.

Conventional oil, on the other hand, is mostly crude (from a petroleum base), with some additives thrown in to help it do its job under your hood. The stuff usually contains some impurities, like sulfur or heavy metals, and thickens and degrades over time, which means more frequent trips to the lube shop.

Synthetic sure sounds like a winner, doesn’t it? But you asked about the impact of manufacturing each type of oil, D., and here’s where the differences get a little slippery. Conventional oil comes from fossil fuel that we’d all do well to avoid, and must be extracted from the ground, shipped, and refined into car-ready shape. But synthetic oil is no angel, either: Its manufacture requires the use of nasty chemicals. Not only that, but the California Environmental Protection Agency reports that it takes three times more energy to produce synthetic oil than to refine conventional oil.

Still, I think you should rest easy knowing your car’s veins pump synthetic. Why? One of the biggest environmental issues with motor oil is what to do with it once it’s spent. A lot of that sludge ends up burned for fuel in power plants or industrial boilers, a dirty process that spews carbon and heavy metals. Some of it ends up leaking and running into our water supplies. And some of it does get recycled into fresh motor oil, the best possible outcome — re-refining oil takes less energy than starting from scratch — but that fate currently awaits only about 10 percent of our supply.

So the less oil we use in our cars, the better. And as synthetic oil lasts up to five times longer than conventional oil, that translates to far fewer quarts that need refining to freshen up your engine, and far fewer quarts that need disposal when the oil finally quits. The longevity of synthetic oil goes a long way toward making up for its higher initial energy use, too.

And that’s not all synthetic has going for it. Because it’s a more effective lubricant, synthetic oil provides a small but appreciable boost in your car’s fuel economy — an improvement of roughly two percent. Those smoothly pumping pistons also cut down on wear and tear on your engine, extending the life of your car and delaying the need for an energy- and resource-intensive replacement. And finally, according to the California EPA, synthetic oil biodegrades more rapidly, reducing the damage if any does seep into a storm drain.

Synthetic oil is far from perfect, D., but so is everything else related to cars. If you’re going to drive, you’re better off doing it with a synthetically humming engine. If you’re after an even bigger environmental impact, park that car and take the bus. But I’ll bet you already knew that.