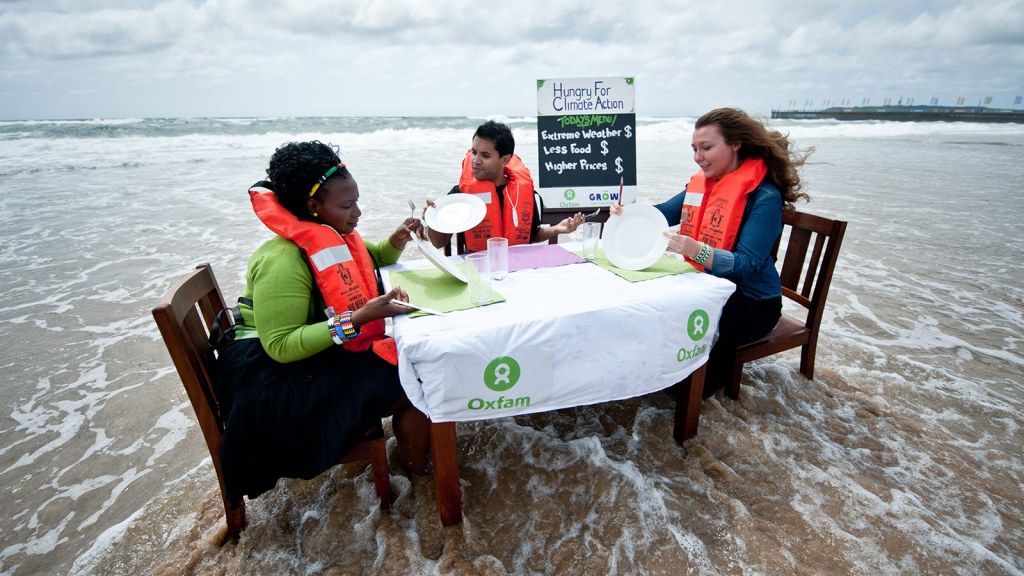 Poor countries will need at least twice as much money as we thought in order to successfully adapt to climate change — and possibly five times as much by mid-century. That’s according to a new, more comprehensive assessment by the U.N. Environment Program. The findings shake things up quite a bit.

Some history, real quick: Back in 2009, at the Copenhagen climate summit, rich countries agreed that they would need to do something to help poor countries deal with what centuries of spewing carbon into the atmosphere had wrought. The rich countries were largely responsible for said spewing, while the poorer countries only recently started spewing themselves, if they ever started at all. The U.N. agreed upon a $100-billion-per-year price tag — worked out over the next few summits based on calculations by the World Bank — for helping poor countries to adapt while developing their economies along sustainable lines. Wealthy countries agreed to start contributing that much each year by 2020.

But according to the new UNEP report, rich countries only mobilized around $25 billion between 2012 and 2013 to help poor countries adapt. This year, Christiana Figueres, head of of the U.N. Framework Convention on Climate Change, also set a goal of getting $10 billion into the Green Climate Fund, a mechanism for funneling funding to climate change–related projects in the developing world, and that goal has just been met. But these sums are only a fraction of the amount that countries are supposed to pony up six years from now. And now, using the new report’s figures for what adaptation will cost (somewhere between $200 billion and $500 billion per year), that fraction just got even smaller. Eek.

And there’s further bad news: These $200-billion-to-$500-billion-a-year figures assume that negotiators are able to strike a deal to avoid 2 degrees Celsius of warming, the cutoff point scientists have suggested to keep the effects of global warming somewhat contained. Increasingly, it is looking like an emissions-reducing U.N. deal may come, but it will not be sufficient to stay below that 2-degree target. And if we don’t stay below it, climate change will strike harder, and the cost of helping poor countries adapt will be even higher. Put bluntly: “If you don’t cut emissions, we’re just going to have to ask for more money because the damage is going to be worse” — that’s Ronald Jumeau of the Seychelles, a small-island nation off the east coast of Africa, during this month’s U.N. negotiations, where he is a spokesperson for a coalition of small-island states.

The report notes that estimating the cost of adaptation is a lot harder than estimating the cost of greening the international economy. Even so, the numbers in this report are not likely to be an overestimation — if anything, they’re an underestimation. As climate change continues, more and more frequently, to rear its ugly head, researchers will realize that there are components of adaptation that have not yet been studied and priced, but that nonetheless will have to be paid for.

Where will that money come from? That’s a question that negotiators aren’t much closer to answering now than they were back when they agreed to raise $100 billion a year. But it’s on the agenda for the climate conference currently underway in Lima, Peru, where “high-level” talks begin this week.