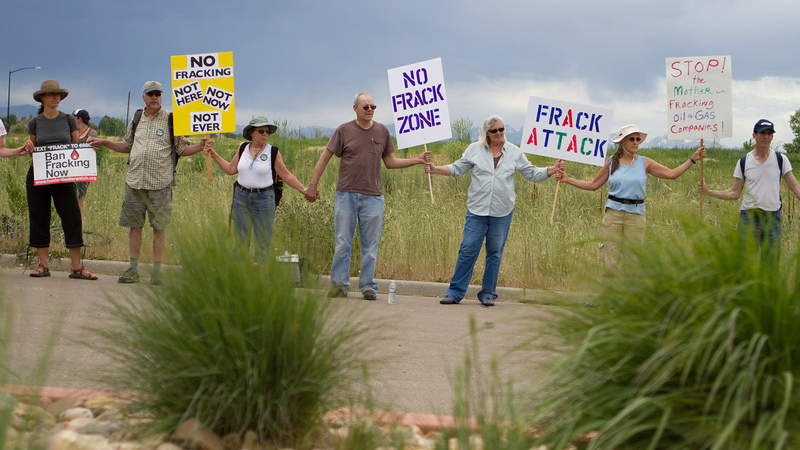 Two anti-fracking initiatives will not be on the ballot in Colorado this November, the Colorado secretary of state’s office announced on Monday.

Initiative 78 would have prohibited fracking within 2,500 feet of an occupied building and Initiative 75 would have allowed local governments to ban fracking. Previously, cities in Colorado have tried to ban fracking, only to have the bans overturned by the state Supreme Court.

Supporters gathered about 107,000 signatures for each initiative — in both cases, more than the 98,492 required. But the signatures have to be deemed valid by Secretary of State Wayne Williams. In a random sample of 5 percent of the signatures, he could only verify around 80 percent of them. Projecting that rate over the total number of signatures suggests that both initiatives would get around 85,000 valid signatures and fall short.

But Lauren Swain, an activist who worked as a paid signature gatherer for the initiatives and serves on the board of 350 Colorado, says the campaign will challenge Williams’ ruling. “There’s a high likelihood that the reasons are not valid” for throwing out signatures, she told Grist. She believes his office is biased against the anti-fracking movement, noting that his spokeswoman Lynn Bartels tweeted irrelevant and unflattering information about their petition gathering. Any challenge must be submitted within a month, so there should be a final answer on whether the initiatives will make the ballot by around the end of September.

Anti-fracking activists have faced overwhelming opposition from the state’s political establishment and fossil fuel industry. As Politico recently reported, “Two oil and gas companies with large footprints in the state, Noble and Anadarko, gave more than $11 million this year to Protect Colorado, an umbrella group launched to fight the initiatives. … The anti-fracking campaign, meanwhile, had raised just $424,000 as of Aug. 1.”

Williams is a Republican, but many Colorado Democrats, such as Gov. John Hickenlooper, also oppose the initiatives. “There’s not a lot of daylight between the parties when it comes to establishment politicians on this issue,” Swain said.