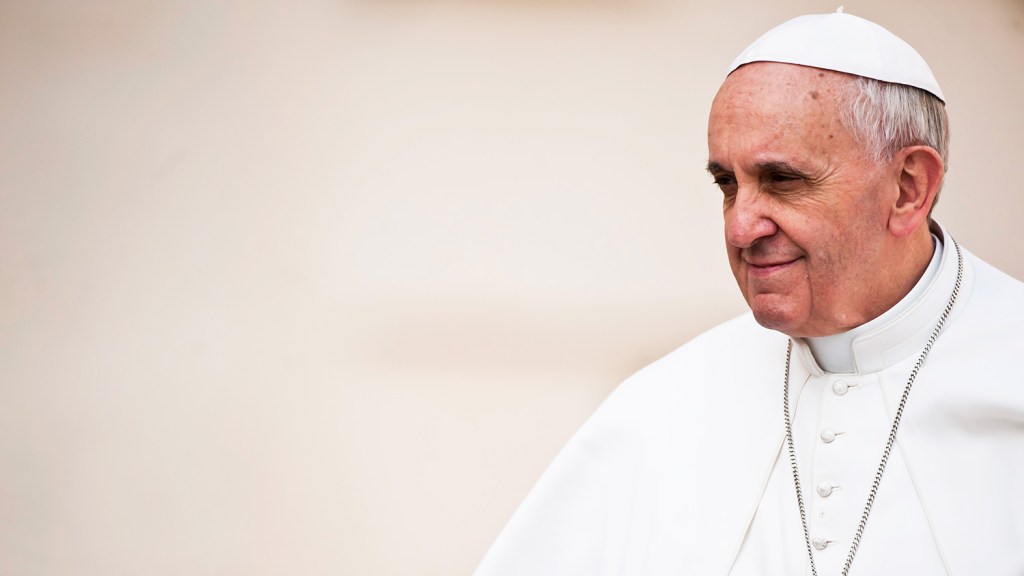 At the very beginning of 2014, we reported that Pope Francis had begun drafting a big green manifesto to guide the world’s 1.2 billion Catholics in their interactions with creation — that is, pretty much everything they do. As the year draws to a close, the environmental edict has at last been scheduled for publication next March, on the heels of a papal visit to Tacloban, the Philippine city most thoroughly destroyed by Typhoon Haiyan in 2013.

Pope Francis cannot be blamed for the slow progress on his big encyclical, a letter from the papacy to all bishops of the Roman Catholic Church. He was busy getting shit done in 2014. Just in the past few weeks, he’s helped put the U.S. and Cuba back on speaking terms, and used his traditional Christmas speech to sharply criticize Vatican officials for their gossiping, power-hungry ways.

The forthcoming encyclical on climate change and human ecology is so important to Francis that he plans to distribute the 50- to 60-page document to the whole Catholic world, from priests to parishioners. The Guardian‘s John Vidal reports that this pronouncement is a key piece of the Holy Father’s grand plan to influence next year’s United Nations climate talks in Paris, where the world’s countries will try to end 20 years of climate change disagreement. Also on the docket for 2015: a trip to New York in September to meet with other global religious leaders, and then address the U.N.’s general assembly as it sets new anti-poverty and environmental goals.

No contents of the encyclical have been leaked, which these days means the procrastinating pope probably hasn’t written a word yet. But we can make some guesses as to what he might pontificate based on what he’s had to say this year on nature, humanity, and our economic system — which His Holiness equates with idolatry.

In May, on knowledge:

Creation is not a property that we can rule over at will, or, even less, the property of only a few. … Safeguard creation. Because if we destroy creation, creation will destroy us!

In October, to landless peasants from Latin America and Asia, as well as other social activists:

An economic system centered on the god of money needs to plunder nature to sustain the frenetic rhythm of consumption that is inherent to it. … The monopolising of lands, deforestation, the appropriation of water, inadequate agro-toxics are some of the evils that tear man from the land of his birth. Climate change, the loss of biodiversity and deforestation are already showing their devastating effects in the great cataclysms we witness.

And in November, from a letter to Australian Prime Minister Tony Abbott:

[T]here are constant assaults on the natural environment, the result of unbridled consumerism, and this will have serious consequences for the world economy.

Capitalism is an easy punching bag for anyone who thinks people and other life are more important than material wealth, but coming up with something better and a plan to get there peacefully is, of course, the complicated part. Perhaps the pontifical proclamation will lay out his vision for transforming the world economy into something, say, smaller and less destructive. In which case I’m converting to Catholicism.