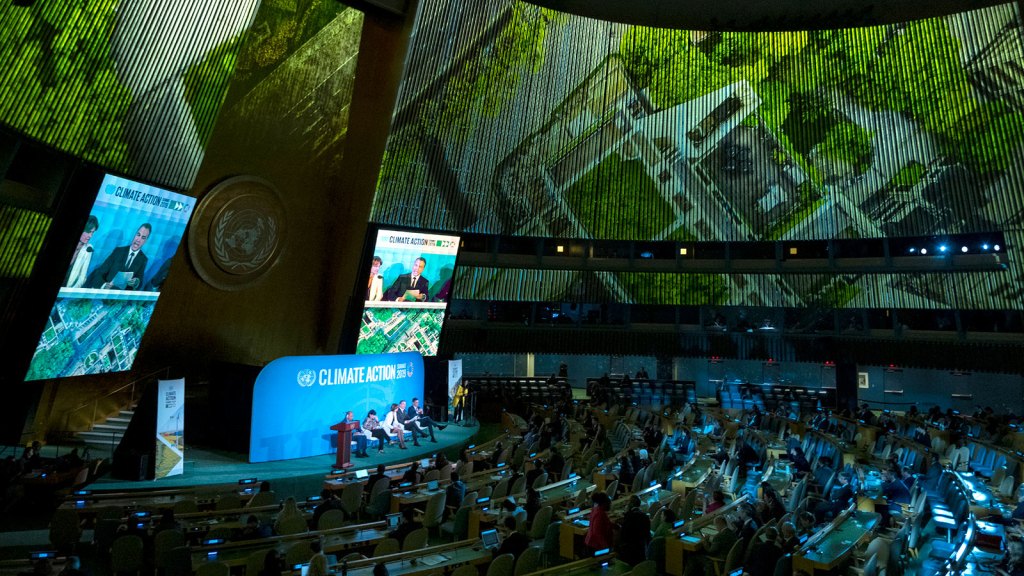 United Nations Secretary-General António Guterres had expressed high hopes for Monday’s U.N. Climate Action Summit in New York City. Guterres personally reached out to many countries’ leaders ahead of time and told them, “[D]on’t come to the Summit with beautiful speeches. Come with concrete plans.”

But in the chambers of the General Assembly, the world’s top polluters — China, India, and the United States — made no major commitments to slash investments in fossil fuels and reach net-zero emissions by 2050.

Instead, the most aggressive and ambitious commitments came from small countries, especially coastal and island states most vulnerable to the climate crisis. And those small countries are not happy to be doing the heavy lifting while the countries most responsible for climate change twiddle their thumbs.

Wilfred Elrington, minister of foreign affairs in Belize, suggested that underdeveloped coastal countries — which are on the front lines of climate change due to rising sea levels — have a deeper understanding of what the world is up against on account of their firsthand experience with havoc-wreaking tropical storms like Hurricane Dorian, Typhoon Haiyan, and Cyclone Idai in recent years. “Unless you have experienced this kind of devastation, it is really hard to understand how difficult and how absolutely destructive it is,” said Elrington, explaining why immediate action is needed.

Among the commitments made by smaller, less developed countries were promises to invest in more renewable energy and withdraw investments from fossil fuels. The Marshall Islands, for instance, unveiled a plan to reach net-zero emissions by 2050, an ambitious goal for an island country that relies on fossil fuel imports. A group of 15 other countries, including Belize, Costa Rica, Fiji, Grenada, Saint Lucia, and Vanuatu, pledged to do the same.

Bigger nations did make some meaningful promises. Indian Prime Minister Narendra Modi pledged that India will increase its renewable energy production capacity from 175 gigawatts to 450 gigawatts by 2022. Germany, one of the world’s biggest users of coal, committed to ending its reliance on the dirtiest fossil fuel. And Germany, South Korea and the U.K. announced they’d double their investments in the Green Climate Fund, a U.N. program that helps developing countries invest in renewables.

Still, outside observers noted the relative lack of urgency from developed countries at the summit. “While countries were expected to come to the summit to announce that they would enhance their climate ambition, most of the major economies fell woefully short,” said Andrew Steer, President and CEO of the World Resources Institute, a think tank, in a statement on Monday. “Their lack of ambition stands in sharp contrast with the growing demand for action around the world.”

Secretary-General Guterres, in his closing remarks, said, “You have delivered a boost in momentum, cooperation and ambition. But we have a long way to go.”