Hello everyone, and welcome to week 8 of Parched. Jake Bittle here. Last week, my colleague Emily Pontecorvo told you about a water-saving solution for agriculture; today, I’m going to describe a neat trick that helps cities save water in drought times.

Earlier this year, the desert city of Provo, Utah, received a sizable grant from the Federal Emergency Management Agency, or FEMA, to help bolster its water supply. The dense suburban enclave and growing tech capital has struggled to balance water needs against a booming population; the new grant gives it $50 million to tap the Provo River and treat it for drinking. But this water isn’t bound for sinks and showers. Instead, it is going to be pumped to the outskirts of town and injected underground, allowing it to seep into layers of sand and rock.

This technique is called “aquifer recharge,” and it’s becoming a go-to way for Western cities to ensure they have ample water supplies during drought periods. Underground rock formations — usually deposits of porous stone surrounded by layers of impermeable rock — act as savings accounts for water, allowing cities to store resources there until they need them, then pump them up to the surface. The water can also be used to boost the health of aquifers that may have been overtapped.

A generation ago, most big water supply projects focused on moving river water to cities and farms for short-term consumption. California pumped water from the Sierra Nevada down to Los Angeles through a series of waterways and channels, and Arizona tapped the Colorado River with a giant canal, the Central Arizona Project. These cities took as much water as they needed, and stored any excess in artificial lakes — systems infamous for letting water go to waste through evaporation and disrupting natural environments.

The two-decade-long megadrought in the West, however, has forced some communities to take a more frugal approach. Water managers in areas from Austin, Texas, to California’s Central Valley have pursued aquifer storage programs in recent years to reduce their reliance on fickle river supplies. These storage aquifers can also rejuvenate nearby riverbeds and fields, bringing secondary benefits by helping to quench the thirst of natural ecosystems.

These projects follow the example of the 26-year-old Arizona Water Banking Authority, or AWBA, which since 1996 has acted as a savings account for the state’s Colorado River water. When a city or tribe wants to make a deposit into the bank, they leave water in the Central Arizona Project canal system rather than withdrawing their full share. The water is then conveyed to one of several so-called “underground storage facilities” managed by the Central Arizona Project. These storage areas look like broad, shallow swimming pools in the middle of the desert: Water sits out in the open-air pools and seeps down into the underground aquifer over days and weeks. Once there, it clings to stones and sand, safe from the evaporating sun. When a city or tribe deposits water, the authority issues it a “credit” that it can redeem later for makeup supply during a water shortage. 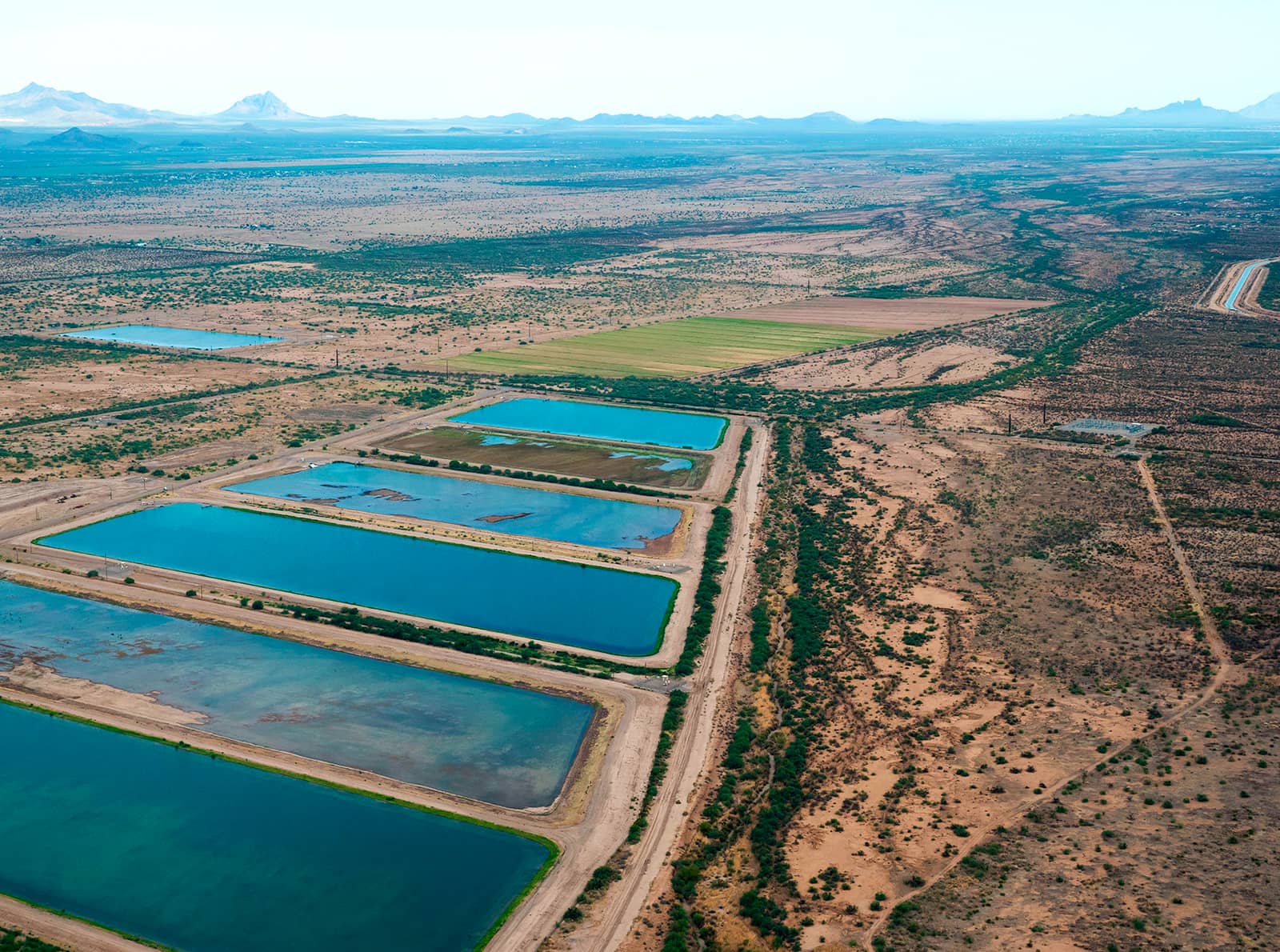 Arizona cities and tribes have deposited almost 4 million acre-feet of water into dozens of different storage facilities since the program began, or almost double the annual water usage of the Phoenix metropolitan area. The authority has also banked about 600,000 acre-feet on Nevada’s behalf.

Virginia O’Connell, the executive director of the Arizona Water Banking Authority, said the savings have given the state a cushion against the ongoing megadrought.

“Over the last 20 years, having stored all that water, we helped the aquifers,” O’Connell told Grist. “Now, we’re transitioning to the point where we may need to start tapping into some of that supply. If the water bank did not exist, there would be no supplies now going into the future.”

Until this year, when the Gila River Indian Community claimed water from the bank to make up for a shortage on the Colorado River, no one had ever made a withdrawal. In the end, the bank didn’t need to extract any water; instead it satisfied its obligation to the Gila in the form of extra water delivered in previous years. But the state is working to build several new recovery pumps to enable future withdrawals.

And despite the large amount of banked water, O’Connell warns that supplies could dwindle if drought continues and the state doesn’t manage its resources.

“It is a finite supply of credits,” said O’Connell. “Given the hydrologic conditions now with the drought, there’s not excess water available anymore for the water bank to store. So the credits that we have have to last a long time, and we want to use those very judiciously.”

Even so, Arizona is better off than neighboring states that haven’t banked water. And as more Western cities learn the lessons of the megadrought, it’s a safe bet a lot more excess water will start flowing underground — at least as long as there is any excess water to store.

Inside the two-day scramble to add drought funding to the climate law
By Maxine Joselow, Washington Post
◆ Read more